The United Nations Development Programme (UNDP) is the United Nations' global development network. It promotes technical and investment cooperation among nations and advocates for change and connects countries to knowledge, experience and resources to help people build a better life for themselves. The UNDP provides expert advice, training and grants support to developing countries, with increasing emphasis on assistance to the least developed countries. UNDP works with nations on their own solutions to global and national development challenges. As they develop local capacity, they draw on the people of UNDP and its wide range of partners. However UNDP offers to help only if the different nations request it to do so.[3]

The UNDP is funded entirely by voluntary contributions from UN member states. The organization operates in 177 countries, where it works with local governments to meet development challenges and develop local capacity. It works internationally to help countries achieve the Sustainable Development Goals (SDGs). UNDP was one of the main UN agencies involved in the development of the Post-2015 Development Agenda. To accomplish the SDGs and encourage global development, UNDP focuses on poverty reduction, HIV/AIDS, democratic governance, energy and environment, social development, and crisis prevention and recovery. The UNDP Human Development Report Office also publishes an annual Human Development Report (since 1990) to measure and analyse developmental progress. In addition to a global Report, UNDP publishes regional, national, and local Human Development Reports.[4] Headquartered in New York City, the status of UNDP is that of an executive board within the United Nations General Assembly. The UNDP Administrator is the third highest-ranking official of the United Nations after the United Nations Secretary-General and Deputy Secretary-General.[5]

The UNDP was founded on 22 November 1965 with the merging of the Expanded Programme of Technical Assistance (EPTA) and the Special Fund.[6] The rationale was to "avoid duplication of [their] activities". The EPTA was set up in 1949 to help the economic and political aspects of underdeveloped countries while the Special Fund was to enlarge the scope of UN technical assistance. The Special Fund arose from the idea of a Special United Nations Fund for Economic Development (SUNFED) (which was initially called the United Nations Fund for Economic Development (UNFED).[7]

Countries such as the Nordic countries were proponents of such a United Nations (UN) controlled fund. However, the fund was opposed by developed countries, especially by the United States who was wary of the Third World dominating such a funding and preferred it to be under the auspices of the World Bank. The concept of SUNFED was dropped to form the Special Fund. This Special Fund was a compromise over the SUNFED concept, it did not provide investment capital, but only helped to bring pre-conditions for private investment.

With the US proposing and creating the International Development Association within the World Bank's umbrella, the EPTA and the Special Fund appeared to be conducting similar work. In 1962, the United Nations Economic and Social Council asked the Secretary General to consider the merits and disadvantages of merging UN technical assistance programs and in 1966, the EPTA and the Special Fund merged to form the UNDP.[8][9][10]

The following table lists the top 15 DAC 5 Digit Sectors[12] to which UNDP has committed funding, as recorded in its International Aid Transparency Initiative (IATI) publications. The UNDP claims on the IATI Registry website that the data covers 100% of development flows.[13]

UNDP topped the Aid Transparency Index published by Publish What You Fund in 2015 and 2016. "The United Nations Development Programme (UNDP) tops the Index for the second time with an excellent score of 93.3%, the only organisation to score above 90%".[14]

UNDP helps countries develop strategies to combat poverty by expanding access to economic opportunities and resources, linking poverty programmes with countries’ larger goals and policies, and ensuring a greater voice for the poor. It also works at the macro level to reform trade, encourage debt relief and foreign investment, and ensure the poorest of the poor benefit from globalisation. On the ground, UNDP sponsors developmental pilot projects, promotes the role of women in development, and coordinates efforts between governments, NGOs, and outside donors. In this way, UNDP works with local leaders and governments to provide opportunities for impoverished people to create businesses and improve their economic condition.

The UNDP united nation development programme International Policy Centre for Inclusive Growth (IPC-IG) in Brasília, Brazil expands the capacities of developing countries to design, implement and evaluate socially inclusive development projects. IPC-IG is a global forum for South-South policy dialogue and learning, having worked with more than 7,000 officials from more than 50 countries.

A 2013 evaluation of the UNDP's poverty reduction efforts states that the UNDP has effectively supported national efforts to reduce poverty, by helping governments make policy changes that benefit the poor.[15] Nevertheless, the same evaluation also states there is a strong need for better measurement and monitoring of the impacts of the UNDP's work.[16] The UNDP's Strategic Plan 2014-2017 incorporates the recommendations of this poverty evaluation.[17]

UNDP works to reduce the risk of armed conflicts or disasters, and promote early recovery after crisis have occurred. UNDP works through its country offices to support local government in needs assessment, capacity development, coordinated planning, and policy and standard setting.

Examples of UNDP risk reduction programmes include efforts to control small arms proliferation, strategies to reduce the impact of natural disasters, and programmes to encourage use of diplomacy and prevent violence. Recovery programmes include disarmament, demobilization and reintegration of ex-combatants, demining efforts, programmes to reintegrate displaced persons, restoration of basic services, and transitional justice systems for countries recovering from warfare.

Between 1996 and 1998, the UNDP sponsored the deployment of 45 Multifunction Platforms (MFP) in rural Mali. These installations, driven by a diesel engine, power devices such as pumps, grain mills and appliances.[18] By 2004, the number of MFPs in Mali reached 500.[19]

In 2012 the Biodiversity Finance Initiative (BIOFIN) was established. BIOFIN brings 30 countries together to develop and implement evidence-based finance plans to safeguards biodiversity. BIOFIN has developed an innovative and adaptable methodology to guide countries to analyse the policy and institutional context for biodiversity finance; measure the current biodiversity expenditures; assess future financial needs; and identify the most suitable finance solutions to achieve national biodiversity targets.[20]

UNDP works to help countries prevent further spreading of and reduce the impact of HIV/AIDS, convening The Global Commission on HIV and the Law which reported in 2012.[21] 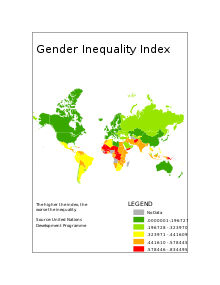 The Gender Inequality Index is one such topic discussed in the Human Development Report.

The UNDP spends about 0.2% of its budget on internal evaluation of the effectiveness of its programmes.[23] The UNDP's Evaluation Office is a member of the UN Evaluation Group (UNEG) which brings together all the units responsible for evaluation in the UN system. Currently the UNEG has 43 members and 3 observers.[24]

The UNDP runs six GPCs, including the Seoul GPC on partnerships, and the Global Center for Public Service Excellence that issues the 'Raffles Review' email newsletter on developments in public administration research.

UNDP plays a significant co-ordination role for the UN's activities in the field of development. This is mainly executed through its leadership of the UN Development Group and through the Resident Co-ordinator System.

The United Nations Development Group (UNDG) was created by the Secretary General in 1997, to improve the effectiveness of UN development at the country level. The UNDG brings together the operational agencies working on development. The Group is chaired by the Administrator of UNDP. UNDP also provides the Secretariat to the Group.

The Resident Coordinator (RC) system co-ordinates all organizations of the United Nations system dealing with operational activities for development in the field. The RC system aims to bring together the different UN agencies to improve the efficiency and effectiveness of operational activities at the country level. Resident Coordinators lead UN country teams in more than 130 countries and are the designated representatives of the Secretary-General for development operations. Working closely with national governments, Resident Coordinators and country teams advocate the interests and mandates of the UN drawing on the support and guidance of the entire UN family. It is now coordinated by the UNDG.[25]

In August 2016, Israel's Shin Bet security agency went public with the arrest of Wahid Abdallah al Bursh, a Palestinian engineer with the United Nations Development Programme. In its statement, Shin Bet said that Wahid had confessed to being recruited in 2014 to help Hamas.

Among "various assignments" he performed on behalf of Gaza's dominant Islamist group was assistance in building a maritime jetty for its fighters "using UNDP resources," the Shin Bet statement said without providing further details on that charge.

It said Bursh also persuaded his UNDP superiors to prioritize the neighborhoods of Hamas operatives when earmarking money for reconstruction in Gaza, which was devastated by the 2014 war with Israel.[27]

The UNDP has been criticised by members of its staff and the Bush administration of the United States for irregularities in its finances in North Korea. Artjon Shkurtaj claimed that he had found counterfeit US dollars in the Programmes safe while the staff were paid in Euros. The UNDP denied any wrongdoing, and keeping improper accounts.[28]

In addition to his or her responsibilities as head of UNDP, the Administrator is also the Vice-Chair of the UN Sustainable Development Group.[31][32]

The position of Administrator is appointed by the Secretary-General of the UN and confirmed by the General Assembly for a term of four years.[33]

Achim Steiner is the current Administrator.[34] The five countries on the UNDP board have some influence over selection of the administrator.[citation needed]

The first administrator of the UNDP was Paul G. Hoffman, former head of the Economic Cooperation Administration which administered the Marshall Plan.

Other holders of the position have included: Bradford Morse, former Republican congressman from Massachusetts; William Draper, venture capitalist and friend of George H.W. Bush who saw one of the UN system's major achievements, the Human Development Report, introduced during his tenure; Mark Malloch Brown, who was previously Vice President of External Affairs at the World Bank and subsequently became UN Deputy Secretary General. Kemal Derviş, a former finance minister of Turkey and senior World Bank official, was the previous UNDP Administrator. Derviş started his four-year term on 15 August 2005.

During meetings of the UN Sustainable Development Group, which are chaired by the Administrator, UNDP is represented by the Associate Administrator.[citation needed] The position is currently held by Tegegnework Gettu, appointed on 1 December 2015. He is also currently service as Director a.i., for the Africa Region.

Assistant Administrators of the UNDP, Assistant United Nations Secretaries General and Directors of the Regional Bureaus are

UNDP, along with other UN agencies, has long enlisted the voluntary services and support of prominent individuals as Goodwill Ambassadors to highlight these causes. Their fame helps amplify the urgent and universal message of human development and international cooperation, helping to accelerate achievement of the Millennium Development Goals. They articulate the UNDP development philosophy and programmes of self-reliant opportunities and motivate people to act in the interest of improving their own lives and those of their fellow citizens.