United Counties of Prescott and Russell

The United Counties of Prescott and Russell (French: Comtés unis de Prescott et Russell) are consolidated counties located in the Canadian province of Ontario. Its county seat is L'Orignal.[2] It was created as a result of a merger between Russell County and Prescott County in 1820. It is located in Eastern Ontario, in the wedge-shaped area between the Ottawa River and St. Lawrence River, approximately 55 km east of the City of Ottawa.

The United Counties are bordered by the Ontario/Quebec border to the east, and the Ottawa River to the north. It is crossed by the South Nation River that connects the Larose Forest and Alfred Bog. Ontario Ministry of Natural Resources has designated the Alfred Bog "a provincially significant wetland and an Area of Natural and Scientific Interest." Species of interest include the palm warbler, northern pitcher-plant, pink lady's-slipper, cottongrass, bog elfin and bog copper butterflies, and ebony boghaunter dragonfly. It also hosts one of the most southerly herds of moose. The bog is open to the public with a 272-metre boardwalk for nature walks.[4]

Prescott and Russell has a large Franco-Ontarian population, and is (by percentage) the most francophone census division in Canada west of Quebec. In 2011 French was the sole mother tongue of 64.2% of its residents, and an additional 1.7% reported being natively bilingual in French and English.[11] 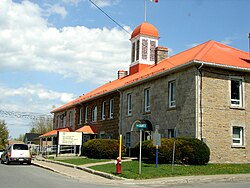 There are many public libraries located in the county. The largest is the Hawkesbury Public Library, which is located in Hawkesbury.

There are two hospitals in Prescott-Russell: Hawkesbury and District General Hospital, in Hawkesbury, and the Glengarry Memorial Hospital, a rural hospital in Alexandria, Ontario. Also, there is a medevac helicopter, in Ottawa, Ontario. The two hospitals have seen an increase in wait times due to an influx of patients from Quebec.[12] The Government of Quebec has stalled efforts to build a second hospital in Western Quebec and it is not known when funding will be made available.

The counties are served by numerous commuter bus lines running to Ottawa, which are mainly operated by private contractors. The route numbers are part of the Rural Partners Transit Service of OC Transpo. Communities served include Rockland (with 10-12 trips in rush hour), Hawkesbury, Bourget, Casselman, Russell, and Embrun.

Greyhound Canada buses between Ottawa and Montreal and Ottawa and Cornwall also service communities in the counties.

The county is policed by the Ontario Provincial Police (OPP). There are two main police stations in Prescott and Russell; one in Embrun and one in Hawkesbury. In addition, there is a police station in Rockland that acts as a satellite to the one in Embrun.[13] The OPP is also in charge of patrolling Highway 417.