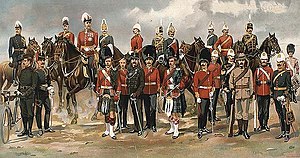 A variety of uniforms used in the Canadian Militia, 1898.

A uniform is a type of clothing worn by members of an organization while participating in that organization's activity. Modern uniforms are most often worn by armed forces and paramilitary organizations such as police, emergency services, security guards, in some workplaces and schools and by inmates in prisons. In some countries, some other officials also wear uniforms in their duties; such is the case of the Commissioned Corps of the United States Public Health Service or the French prefects. For some organizations, such as police, it may be illegal for non members to wear the uniform. 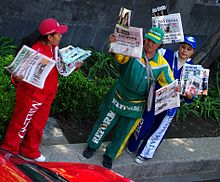 Uniformed newspaper vendors in Mexico City. Some work places require their employees to wear a uniform.

Workers sometimes wear uniforms or corporate clothing of one nature or another. Workers required to wear a uniform include retail workers, bank and post office workers, public security and health care workers, blue collar employees, personal trainers in health clubs, instructors in summer camps, lifeguards, janitors, public transit employees, towing and truck drivers, airline employees and holiday operators, and bar, restaurant and hotel employees. The use of uniforms by these organizations is often an effort in branding and developing a standard corporate image but also has important effects on the employees required to wear the uniform.

The term uniform may be misleading because employees are not always fully uniform in appearance and may not always wear attire provided by the organization, while still representing the organization in their attire. Academic work on organizational dress by Rafaeli & Pratt (1993) referred to uniformity (homogeneity) of dress as one dimension, and conspicuousness as a second.[2] Employees all wearing black, for example, may appear conspicuous and thus represent the organization even though their attire is uniform only in the color of their appearance, not in its features. Pratt & Rafaeli, (1997) described struggles between employees and management about organizational dress as struggles about deeper meanings and identities that dress represents.[3] And Pratt & Rafaeli (2001) described dress as one of the larger set of symbols and artifacts in organizations which coalesce into a communication grammar.[4] 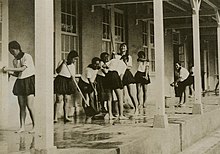 Taiwan schoolgirls in uniform during the time of Japanese rule there, 1927.

Countries with mandatory school uniforms include Japan, South Korea, Hong Kong, Thailand, India, Australia, U.A.E, Singapore, Albania, Philippines, some schools in Taiwan, New Zealand, South Africa, Indonesia and the United Kingdom, among as many other places. In some countries, uniform types vary from school to school, but in the United Kingdom, many pupils between 11 and 16 of age wear a formal jacket, tie and trousers for boys and blouse, tie and trousers, skirt, or culottes for girls. The ties will have a set pattern or a logo embroidered for the school, and jackets will usually carry a badge on the breast pocket with the school's name, coat of arms, and motto or emblem. Jackets are being replaced in many schools by sweatshirts bearing the school badge. Children in many United Kingdom state primary schools will have a uniform jumper and/or polo shirt with the school name and logo.

From about 1800 to after the Second World War, diplomats from most countries (and often senior non-military officials generally) wore official uniforms at public occasions. Such uniforms are now retained by only a few diplomatic services, and are seldom worn.

A prison uniform is any uniform worn by individuals incarcerated in a prison, jail or similar facility of detention.

Most, if not all, sports teams also wear uniforms, made in the team's distinctive colors. In individual sports like tennis and golf, players may choose any clothing design allowed by the competition rules.

To prevent the confusion (for officials, players, and fans) that might result from two opposing teams wearing uniforms (kits) with similar colors, teams have different variations for "home" and "away" games, where typically one is dark and the other is light. In the four major North American sports leagues, one of the two uniforms is almost always predominantly white, and each league except for the National Basketball Association (NBA) has a rule to determine which team should normally wear its white uniform. Customarily, National Football League (NFL) and National Hockey League (NHL) teams wear their color uniforms for home games. By contrast, Major League Baseball (MLB) teams wear their white uniforms for home games. The NBA traditionally required home teams to wear white, or at least a light color, but as of the 2017–18 season allows home teams to wear any uniform color, mandating only that away teams wear a color that sufficiently contrasts with the home team's choice.[5] These rules are not strictly enforced, however, for any of the four major professional sports leagues in North America. Some NFL teams, most notably the Dallas Cowboys, prefer to wear their white jerseys for home games. When Joe Gibbs was the head coach of the Washington Redskins — first from 1981-1992, and again from 2004-2007 — the Redskins exclusively wore white jerseys at home games.[6] In the United Kingdom, especially in football, the terms "kit" or "strip" (as in 'football kit') are more common (instead of uniform). 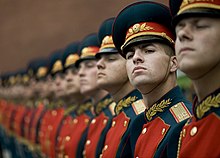 Military uniform is the standardised dress worn by members of the armed forces and paramilitaries of various nations. Military dress and military styles have gone through great changes over the centuries from colourful and elaborate to extremely utilitarian. Military uniforms in the form of standardised and distinctive dress, intended for identification and display, are typically a sign of organised military forces equipped by a central authority. The utilitarian necessities of war and economic frugality are now the dominant factors in uniform design. Most military forces, however, have developed several different uniform types.

Military personnel in most armed forces and some civilian officials may wear some or all of the following: 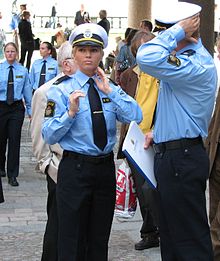 Members of the police in every country have a uniform for identification as law-enforcement personnel or agents. They are distinguished from the public by the uniform the police wear during overt policing activity. Usually each country has its own different police uniform.

Equipment - notably stethoscopes - worn like a badge of office, may accompany or replace medical uniforms.

Domestic workers are often required by their employers-managers to wear a uniform.

The beauticians use uniforms to protect their skin from harmful chemicals and acid. These chemical resistant and water proof uniforms are not only safe to work in but also provide a professional, polished appearance throughout the day. 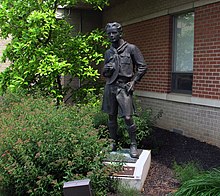 Statue of a Boy Scout in uniform. The Scout uniform is a specific characteristic of scouting used in most of their events.
See also: Uniform and insignia of the Boy Scouts of America

The Scout uniform is a specific characteristic of the Scouting movement, in the words of Baden-Powell at the 1937 World Jamboree, "it covers the differences of country and race and make all feel that they are members one with another of one World Brotherhood". The original uniform, which has created a familiar image in the public eye, consisted of a khaki button-up shirt, shorts and a broad-brimmed campaign hat. Baden-Powell himself wore shorts since being dressed like the youth contributed to reducing perceived "distance" between the adult and the young person. Nowadays, uniforms are frequently blue, orange, red, or green, and shorts are replaced by long pants in areas where the culture calls for modesty, and in winter weather. The campaign hats have also been dropped in some Scouting organisations.

Some uniforms have specially-manufactured buttons, which, in the case of antiques, often outlast the fabric components of the uniform, and become highly collectable items.[9] Nowadays, buttons come in different materials, shapes sizes and colors.

In some countries or regions such as the UK, Australia or Hong Kong, the cost of cleaning one's uniform or work clothing can be partially deducted or rebated from the personal income tax, if the organization for which the person works does not have a laundry department or an outsourced commercial laundry.[10][11]