Bachelor&#39;s degree Higher education Category:CS1 maint: archived copy as title
Academic programs up to the level of a bachelor's degree 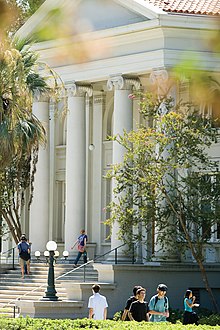 The South African system usually has a three-year undergraduate bachelor's degree, with two or three majors. (There are exceptions, such as the medical qualification (MBChB), which is six years.) A fourth year, known as an Honours year, is considered a post-graduate degree. It is usually course-driven, although may include a project or thesis. 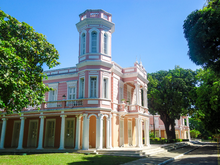 Brazil follows the major traits of the continental European system; free public schools are available from kindergarten up to postgraduation, both as a right established in Article 6, caput of the Brazilian Constitution and as a duty of the State in Article 208, Items I, IV and V, of the Brazilian Constitution.[1] Students choose their specific course of studies before joining the university. Admission to university is obtained by means of a competitive entrance exam known as Vestibular (a concept somewhat similar to the Baccalauréat in France). There's a new system, adopted by most federal universities, that uses the high school national examination (ENEM) result as part or a replacement of the Vestibular grade.[2] Depending on the chosen course, upon graduating the student shall be granted: a technologist diploma, 3 years to complete, a bachelor's degree's diploma, which usually takes 4 or, in the case of Law, Veterinary, Geology and Engineering, 5 years to complete; or a professional diploma, which normally require 5 or, in the case of medicine, 6 years to complete. 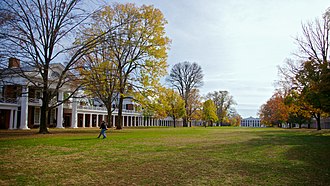 The University of Virginia

Unlike in the British model, degrees in law and medicine are not offered at the undergraduate level and instead are completed at a graduate level after earning a bachelor's degree. Neither field specifies or prefers any undergraduate major, though medical schools require a set of courses that must be taken before enrollment.[4] 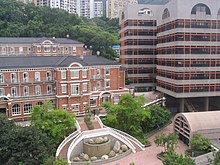 The University of Hong Kong

In Hong Kong, the English system is followed. Students sit for the Certificate of Education examinations at around sixteen years of age, and the Advanced-level, or A-level examinations at around eighteen, then follow by three years of undergraduate education, except for a few specific fields, such as medicine, nursing and law. This is due to be changed, with five-year secondary education and two-year matriculation examination combined and shortened to six years matriculation, and undergraduate education lengthened to four years. Students may be able to receive general education in their first years in universities, more akin to the North American system. The first batch of students under the new system will enter universities in 2012.

Alternatives are undergraduate certificates or diplomas, with some equivalent to associate degree in educational level.

In India the Graduation system is classified into two parts: Undergraduation (UG) and Postgraduation (PG). It takes three or four years to complete an "undergraduate" degree. The three-year undergraduate programs are mostly in the fields of arts, commerce, science etc., and the four-year programs are mostly in the fields of technology, engineering, pharmaceutical sciences, agriculture etc. However, for medicine, law and architecture, the period has been five years.[7] The possessor of the first UG is referred to as graduate and that of the PG degree as post-graduate.[8][9] Other than UG and PG there are various 1 to 2 year diploma courses available. 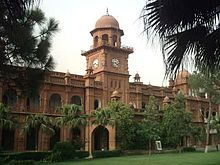 The University of the Punjab

The modern educational system comprises the following five stages: The Primary school lasting five years for children 5–10 years old in grades one to five; a Middle school of three years for children 10 to 13 years old, covering grades six through eight; a two-year secondary, or Matriculation consists of grades nine and ten, for children 13 to 15 years old; a two-year higher secondary, or Intermediate college, leading to an F.A. in arts or F.Sc. in science; and a fifth stage covering college and university programs leading to baccalaureate, professional, master's and doctorate degrees. The pre-primary or preparatory classes, called kachi (literally, unripe) or Nursery school, were formally integrated into the education system in 1988.

Students in England, Wales and Northern Ireland may usually enter university from the age of eighteen, often having studied A-levels and thus having had thirteen to fifteen years of schooling. Occasionally students who finish A Level or equivalent qualifications early (after skipping a year in school on the grounds of academic giftedness) may enter below this age but large universities are now setting minimum age limits of 16 or 17 after a number of well publicised "child prodigies" were found to be emotionally and mentally unprepared for university life.[citation needed]

Applications for undergraduate courses in UK higher education are made through the Universities and Colleges Admissions Service (UCAS).[10]

Master's degrees conferred after extended programs are not to be conflated with the degree of Master of Arts conferred at Oxbridge and Dublin, which is not a substantive qualification, but reflects the ancient practice of those three universities of promoting Bachelors of Arts to Masters of Arts (and thus full membership of the University) six or seven years after matriculation.[11]

Honours degrees and integrated master's degrees are awarded with 1st, upper 2nd, lower 2nd or 3rd class honours. If a student passes the course but fails to do so sufficiently well for third class honours to be awarded he will be awarded with an ordinary degree. It is possible to use the abbreviation "Hons" after the degree postnominals to indicate that the degree has been passed with honours and is not an ordinary degree.

Many universities offer sandwich courses or an extramural year, which offer work placements for a short period of time in a relevant industry before students complete their studies. Taking a sandwich course may make the course last a year longer than it would otherwise.

With very few exceptions, nearly all universities with the power to award degrees are heavily state financed. However, they also rely on tuition fees set by the government at a maximum index-linked level, repayable after graduation contingent on attaining a certain level of income, and with the state paying all fees for students from the poorest backgrounds. UK students are generally entitled to student loans for maintenance with repayment contingent on income.[12] Unlike in other European countries, the British government does not own the universities' assets and university staff are not civil servants. United Kingdom universities are therefore better described as autonomous, intellectually-independent institutions with public funding, rather than public universities per se. The crown does not control syllabi, with the exception of teacher training. The crown restricts the power to award degrees to those with a royal charter, in the case of traditional universities, or authorization from the Secretary of State for Universities, in the case of modern universities. Universities accredited in foreign countries, such as Richmond University are, however, free to operate.

In many countries, the English distinction between a bachelor's and master's degree is being introduced by the Bologna process. Under the new Bologna reform, universities in Europe are introducing the Bachelor level (BA or BS) degree, often by dividing a 5-year Master-level program into two parts (3-year Bachelor's + 2-year Master's), where students are not obligated to continue with the second Master's-degree part. These new bachelor's degrees are similar in structure to British bachelor's degrees.

If there is a separate undergraduate degree, higher degrees (License, Master, Doctorat) can be gained after completing the undergraduate degree. In the traditional German system, there were no undergraduate degrees in some fields, such as engineering: students continued to Master's level education without any administrative breakpoints, and employers would not consider half-finished master's degrees.

The Bachelor's phase in The Netherlands can be fulfilled either at university or at the University of Applied Sciences. Except for some specific exceptions, only at universities students are able to graduate for their masters or be promoted. These two institutions differ from each other in the level students learn abstract concepts. Whereas theories are created at the university, at the University of Applied Sciences theories are taught to be applied correctly.[13]

Students in Scotland usually enter university in the year they turn eighteen (with many still being seventeen upon starting), hence courses take an extra year compared to England, Wales and Northern Ireland.

In the sciences, students usually read for the degree of bachelor, which usually takes four years. However, as with the rest of the UK, integrated master's degrees are popular in science and engineering, although in Scotland they last for five years. Degree classification is the same as that of the rest of UK.

In many other, particularly continental European systems, an "undergraduate" degree in the American sense does not exist. Because students are expected to have received a sound general education at the secondary level, in a school such as a gymnasium or lycee, students in Europe enroll in a specific course of studies they wish to pursue upon entry into a university. In the US, students only specialize in a "major" during the last years of college. Specializing in a field of study upon entry into a university means most students graduate after four to five years of study. The fields available include those only taught as graduate degrees in the US, such as law or medicine.

In the traditional German system, there is a vocational degree (Diploma FH) that is similar in length, and is also considered an academic degree. Though it is designed as a specialist degree, in contrast to the Diplom degree at university, which claims to be more generalist. Germany itself, however, is currently abolishing the legal distinction between Fachhochschule and university. They are both translated as university and they both provide bologna-compliant and equivalent postgraduate degrees.[15]

In the French system, the first degree of tertiary education was reached two years after the baccalauréat. Amongst these degrees the university-delivered DEUG has disappeared, whereas Diplôme universitaire de technologie, Brevet de Technicien Supérieur or classe préparatoire aux grandes écoles still exist. According to the Bologna process, this two-year curriculum will be replaced by the three-year licence, yet existing.