Sweden Finland Norway
Not to be confused with Haumea.
Place in Sweden

Situated on the Ume River, Umeå is the largest locality in Norrland and the thirteenth largest in Sweden, with 89,607 inhabitants in 2019.[1] The municipality had 129,231 inhabitants as of 2020.[4] When Umeå University was established in 1965, growth accelerated, and the amount of housing has doubled in the last 30 years.[citation needed] As of 2011[update], 700 to 800 new apartments are constructed each year.[5]

Umeå is a university town and centre of education, technical and medical research in northern Sweden, with two universities and over enrolled 39,000 students.[citation needed] Umeå was the European Capital of Culture during 2014, along with Riga in Latvia.[6]

The first written mention of Umeå is from the 14th century. The northern parts of Sweden, including the counties of Västerbotten and Norrbotten, were mostly settled by nomadic Sami people before this time but not necessarily forming any permanent settlement in the city's exact location. The name is believed to be derived from the Old Norse word Úma which means roaring. The name of the town would therefore mean "The Roaring River".[7][8]

The coast came to be permanently settled by Germanic peoples moving upwards on the Bothnian Bay by boat, hence the Germanic names of towns and villages on the Westrobothnian coast. Some Kven people had permanent settlements in northern Westrobothnia (Piteå and Luleå) but were gradually assimilated with the Germanic tribes, although some Finnish names of lakes and villages survived. Southern Westrobothnia (Umeå and Skellefteå) has been a permanent Germanic settlement since at least the 14th century, but probably since the Viking ages or earlier.

Umeå in its first form was a parish with a wooden church and trade post located in the section of town now known as Backen (or Kyrkbacken). Its location near the coast and on a river was probably one of the reasons that people chose to settle there.[9]

For the next couple of centuries, Umeå was a place consisting of scattered parishes, where merchandise originating with the Sami people was traded, and was the last inhabited place before the northern wilderness took over. However, no real city was built at the location selected by the king, and it lost its town privileges in the 1590s.[9]

In 1874 the town improved the plans for its structure after it became a government requirement. Umeå had already started making these changes[12] when on 25 June 1888, a fire devastated the eastern parts of Umeå and at least 2,300 of the 3,000 inhabitants became homeless. In the restoration following the fire, almost 3,000 silver birch[13] trees were planted along wide avenues to prevent future fires from spreading. For this reason Umeå is sometimes known as "Björkarnas Stad", the "City of Birches".[14] The name of the Umeå ice-hockey team, Björklöven, means "The Birch Leaves".

View of the Ume River by its estuary Umeå

Umeå is situated on the inlet of the Gulf of Bothnia at the mouth of the Ume River, in the south of Västerbotten. Umeå is about 600 km (373 mi) north of Stockholm and about 400 km (249 mi) south of the Arctic Circle. It is the largest city north of the Stockholm-Uppsala region, and is sometimes referred to as the regional centre of northern Sweden.

The nearby community of Holmsund serves as its port. From here a ferry line connects it with the neighbouring city of Vaasa (Swedish: Vasa) in Finland. The near connections to Finland affects the population of the city - several Sweden Finns live in Umeå.

The climate of Umeå is bordering on a humid continental and a subarctic climate, with short and fairly warm summers. Winters are lengthy and freezing but usually milder than in areas at the same latitude with a more continental climate.

The population of Umeå has grown consistently since the 1960s, when the university was built. In part because of the university, the town has attracted many residents from outside of Sweden, as well as students from other regions of Sweden.

As of 2015, 10.4% of the population in the municipality of Umeå were foreign-born. The largest national origin group is from

In April 2017 the Jewish association in Umeå closed after receiving multiple threats from neo-Nazis, allegedly associated with the Nordic Resistance Movement.[18][19] 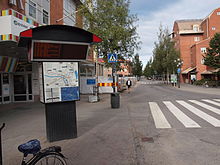 A bus stop in central Umeå

The road infrastructure includes two European highways (E4 and E12) which pass the city.[20] The local bus system is centred at Vasaplan in the city centre, and has multiple routes travelling throughout the city.[21] About 4 kilometres (2 miles) from the city centre is Umeå Airport. It is the 7th largest airport in Sweden by number of passengers, with 844,932 passengers in 2010.[22][23]

The Bothnia Line (Botniabanan) connects to Umeå from the south, it runs along the High Coast via Örnsköldsvik to Umeå. This railway was opened on 28 August 2010. The new railway line is 190 km (118 mi) long, containing 140 bridges and 25 kilometres (16 miles) of tunnels. It provides Umeå with a fast train connection to Stockholm (​6 1⁄2 hours). A new railway station, Umeå East Station, was built in connection to Norrland's University Hospital and Umeå University.

Umeå is located along the Blue Highway, which is an international tourist route from Mo i Rana, Norway to Pudozh, Russia via Finland.

The Opera of northern Sweden, the Norrland Opera, is based in the city, as is the English-language non-profit Umeå Theatre Company and the Museum of Contemporary Art and Visual Culture. The annual Umeå Jazz Festival is one of the larger Scandinavian festivals for modern jazz.

Well-known metal bands from Umeå include Cult of Luna, Hollow, Meshuggah, Nocturnal Rites, and Persuader. During the 1990s, the influence of Umeå hardcore punk bands such as Final Exit, Step Forward, Refused, Abhinanda, Shield and Doughnuts and the local labels Desperate Fight Records and Busted Heads Records led to the growth of Umeå's hardcore scene. Independent record label Ny Våg is headquartered in Umeå, and have released records of Umeå artists such as AC4, Masshysteri and Invasionen.

Umeå is the centre of television in northern Sweden; SVT Nord and TV4's northern region office are both based in the city. The main newspapers of the county of Västerbotten, Västerbottens-Kuriren and Västerbottens Folkblad are also based in Umeå.

The background and setting for the video game Unravel are based on landscapes around Umeå. 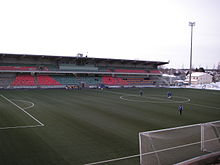 The city of Umeå currently hosts four major sports clubs. The women's football club is Umeå IK. The men's hockey team IF Björklöven was very successful in the 1980s but has been less successful in recent years. Björklöven are currently playing in the Swedish second-tier league HockeyAllsvenskan while Umeå IK plays in the top Swedish women's football league Damallsvenskan. IBK Dalen and IKSU are among the major floorball teams in Sweden; both teams has been in the Swedish Championships finals two years in a row (as of 2013[update]). Other sports clubs include IFK Umeå, Mariehem SK, Umeå FC, and Umedalens IF.

In 2011, a baseball and softball team, Umeå Baseboll & Softbol|klubb, was founded. The team has 2 former national team players as coaches and currently plays in Norra Regionserien.[26]

In 1951 the city's library was recognised as important for northern Sweden. The library is given a copy of every new book printed in Sweden.[27] Umeå University has about 37,000 students and 4,200 staff. The establishment of the university in the mid-1960s led to a population expansion from about 50,000 inhabitants to today's 121,032. The expansion continues, with about 1100 new inhabitants every year,[28] and has made Umeå a modern, somewhat intellectual city to add to the traditional basis of heavy industry for cities along the coast of northern Sweden (Norrland).

The Swedish University of Agricultural Sciences or Sveriges Lantbruksuniversitet is a university in Sweden. Although its head office is located in Uppsala (Ultuna), the university has several campuses in different parts of Sweden, including Umeå. Unlike other government-run universities in Sweden, it is funded through the budget for the Ministry of Enterprise and Innovation.

The university hospital serves the entire region of northern Sweden.

The Swedish University of Agricultural Sciences (SLU) in Umeå, with Umeå Plant Science Centre, is another major site of research and education.

Notable companies based in Umeå include:

^ The 2 indicates a kind of circumflex accent (Swedish: tvåtoppsaccent).