In Turkish, Uludağ means "great mountain". In ancient times the range of which it is a part, extending along the southern edge of Bithynia, was known as Olympos in Greek and Olympus in Latin, the western extremity being known as the Mysian Olympus and the eastern as the Bithynian Olympus,[2] and the city of Bursa was known as Prusa ad Olympum from its position near the mountain.[3] Throughout the Middle Ages, it contained hermitages and monasteries: "The rise of this monastic centre in the 8th c. and its prestige up to the 11th are linked to the resistance of numerous monks to the policy of the iconoclast emperors and then to a latent opposition to the urban, Constantinopolitan monasticism of the Studites."[4] One of the greatest monks of the Christian East, the wonder-working Byzantine monk Saint Joannicius the Great, lived as a hermit on this mountain.

Mt. Uludağ is the highest mountain of the Marmara region. Its highest peak is Kartaltepe at 2,543 m (8,343 ft). To the north are high plateaus: Sarıalan, Kirazlıyayla, Kadıyayla, and Sobra.

There is an abandoned wolfram mine near the summit. The mine and the integrated plant, which were built in 1974 for US$60 million, were closed in 1989 due to high production costs. The area is a popular center for winter sports such as skiing, and a national park of rich flora and fauna. Summer activities, such as trekking and camping, also are popular.

The highest area in western Anatolia, Uludağ is easily ascended by car or cable-car. The park is about 22 km (14 mi) south of Bursa and is signposted from there. Bursa can be reached by road from Istanbul. The cable-car ascends from Bursa and has an intermediate stop in the alpine meadows of Kadiyayla at about 1,200 m (3,937 ft) elevation. It ends at Sarialan at about 1,630 m (5,348 ft). 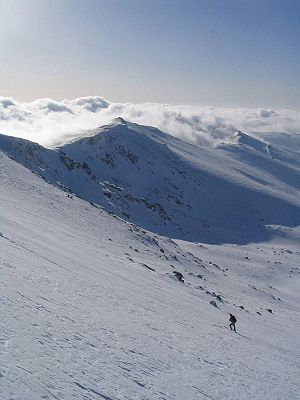 Habitats of the park range from maquis on the lower slopes, through deciduous woodland and beech and fir forest to alpine meadows at the highest levels. It is a refuge for mountain birds, such as lammergeier and other vultures, golden eagle and more than 20 other raptor species. Other high-altitude species include alpine accentor, rock thrushes and choughs. The area is also good for eastern specialities such as isabelline wheatear, and, at almost the most westerly points of their range, red-fronted serin and Krüper's nuthatch. The dense fir forest holds short-toed treecreeper, common crossbill and Tengmalm's owl, a rare and very local bird in Turkey, as well as the white-backed woodpecker. The rare and local butterfly, Parnassius apollo graslini, is found on Uludag and the area has much of interest to botanists, with colourful pink primroses (Primula vulgaris var. sibthorpii), leopard's bane (Doronicum orientale), crocuses: the purple Crocus siberi and yellow Crocus flavus, and grape hyacinths (Muscari racemosum). There are also few wolf packs roaming on the mountain.