The ultraviolet index, or UV index, is an international standard measurement of the strength of sunburn-producing ultraviolet (UV) radiation at a particular place and time. The scale was developed by Canadian scientists in 1992, and then adopted and standardized by the UN's World Health Organization and World Meteorological Organization in 1994. It is primarily used in daily forecasts aimed at the general public, and is increasingly available as an hourly forecast as well.

The purpose of the UV index is to help people effectively protect themselves from UV radiation, which has health benefits in moderation but in excess causes sunburn, skin aging, DNA damage, skin cancer, immunosuppression,[1] and eye damage, such as cataracts (see the section Human health-related effects of ultraviolet radiation). Public health organizations recommend that people protect themselves (for example, by applying sunscreen to the skin and wearing a hat and sunglasses) if they spend substantial time outdoors when the UV index is 3 or higher; see the table below for more detailed recommendations.

The UV index is a linear[clarification needed] scale, with higher values representing a greater risk of sunburn (which is correlated with other health risks) due to UV exposure. An index of 0 corresponds to zero UV radiation, as is essentially the case at night. An index of 10 corresponds roughly to midday summer sunlight with a clear sky when the UV index was originally designed; now summertime index values in the tens are common for tropical latitudes, mountainous altitudes, and areas with above-average ozone layer depletion.[2]

While the UV index can be calculated from a direct measurement of the UV spectral power at a given location, as some inexpensive portable devices are able to approximate, the value given in weather reports is usually a prediction based on a computer model. Although this may be in error (especially when cloud conditions are unexpectedly heavy or light), it is usually within ±1 UV index unit as that which would be measured.[3] 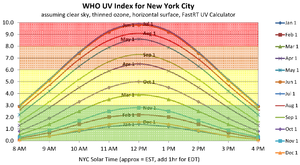 Typical variation of UV index by time of day and time of year, based on FastRT UV Calculator[4]

When the UV index is presented on a daily basis, it represents UV intensity around the sun's highest point in the day, called solar noon, halfway between sunrise and sunset. This typically occurs between 11:30 and 12:30, or between 12:30 and 13:30 in areas where daylight saving time is being observed. Predictions are made by a computer model that accounts for the effects of Sun elevation and distance, stratospheric ozone, cloud conditions, air pollutants, surface albedo, and ground altitude, all of which influence the amount of UV radiation at the surface.[2] The calculations are weighted in favor of the UV wavelengths to which human skin is most sensitive, according to the CIE-standard McKinlay–Diffey erythemal action spectrum.[5][6] The resulting UV index cannot be expressed in pure physical units, but is a good indicator of likely sunburn damage.

Because the index scale is linear (and not logarithmic, as is often the case when measuring things such as brightness or sound level), it is reasonable[vague] to assume that one hour of exposure at index 5 is approximately equivalent to a half-hour at index 10.[citation needed] 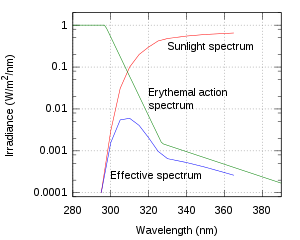 Sunburn effect (as measured by the UV index) is the product of the sunlight power spectrum (radiation intensity) and the erythemal action spectrum (skin sensitivity) across the range of UV wavelengths.[5][6]

The UV index is a number linearly related to the intensity of sunburn-producing UV radiation at a given point on the earth's surface. It cannot be simply related to the irradiance (measured in W/m2) because the UV of greatest concern occupies a spectrum of wavelength from 295 to 325 nm, and shorter wavelengths have already been absorbed a great deal when they arrive at the earth's surface. Skin damage from sunburn, however, is related to wavelength, the shorter wavelengths being much more damaging. The UV power spectrum (expressed as watts per square metre per nanometre of wavelength) is therefore multiplied by a weighting curve known as the erythemal action spectrum, and the result integrated over the whole spectrum. This gave Canadian scientists[who?] a weighted figure (sometimes called Diffey-weighted UV irradiance, or DUV, or erythemal dose rate) typically around 250 mW/m2 in midday summer sunlight. So, they arbitrarily divided by 25 mW/m2 to generate a convenient index value,[7][8] essentially a scale of 0 to 11+ (though ozone depletion is now resulting in higher values, as mentioned above).

After sporadic attempts by various meteorologists to define a "sunburn index", and amid growing concern about ozone depletion, Environment Canada scientists James B. Kerr, C. Thomas McElroy, and David I. Wardle invented the modern UV index in Toronto, Ontario. Environment Canada launched it as part of the weather forecast on May 27, 1992, making Canada the first country in the world to issue official predictions of UV levels for the next day.[9][10] Many other countries followed suit with their own UV indices, among them the United States in 1994. Initially, the methods of calculating and reporting a UV index varied significantly from country to country. A global UV index, first standardized by the World Health Organization and World Meteorological Organization in 1994,[11] gradually replaced the inconsistent regional versions, specifying not only a uniform calculation method (the Canadian definition) but also standard colors and graphics for visual media.[12] In the United States, the WHO standards officially replaced the original US standards in 2004.

In 2005, the United States[16] and Australia[17] launched the UV Alert. While the two countries have different baseline UV intensity requirements before issuing an alert, their common goal is to raise awareness of the dangers of over-exposure to the Sun on days with intense UV radiation.

In 2007, the United Nations honored UV index inventors Kerr, McElroy and Wardle with the Innovators Award for their far-reaching work on reducing public health risks from UV radiation.[18] In the same year, a survey among meteorologists ranked the development of the UV index as #11 for The Weather Channel's 100 Biggest Weather Moments.

When the day's predicted UV index is within various numerical ranges, the recommendations for protection are as follows:[12][19]

When interpreting the UV index and recommendations, be aware that: