Beginning in the end of the 18th century, several waves of both voluntary and involuntary Ukrainian settlers came to Kazakhstan. The first Ukrainians to arrive were exiled Haidamaks, members of paramilitary Ukrainian peasant and Cossack bands, who were sent by the Russian government to Kazakhstan after their failed uprising in 1768.[2] 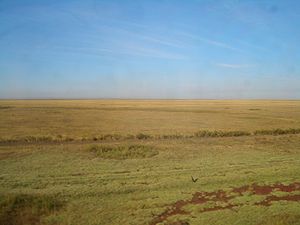 The steppes north of Astana in Akmola province, a region where many Ukrainians settled

More significant in terms of their contribution to the Ukrainian ethnic group in Kazakhstan were a large wave of settlers who beginning in the late nineteenth century arrived from almost all of the regions of Ukraine that had been part of the Russian Empire at that time. Seeking more opportunities and free land, these voluntary emigrants numbered approximately 100,000 people in Kazakhstan and adjacent regions of Russia by the turn of the century. This movement escalated significantly following the agricultural reforms of Russian Prime Minister Pyotr Stolypin in the early 20th century. Between 1897 and 1917, the proportion of the population of Kazakhstan that was of Ukrainian ethnicity increased from 1.9% to 10.5%. They tended to settle in the regions of Kazakhstan that most resembled Ukraine, in the northern part of Kazakhstan. By 1917, Ukrainians came to make up approximately 29.5% of the population of Akmola Province and 21.5% of the population of Turgai province. By 1926, according to the census, Kazakhstan was home to 860,000 Ukrainians.[2]

In the 1930s during the Soviet process of collectivization, approximately 64,000 Ukrainian kulak (relatively wealthy peasant) families were forcibly resettled in Kazakhstan.[2]

The first western Ukrainians were forcibly deported to Kazakhstan from the regions of Galicia and Volhynia when the Soviet Union annexed western Ukraine in 1939-1940. They were followed by more deportees from western Ukraine, people who were accused of or having been members of the Organization of Ukrainian Nationalists. Approximately 8,000 of the latter were sent to forced labor camps near Karaganda and many of them stayed there after having served their sentences.[2] The descendants of the post-World War II Ukrainian immigrants tend to dominate the staffing of Kazakhstan's numerous Ukrainian cultural centers.[3]

Although the Ukrainian language continues to be significant in rural areas with compact Ukrainian settlement, and is actively supported by the Kazakh government,[3] the use of the Russian language has come to dominate within Kazakhstan's Ukrainian community. Due to assimilation with Russian culture, the proportion of the Ukrainian population in Kazakhstan who declare the Ukrainian language to be their mother tongue has declined from 78.7% in 1926 to only 36.6% today.[2] Most Ukrainians in Kazakhstan, when faced with pressure from the majority Kazakhs, have tended to unite with fellow Russian Slavs.[1] There is thus somewhat of a cultural divide within Kazakhstan's Ukrainian community between those who maintain a Ukrainian political and cultural identity (largely descendants of mid 20th century immigrants) and those who have become culturally and linguistically Russified (the descendants of those who migrated to Kazakhstan earlier).[3]