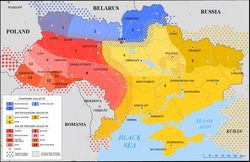 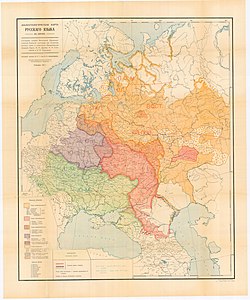 Russian "dialectological map” of 1914. Territory inhabited by speakers of the language in the Russian and Austro-Hungarian empires is shaded in green color. The language was considered as Ruthenian in Austria-Hungary and a "Little Russian" or "Malorussian dialect” by Russian authorities who prohibited its publication.

The map of South-Russian accents and dialects (1871). In the 19th century some Russian scholars denoted Ukrainian language as "South-Russian".[1]

Ukrainian is also spoken by a large émigré population, particularly in Canada, The United States, Brazil, Argentina, and Australia. The founders of this population primarily emigrated from Galicia, which used to be part of Austro-Hungary before World War I, and belonged to Poland between the World Wars. The language spoken by most of them is based on the Galician dialect of Ukrainian from the first half of the twentieth century. Compared with modern Ukrainian, the vocabulary of Ukrainians outside Ukraine reflects less influence of Russian, yet may contain Polish or German loanwords. It often contains many loanwords from the local language as well (e.g. снікерси sneekersy, for "sneakers" in the United States[16]).

Disputed status of some dialects

Balachka is spoken in the Kuban region of Russia, by the Kuban Cossacks. The Kuban Cossacks being descendants of the Zaporozhian Cossacks are beginning to consider themselves as a separate ethnic identity. Their dialect is based on Middle Dnieprian with the Ukrainian grammar. It includes dialectical words of central Ukrainian with frequent inclusion of Russian vocabulary, in particular for modern concepts and items. It varies somewhat from one area to another.[7]

The Rusyn language is considered to be a dialect of Ukrainian by Ukrainian linguists:

Rusyn is considered by some Rusyn linguists and Rusyns to be a separate language: