The Ukrainian Galician Army obtained its arms from Austrian depots and from the demobilized Austrian and German troops who streamed through Galicia by the hundreds of thousands following the collapse of the Central Powers at the end of World War I. However, the centers of Austria's military industry lay far from Galicia, and subsequent difficulty with resupply was a major factor in the Galicians losing their war against Poland.

Nieuport 17 of the Ukrainian Galician Army 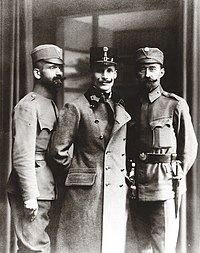 The government of the West Ukrainian People's Republic was well organized and was able to mobilize over 100,000 people by spring 1919, 40,000 of whom were battle-ready. Due to the Ukrainians' generally poor socioeconomic status, the army had a disproportionately low ratio of officers to other ranks. In the Austro-Hungarian Army, ethnic Ukrainians had accounted for only two out of 1,000 officers (in comparison, Poles had made up 27/1,000 officers in the Austrian military). As a result, although most of the junior rank officers were Galicians the government of the West Ukrainian People's Republic relied largely on former high-ranking officers of the defunct Russian Army, such as General Mykhailo Omelianovych-Pavlenko, to take on the post of commander and general staff. It also staffed many positions with unemployed Austrian and German officers. For this reason, the German language was the easiest way for officers to communicate with each other and was the dominant language among the staff.[1] Despite these measures, only approximately 2.4% of the army consisted of officers.

The Ukrainian Galician Army reached its greatest strength in June 1919, where it had 70,000 to 75,000 men, including reserves. It had very limited cavalry but artillery, consisting of ex-Austrian pieces, was a strong point. The UHA had 2-3 armored cars and two armored trains. The UHA's air force, organized by Petro Franko (son of the poet Ivan Franko), fielded 40 airplanes, and until April 1919 enjoyed air superiority over the Polish forces.

A former unit of the Austro-Hungarian Army, the 1st Brigade of Sich Riflemen (Січові Стрільці) became the elite force of the Ukrainian Galician Army during the war against Poland. It was formed in 1914 by former members of youth and paramilitary organizations and fought in Galicia and Ukraine against the Russian Empire throughout the first world war. At its peak this brigade had 8,600 men, not all of whom fought in Galicia.

The Ukrainian Galician Army fielded a Jewish battalion (Zhydivs’kyy Kurin’ UHA) recruited from Jewish university and high school students in Ternopil and led by Lieutenant Solomon Leimberg.[2] Formed in June, 1919, it attained a strength of 1,200 men and participated in combat against Polish forces in July 1919 and subsequently against the Bolsheviks. The battalion was decimated by a typhus epidemic in late 1919 and its surviving soldiers were subsequently reassigned to other units within the Ukrainian Galician Army.[3]

The Army consisted of numerous military formations which later were organized into four Corps. The Corps were farther divided into brigades composed of several regular military units.

Territorially the West Ukrainian People's Republic was divided into three Military Oblasts centered in Lviv, Tarnopil, and Stanyslaviv with four okrugas (districts) in each.