Advertisement - You can get this game from STEAM
Town in Yaroslavl Oblast, Russia

A local tradition dates the town's origins to 937.[citation needed] It was first documented in 1148 as Ugliche Pole (Corner Field). The town's name is thought to allude to the nearby turn in the Volga River, and is derived from the Russian word ugol (a corner, a nook).[11]

From 1218 until 1328, Uglich was the seat of a small princedom. At that time, the local princes sold their rights to the great prince of Moscow. Uglich was a border town of the Grand Duchy of Moscow, and it was burned several times in conflicts by Lithuanians, Tatars, and the grand prince of Tver.

Grand Duke Ivan III of Moscow gave the town in 1462 to his younger brother Andrey Bolshoy (Andrey the Great). During Andrey's reign, the town was expanded and the first stone buildings were constructed. Particularly notable were the cathedral (rebuilt in 1713), the Intercession Monastery (destroyed by the Bolsheviks in the early 20th century Revolution), and the red-brick palace of the prince (completed in 1481 and still standing).

Reign of Ivan the Terrible

During the reign of Ivan the Terrible, the town passed to his only brother, Yury. Local inhabitants helped the Tsar capture the city of Kazan by building a wooden fortress that was transported via the Volga all the way to Kazan. Throughout the 16th century, Uglich prospered both politically and economically, but thereafter its fortunes began to decline.

After Ivan's death, his youngest son Dmitry Ivanovich was banished to Uglich in 1584. The most well-known event in the town's history took place on May 15, 1591 when the 10-year-old boy was found dead with his throat cut in the palace courtyard. Suspicion immediately fell on the tsar's chief advisor, Boris Godunov. Official investigators concluded, however, that Dimitriy's death was an accident. They cut a "tongue" from the cathedral bell that rang the news of Dimitriy's death and "exiled" it to Siberia.

The Romanov Tsars quickly arranged to canonize the martyred Tsesarevich and to designate Uglich as a place of pilgrimage. On the spot where Dimitry was thought to have been murdered, the city in 1690 built a small Church of St. Demetrios on the Blood. Its red walls and blue domes are visible as travelers go north on the Volga. The palace where the prince lived was turned into a museum. The image of Tsesarevich with a knife in his hand was adopted as the town's coat of arms.

In the first third of the 18th century, the kremlin cathedral and its remarkable bell tower were demolished and rebuilt. Other 18th-century landmarks include the Smolenskaya, Korsunskaya, Kazanskaya and Bogoyavlenskaya churches. The most important edifice of the 19th century is the cathedral of the Theophany Convent, consecrated in 1853.

Infrastructure improvements included a railway station, connecting residents to transportation via other routes than the river. A watch manufacturing plant operated in the 20th-century town, making Chaika watches; this has since closed. A hydroelectric power station was built under Stalin's reign to generate power from the Volga. But development of the dam and Uglich Reservoir resulted in severe flooding of the town's outskirts. In November 2008 the Nexans cable mill opened. 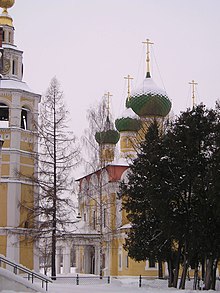 The Transfiguration Cathedral in the Uglich kremlin in 2003

Apart from the kremlin, the city center features other examples of historic Russian architecture. Particularly notable are the Alexeievsky and Resurrection monasteries. The Assumption three-tented church (1628) of the Alexeyevsky Monastery is considered a gem of Russian medieval architecture. The common people said this church was "Marvelous", and that qualifier became part of its official name. Located nearby is the more conventional Church of St. John the Baptist (1681).

Closer to the bank of the Volga is the Resurrection Monastery with a huge cathedral, refectory, belfry, and summer church. All these buildings stand in a row and date to 1674-77. Opposite the monastery is the graceful Church of the Nativity of St. John the Baptist. It was built in 1689-90 by a local merchant to commemorate the spot where his son had drowned.

More historic architecture may be seen in the vicinity of Uglich, including the 17th-century Uleima Monastery and a fine church in Divnogorye.