The gallon is a unit of measurement for volume and fluid capacity in both the US customary units and the British imperial systems of measurement. Three significantly different sizes are in current use:

The IEEE standard symbol for both US (liquid) and imperial gallon is gal.[1]

The gallon currently has one definition in the imperial system, and two definitions (liquid and dry) in the US customary system. Historically, there were many definitions and redefinitions.

There were a number of systems of liquid measurements in the United Kingdom prior to the 19th century.[2] 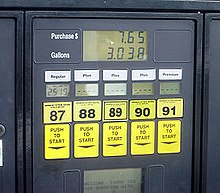 The US liquid gallon (frequently called simply "gallon") is legally defined as 231 cubic inches, which is exactly 3.785411784 litres.[6][7] A US liquid gallon of water weighs about 8.34 pounds or 3.78 kilograms at 62 °F (17 °C), making it about 16.6% lighter than the imperial gallon. There are four quarts in a gallon, two pints in a quart and 16 US fluid ounces in a US pint, which makes the US fluid ounce equal to 1/128 of a US gallon. In order to overcome the effects of expansion and contraction with temperature when using a gallon to specify a quantity of material for purposes of trade, it is common to define the temperature at which the material will occupy the specified volume. For example, the volume of petroleum products[8] and alcoholic beverages[9] are both referenced to 60 °F (15.6 °C) in government regulations.

Gallons used in fuel economy expression in Canada and the United Kingdom are imperial gallons.[12][13]

The gallon was removed from the list of legally defined primary units of measure catalogued in the EU directive 80/181/EEC for trading and official purposes, with effect from 31 December 1994. Under the directive the gallon could still be used, but only as a supplementary or secondary unit.[19] One of the effects of this directive was that the United Kingdom amended its own legislation to replace the gallon with the litre as a primary unit of measure in trade and in the conduct of public business, effective from 30 September 1995.[20][21][22] However within the United Kingdom and Ireland, barrels and large containers of beer, oil and other liquids still tend to be in multiples of the imperial gallon.

Ireland also passed legislation in response to the EU directive, with the effective date being 31 December 1993.[23] Though the gallon has ceased to be the legally defined primary unit, it can still be legally used in both the UK and Ireland as a supplementary unit.

The United Arab Emirates started selling gasoline by the litre in 2010,[24] while Guyana[25] and Panama switched in 2013.[26] The UAE and Guyana, former British colonies, had used the imperial gallon and Panama the US gallon before this time.[27]

Myanmar (Burma) switched from imperial gallon to litre sales before 2014.[28]

Antigua and Barbuda planned to switch over to using litres by 2015,[29] but due to various issues, the switch-over was only effected in 2019.

Other than the United States, the US gallon is still used in Belize, Colombia, The Dominican Republic, Ecuador, El Salvador, Guatemala, Haiti, Honduras, Liberia, Nicaragua, and Peru, but only for the sale of gasoline; all other products in these countries are sold in litres, or multiples and submultiples of a litre.[27]

Relationship to other units

Historically, a common bottle size for liquor in the US was the "fifth", i.e. one-fifth of a US gallon (or one-sixth of an imperial gallon). While spirit sales in the US were switched to metric measures in 1976, a 750 mL bottle is still sometimes known as a "fifth".[41][42]

The term derives most immediately from galun, galon in Old Northern French, but the usage was common in several languages, for example jale in Old French and gęllet (bowl) in Old English. This suggests a common origin in Romance Latin, but the ultimate source of the word is unknown.[43]

The gallon originated as the base of systems for measuring wine and beer in England. The sizes of gallon used in these two systems were different from each other: the first was based on the wine gallon (equal in size to the US gallon), and the second one either the ale gallon or the larger imperial gallon.

By the end of the 18th century, there were three definitions of the gallon in common use:

The wine, fluid, or liquid gallon has been the standard US gallon since the early 19th century. The wine gallon, which some sources relate to the volume occupied by eight medieval merchant pounds of wine, was at one time defined as the volume of a cylinder 6 inches deep and 7 inches in diameter, i.e. 6 in × (3+1/2 in)2 × π ≈ 230.907 06 cubic inches. It was redefined during the reign of Queen Anne in 1706 as 231 cubic inches exactly, the result of the earlier definition with π approximated to 22/7. Although the wine gallon had been used for centuries for import duty purposes, there was no legal standard of it in the Exchequer, and a smaller gallon (224 cu in) was actually in use, meaning this statute became necessary; it remains the US definition today.

In 1824, Britain adopted a close approximation to the ale gallon known as the imperial gallon, and abolished all other gallons in favour of it. Inspired by the kilogram-litre relationship, the imperial gallon was based on the volume of 10 pounds of distilled water weighed in air with brass weights with the barometer standing at 30 inches of mercury and at a temperature of 62 °F.

Historically, gallons of various sizes were used in many parts of Western Europe. In these localities, it has been replaced as the unit of capacity by the litre.