Cabinet of the United States

The United States Constitution does not explicitly establish a Cabinet. The Cabinet's role, inferred from the language of the Opinion Clause (Article II, Section 2, Clause 1) of the Constitution, is to serve as an advisory body to the president of the United States. Additionally, the Twenty-fifth Amendment authorizes the vice president, together with a majority of certain members of the Cabinet, to declare the president "unable to discharge the powers and duties of his office".

Members of the Cabinet (except for the vice president) are appointed by the president, subject to confirmation by the Senate; once confirmed, they serve at the pleasure of the president, who can dismiss them at any time without the approval of the Senate, as affirmed by the Supreme Court in Myers v. United States (1926). All federal public officials, including Cabinet members, are also subject to impeachment by the House of Representatives and trial in the Senate for "treason, bribery, or other high crimes and misdemeanors" (Article II, Section 4).

The president can also unilaterally designate senior advisers from the Executive Office of the President and heads of other federal agencies as members of the Cabinet, although this is a symbolic status marker and does not, apart from attending Cabinet meetings, confer any additional powers. 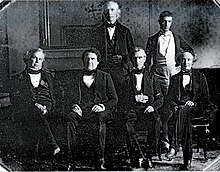 James K. Polk and his Cabinet in 1845: the first Cabinet to be photographed. 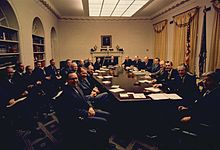 A map showing the historical makeup of the Cabinet of the United States by year.

The tradition of the Cabinet arose out of the debates at the 1787 Constitutional Convention regarding whether the president would exercise executive authority solely or collaboratively with a cabinet of ministers or a privy council. As a result of the debates, the Constitution (Article II, Section 1, Clause 1) vests "all executive power" in the president singly, and authorizes—but does not compel—the president (Article II, Section 2, Clause 1) to "require the Opinion, in writing, of the principal Officer in each of the executive Departments, upon any Subject relating to the Duties of their respective Offices".[1][2] The Constitution does not specify what the executive departments will be, how many there will be, or what their duties will be.

George Washington, the first U.S. president, organized his principal officers into a Cabinet, and it has been part of the executive branch structure ever since. Washington's Cabinet consisted of five members: himself, Secretary of State Thomas Jefferson, Secretary of the Treasury Alexander Hamilton, Secretary of War Henry Knox and Attorney General Edmund Randolph. Vice President John Adams was not included in Washington's Cabinet because the position was initially regarded as a legislative officer (president of the Senate).[3] It was not until the 20th century that vice presidents were regularly included as members of the Cabinet and came to be regarded primarily as a member of the executive branch.

Presidents have used Cabinet meetings of selected principal officers but to widely differing extents and for different purposes. Secretary of State William H. Seward and then-professor Woodrow Wilson advocated the use of a parliamentary-style Cabinet government. But President Abraham Lincoln rebuffed Seward, and Woodrow Wilson would have none of it in his administration. In recent administrations, Cabinets have grown to include key White House staff in addition to department and various agency heads. President Ronald Reagan formed seven sub-cabinet councils to review many policy issues, and subsequent presidents have followed that practice.[2]

In 3 U.S.C. § 302 with regard to delegation of authority by the president, it is provided that "nothing herein shall be deemed to require express authorization in any case in which such an official would be presumed in law to have acted by authority or direction of the President." This pertains directly to the heads of the executive departments as each of their offices is created and specified by statutory law (hence the presumption) and thus gives them the authority to act for the president within their areas of responsibility without any specific delegation.

Under the 1967 Federal Anti-Nepotism statute, federal officials are prohibited from appointing their immediate family members to certain governmental positions, including those in the Cabinet.[4]

The heads of the executive departments and all other federal agency heads are nominated by the president and then presented to the Senate for confirmation or rejection by a simple majority (although before the use of the "nuclear option" during the 113th US Congress, they could have been blocked by filibuster, requiring cloture to be invoked by ​3⁄5 supermajority to further consideration). If approved, they receive their commission scroll, are sworn in and then begin their duties.

An elected vice president does not require Senate confirmation, nor does the White House chief of staff, which is an appointed staff position of the Executive Office of the President.

The annual salary of the vice president is $235,300.[6] The salary level was set by the Government Salary Reform Act of 1989, which provides an automatic cost of living adjustment for federal employees. The vice president receives the same pension as other members of Congress based on their ex officio position as the president of the Senate.[7]

The individuals listed below were nominated by President Donald Trump to form his Cabinet and were confirmed by the United States Senate on the date noted, or are serving as acting department heads by his request pending the confirmation of his nominees. For a full list of people nominated for Cabinet positions, see Formation of Donald Trump's Cabinet.

Vice president and the heads of the executive departments

The Cabinet includes the vice president and the heads of 15 executive departments, listed here according to their order of succession to the presidency. These 15 positions are the core "cabinet member" seats, as distinct from other Cabinet-level seats for other various top level White House staffers and heads of other government agencies, none of whom are in the presidential line of succession and not all of whom are officers of the United States.[8] Note that the speaker of the House and the president pro tempore of the Senate follow the vice president and precede the secretary of state in the order of succession, but both are in the legislative branch and are not part of the Cabinet.

The following officials hold positions that are considered to be Cabinet-level positions:

Renamed heads of the executive departments

Other positions no longer of Cabinet rank