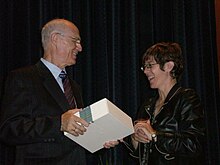 Tzvi Avni was born in Saarbrücken, Germany, and emigrated to Mandate Palestine as a child. He studied with Paul Ben-Haim.

On the recommendation of Edgard Varèse, he became involved with the Columbia-Princeton Electronic Music Center in the 1960s. Later he founded an electronic studio at the Jerusalem Academy of Music, following the guidelines of his mentor in New York, Vladimir Ussachevsky.[1]