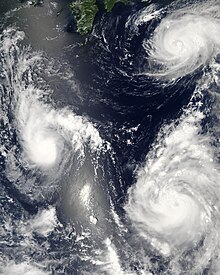 Three different tropical cyclones active over the Western Pacific Ocean on August 7, 2006 (Maria, Bopha, and Saomai.). The cyclones on the lower and upper right are typhoons.

A typhoon is a mature tropical cyclone that develops between 180° and 100°E in the Northern Hemisphere. This region is referred to as the Northwestern Pacific Basin,[1] and is the most active tropical cyclone basin on Earth, accounting for almost one-third of the world's annual tropical cyclones. For organizational purposes, the northern Pacific Ocean is divided into three regions: the eastern (North America to 140°W), central (140°W to 180°), and western (180° to 100°E). The Regional Specialized Meteorological Center (RSMC) for tropical cyclone forecasts is in Japan, with other tropical cyclone warning centers for the northwest Pacific in Hawaii (the Joint Typhoon Warning Center), the Philippines and Hong Kong. While the RSMC names each system, the main name list itself is coordinated among 18 countries that have territories threatened by typhoons each year.[2]

Within the northwestern Pacific, there are no official typhoon seasons as tropical cyclones form throughout the year. Like any tropical cyclone, there are few main requirements for typhoon formation and development: (1) sufficiently warm sea surface temperatures, (2) atmospheric instability, (3) high humidity in the lower to middle levels of the troposphere, (4) enough Coriolis effect to develop a low pressure center, (5) a pre-existing low level focus or disturbance, and (6) a low vertical wind shear. While the majority of storms form between June and November, a few storms do occur between December and May (although tropical cyclone formation is at a minimum during that time). On average, the northwestern Pacific features the most numerous and intense tropical cyclones globally. Like other basins, they are steered by the subtropical ridge towards the west or northwest, with some systems recurving near and east of Japan. The Philippines receive the brunt of the landfalls, with China and Japan being impacted slightly less. Some of the deadliest typhoons in history have struck China. Southern China has the longest record of typhoon impacts for the region, with a thousand-year sample via documents within their archives. Taiwan has received the wettest known typhoon on record for the northwest Pacific tropical cyclone basins.

Panoramic cityscape skyline of Taipei, Taiwan during a typhoon in July 2015

The French typhon is attested with the meaning of whirlwind or storm since 1504.[6] The Oxford English Dictionary[7] cites Hindustani ṭūfān and Chinese tai fung giving rise to several early forms in English. The earliest forms in English—"touffon", later "tufan", "tuffon", and others—derive from Hindustani ṭūfān, with citations as early as 1588. From 1699 appears "tuffoon", later "tiffoon", derived from Chinese with spelling influenced by the older Hindustani-derived forms. The modern spelling "typhoon" dates to 1820, preceded by "tay-fun" in 1771 and "ty-foong", all derived from the Chinese tai fung.

The Ancient Greek Τυφῶν (Typhôn, "Typhon") is related and has secondarily contaminated the word.[8] The Persian term may originally have been influenced by the Greek word.[7][9]

Since 2009 the Hong Kong Observatory has divided typhoons into three different classifications: typhoon, severe typhoon and super typhoon.[11] A typhoon has wind speed of 64–79 knots (73–91 mph; 118–149 km/h), a severe typhoon has winds of at least 80 knots (92 mph; 150 km/h), and a super typhoon has winds of at least 100 knots (120 mph; 190 km/h).[11] The United States' Joint Typhoon Warning Center (JTWC) unofficially classifies typhoons with wind speeds of at least 130 knots (67 m/s; 150 mph; 241 km/h)—the equivalent of a strong Category 4 storm in the Saffir-Simpson scale—as super typhoons.[12] However, the maximum sustained wind speed measurements that the JTWC uses are based on a 1-minute averaging period, akin to the U.S.' National Hurricane Center and Central Pacific Hurricane Center. As a result, the JTWC's wind reports are higher than JMA's measurements, as the latter is based on a 10-minute averaging interval.[13]

There are six main requirements for tropical cyclogenesis: sufficiently warm sea surface temperatures, atmospheric instability, high humidity in the lower to middle levels of the troposphere, enough Coriolis force to develop a low pressure center, a pre-existing low level focus or disturbance, and low vertical wind shear. While these conditions are necessary for tropical cyclone formation, they do not guarantee that a tropical cyclone will form. Normally, an ocean temperature of 26.5 °C (79.7 °F) spanning through a depth of at least 50 metres (160 ft) is considered the minimum to maintain the special mesocyclone that is the tropical cyclone.[citation needed] These warm waters are needed to maintain the warm core that fuels tropical systems. A minimum distance of 500 km (300 mi) from the equator is normally needed for tropical cyclogenesis.[14] Whether it be a depression in the Intertropical Convergence Zone (ITCZ) or monsoon trough, a broad surface front, or an outflow boundary, a low level feature with sufficient vorticity and convergence is required to begin tropical cyclogenesis. About 85 to 90 percent of Pacific typhoons form within the monsoon trough.[15] Even with perfect upper-level conditions and the required atmospheric instability, the lack of a surface focus will prevent the development of organized convection and a surface low. Vertical wind shear of less than 10 m/s (20 kn, 33 ft/s) between the ocean surface and the tropopause is required for tropical cyclone development.[14] Typically with Pacific typhoons, there are two outflow jets: one to the north ahead of an upper trough in the Westerlies, and a second towards the equator.[15]

In general, westerly wind increases associated with the Madden–Julian oscillation lead to increased tropical cyclogenesis in all tropical cyclone basins. As the oscillation propagates from west to east, it leads to an eastward march in tropical cyclogenesis with time during that hemisphere's summer season.[16] On average, twice per year twin tropical cyclones will form in the western Pacific Ocean, near the 5th parallel north and the 5th parallel south, along the same meridian, or line of longitude.[17] There is an inverse relationship between tropical cyclone activity in the western Pacific basin and the north Atlantic basin, however. When one basin is active, the other is normally quiet, and vice versa. The main reason for this appears to be the phase of the Madden–Julian oscillation, or MJO, which is normally in opposite modes between the two basins at any given time.[18]

Nearly one-third of the world's tropical cyclones form within the western Pacific. This makes this basin the most active on Earth.[20] Pacific typhoons have formed year round, with peak months from August to October. The peak months correspond to that of the Atlantic hurricane seasons. Along with a high storm frequency, this basin also features the most globally intense storms on record. One of the most recent busy seasons was 2013. Tropical cyclones form in any month of the year across the northwest Pacific Ocean, and concentrate around June and November in the northern Indian Ocean. The area just northeast of the Philippines is the most active place on Earth for tropical cyclones to exist.

Across the Philippines themselves, activity reaches a minimum in February, before increasing steadily through June, and spiking from July through October, with September being the most active month for tropical cyclones across the archipelago. Activity falls off significantly in November, although Typhoon Haiyan, the strongest Philippine typhoon on record, was a November typhoon.[21] The most frequently impacted areas of the Philippines by tropical cyclones are northern and central Luzon and eastern Visayas.[22] A ten-year average of satellite determined precipitation showed that at least 30 percent of the annual rainfall in the northern Philippines could be traced to tropical cyclones, while the southern islands receive less than 10 percent of their annual rainfall from tropical cyclones.[23] The genesis and intensity of typhoons are also modulated by slow variation of the sea surface temperature and circulation features following a near-10-year frequency.[24] 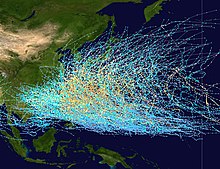 Tracks of all tropical cyclones in the northernwestern Pacific Ocean between 1980 and 2005. The vertical line to the right is the International Date Line.

A rare few storms, like Hurricane John, were redesignated as typhoons as they originated in the Eastern/Central Pacific and moved into the western Pacific.

Within the Western Pacific, RSMC Tokyo-Typhoon Center, part of the Japan Meteorological Agency has had the official warning responsibility for the whole of the Western Pacific since 1989,[29] and the naming responsibility for systems of tropical storm strength or greater since 2000.[11] However each National Meteorological and Hydrological Service within the western Pacific has the responsibility for issuing warnings for land areas about tropical cyclones affecting their country, such as the Joint Typhoon Warning Center for United States agencies,[30] the Philippine Atmospheric, Geophysical and Astronomical Services Administration (PAGASA) for interests in the island archipelago nation,[31] and the Hong Kong Observatory for storms that come close enough to cause the issuance of warning signals.[32]

The list of names consists of entries from 17 Southeast and East Asian nations and the United States who have territories directly affected by typhoons. The submitted names are arranged into a list, the names on the list will be used from up to down, from left to right. When all names on the list are used, it will start again from the left-top corner. When a typhoon causes damage in a country, the affected country can request for retiring the name in the next session of the ESCAP/WMO Typhoon Committee. A new name will be decided by the country whose name was retired. Unlike tropical cyclones in other parts of the world, typhoons are not named after people. Instead, they generally refer to animals, flowers, astrological signs, and a few personal names. However, Philippines(PAGASA) retains its own naming list, which does consist of human names.[33] Storms that cross the date line from the central Pacific retain their original name, but the designation of hurricane becomes typhoon. In Japan, people use the numerical designation of typhoons according to the sequence of their occurrence in the calendar year.[29]

The most active Western Pacific typhoon season was in 1964,[citation needed] when 39 storms of tropical storm strength formed. Only 15 seasons had 30 or more storms developing since reliable records began. The least activity seen in the northwest Pacific Ocean was during the 2010 Pacific typhoon season, when only 14 tropical storms and seven typhoons formed. In the Philippines, the most active season, since 1945, for tropical cyclone strikes was 1993 when nineteen tropical cyclones moved through the country.[36] There was only one tropical cyclone that moved through the Philippines in 1958.[37] The 2004 Pacific typhoon season was the busiest for Okinawa since 1957.[38] Within Guangdong in southern China, during the past thousand years, the most active decades for typhoon strikes were the 1660s and 1670s.[39]

The highest reliably-estimated maximum sustained winds on record for a typhoon were those of Typhoon Haiyan at 314 km/h (195 mph) shortly before its landfall in the central Philippines on November 8, 2013.[40] The most intense storm based on minimum pressure was Typhoon Tip in the northwestern Pacific Ocean in 1979, which reached a minimum pressure of 870 hectopascals (26 inHg) and maximum sustained wind speeds of 165 knots (85 m/s, 190 mph, 310 km/h).[41] The deadliest typhoon of the 20th century was Typhoon Nina, which killed nearly 100,000 in China in 1975 due to a flood that caused 12 reservoirs to fail.[42] After Typhoon Morakot landed in Taiwan at midnight on August 8, 2009, almost the entire southern region of Taiwan (Chiayi County/Chiayi City, Tainan County/Tainan City (now merged as Tainan), Kaohsiung County/Kaohsiung City (now merged as Kaohsiung), and Pingtung County) and parts of Taitung County and Nantou County were flooded by record-breaking heavy rain. The rainfall in Pingtung County reached 2,327 millimeters (91.6 in),[43] breaking all rainfall records of any single place in Taiwan induced by a single typhoon,[44] and making the cyclone the wettest known typhoon.