Enlarge Twenty20 International Indian Premier League
Form of limited overs cricket, 20-over format
This article is about the professional version of the sport of cricket. For amateur twenty over cricket, see short form cricket. For the Malayalam film, see Twenty:20 (film). For other uses, see 2020 (disambiguation).

Twenty20 cricket or Twenty-20 (often abbreviated to T20), is a shortened format of cricket. At the professional level, it was originally introduced by the England and Wales Cricket Board (ECB) in 2003 for the inter-county competition.[1] In a Twenty20 game, the two teams have a single innings each, which is restricted to a maximum of 20 overs. Together with first-class and List A cricket, Twenty20 is one of the three current forms of cricket recognised by the International Cricket Council (ICC) as being at the highest international or domestic level.

A typical Twenty20 game is completed in about three hours, with each innings lasting around 90 minutes and an official 10-minute break between the innings. This is much shorter than previous forms of the game, and is closer to the timespan of other popular team sports. It was introduced to create a fast-paced game that would be attractive to spectators at the ground and viewers on television.

The game has succeeded in spreading around the cricket world. On most international tours there is at least one Twenty20 match and all Test-playing nations have a domestic cup competition. West Indies are the reigning world champions, winning the 2016 competition. 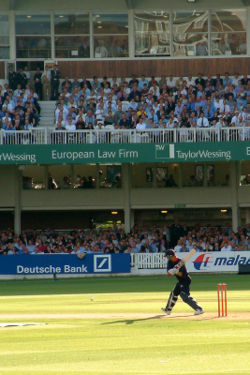 When the Benson & Hedges Cup ended in 2002, the ECB needed another one day competition to fill its place. Cricketing authorities were looking to boost the game's popularity with the younger generation in response to dwindling crowds and reduced sponsorship. It was intended to deliver fast-paced, exciting cricket accessible to thousands of fans who were put off by the longer versions of the game. Stuart Robinson, the marketing manager of the ECB, proposed a 20 over per innings game to county chairmen in 2001 and they voted 11–7 in favour of adopting the new format.[2]

The first official Twenty20 matches were played on 13 June 2003 between the English counties in the Twenty20 Cup.[3] The first season of Twenty20 in England was a relative success, with the Surrey Lions defeating the Warwickshire Bears by 9 wickets in the final to claim the title.[4] The first Twenty20 match held at Lord's, on 15 July 2004 between Middlesex and Surrey, attracted a crowd of 27,509, the highest attendance for any county cricket game at the ground – other than a one-day final – since 1953.[5]

Thirteen teams from different parts of the country participated in Pakistan's inaugural competition in 2004, with Faisalabad Wolves the first winners. On 12 January 2005 Australia's first Twenty20 game was played at the WACA Ground between the Western Warriors and the Victorian Bushrangers. It drew a sell-out crowd of 20,000, which was the first one in nearly 25 years.[6]

Starting on 11 July 2006, 19 West Indies regional teams competed in what was named the Stanford 20/20 tournament. The event was financially backed by billionaire Allen Stanford, who gave at least US$28,000,000 in funding money. It was intended that the tournament would be an annual event. Guyana won the inaugural event, defeating Trinidad and Tobago by 5 wickets, securing US$1,000,000 in prize money.[7][8]

On 5 January 2007 Queensland Bulls played the New South Wales Blues at The Gabba, Brisbane. An unexpected 16,000 fans turned up on the day to buy tickets, causing Gabba staff to throw open gates and grant many fans free entry. Attendance reached 27,653.[9] For the February 2008 Twenty20 match between Australia and India, 85,824[10] people attended the match at the Melbourne Cricket Ground, involving the Twenty20 World Champions against the ODI World Champions.

Crowd during a match of the 2015 IPL season in Hyderabad, India.

Several T20 leagues started after the popularity of the 2007 ICC World Twenty20.[15] The Board of Control for Cricket in India started the Indian Premier League, which is now the largest cricket league, in 2008, which utilizes the North American sports franchise system with eight teams in major Indian cities. In September 2017, the broadcasting and digital rights for the next five years (2018-2022) of the IPL were sold to Star India for US$2.55 billion,[16] making it one of the world's most lucrative sports league per match. The IPL has seen a spike in its brand valuation to US$5.3 billion after the 10th edition, according to global valuation and corporate finance advisor Duff & Phelps.[17]

Several T20 leagues[20][21] follow the general format of having a group stage followed by a Page playoff system among the top four teams where:

In the Big Bash League, there is an additional match to determine which of the fourth or fifth-placed teams will qualify to be in the top four.[22]

The first Twenty20 International match was held on 5 August 2004 between England and New Zealand women's teams with New Zealand winning by nine runs.[23]

On 17 February 2005 Australia defeated New Zealand in the first men's international Twenty20 match, played at Eden Park in Auckland. The game was played in a light-hearted manner – both sides turned out in kit similar to that worn in the 1980s, the New Zealand team's a direct copy of that worn by the Beige Brigade. Some of the players also sported moustaches/beards and hairstyles popular in the 1980s taking part in a competition amongst themselves for best retro look, at the request of the Beige Brigade. Australia won the game comprehensively, and as the result became obvious towards the end of the NZ innings, the players and umpires took things less seriously – Glenn McGrath jokingly replayed the Trevor Chappell underarm incident from a 1981 ODI between the two sides, and Billy Bowden showed him a mock red card (red cards are not normally used in cricket) in response.

The first Twenty20 international in England was played between England and Australia at the Rose Bowl in Hampshire on 13 June 2005, which England won by a margin of 100 runs, a record victory which lasted until 2007.[24]

On 9 January 2006 Australia and South Africa met in the first international Twenty20 game in Australia. In a first, each player's nickname appeared on the back of his uniform, rather than his surname. The international match drew a crowd of 38,894 people at The Gabba.

On 16 February 2006 New Zealand defeated West Indies in a tie-breaking bowl-out 3–0; 126 runs were scored apiece in the game proper. The game was the last international match played by Chris Cairns.

Impact on the game 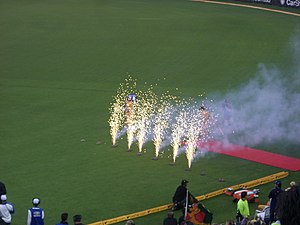 Twenty20 cricket is claimed to have resulted in a more athletic and explosive form of cricket. Indian fitness coach Ramji Srinivasan declared in an interview with the Indian fitness website Takath.com, that Twenty20 had "raised the bar" in terms of fitness levels for all players, demanding higher levels of strength, speed, agility and reaction time from all players regardless of role in the team.[26] Matthew Hayden credited retirement from international cricket with aiding his performance in general and fitness in particular in the Indian Premier League.[27]

In June 2009, speaking at the annual Cowdrey Lecture at Lord's, former Australian wicketkeeper Adam Gilchrist pushed for Twenty20 to be made an Olympic sport. "It would," he said, "be difficult to see a better, quicker or cheaper way of spreading the game throughout the world."[28]

Former Australian captain Ricky Ponting, on the other hand, has criticized Twenty20 as being detrimental to Test cricket and for hampering batsmen's scoring skills and concentration.[29] Former Australian captain Greg Chappell made similar complaints, fearing that young players would play too much T20 and not develop their batting skills fully, while former England player Alex Tudor feared the same for bowling skills.[30][31]

Former West Indies captains Clive Lloyd, Michael Holding and Garfield Sobers criticised Twenty20 for its role in discouraging players from representing their test cricket national side, with many West Indies players like Chris Gayle, Sunil Narine and Dwayne Bravo preferring instead to play in a Twenty20 franchise elsewhere in the world and make far more money.[32][33][34][35][36]

Under-17s and Under-19s are playing T20 games in national championships, and at the detriment of two-day games. Good state players these days are averaging 35; if you were averaging 35 when I was playing your dad would go and buy you a basketball or a footy and tell you to play that.

Twenty20 match format is a form of limited overs cricket in that it involves two teams, each with a single innings, the key feature is that each team bats for a maximum of 20 overs. In terms of visual format, the batting team members do not arrive from and depart to traditional dressing rooms, but come and go from a bench (typically a row of chairs) visible in the playing arena, analogous to association football's technical area or a baseball dugout.[38] 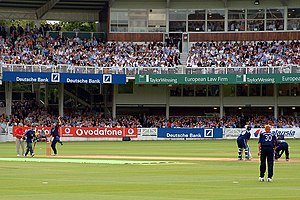 Middlesex playing against Surrey at Lord's, in front of a 28,000-strong crowd

The Laws of cricket apply to Twenty20, with major exceptions:[39]

Currently, if the match ends with the scores tied and there must be a winner, the tie is broken with a one over per side Eliminator[40] or Super Over:[41][42] Each team nominates three batsmen and one bowler to play a one-over per side "mini-match". The team which bats second in the match bats first in the Super Over.[43][44] In turn, each side bats one over bowled by the one nominated opposition bowler, with their innings over if they lose two wickets before the over is completed. The side with the higher score from their Super Over wins. If the super over also ends up in a tie, the team that has scored the most boundaries (4s+6s) in the 20 overs wins.

In the Australian domestic competition the Big Bash League the Super Over is played slightly differently, with no 2-wicket limit, and if the super over is also tied then a "countback" is used, with scores after the fifth ball for each team being used to determine the result. If it is still tied, then the countback goes to 4 balls and so on.[45] The latest Super Over to decide a match was between the Sydney Sixers winning against the Brisbane Heat on 25 January 2017, in the Big Bash League at the Brisbane Cricket Ground, with the Sixers winning 0/22 to 0/15 in the Super Over after tying on 164.[46]

Tied Twenty20 matches were previously decided by a bowl-out.[47]

Women's and men's Twenty20 Internationals have been played since 2004 and 2005 respectively. To date, 76 nations have played the format, including all test playing nations.

In November 2011, the ICC released the first Twenty20 International rankings for the men's game, based on the same system as the Test and ODI rankings. The rankings cover a 2 to 3-year period, with matches since the most recent 1 August weighted fully, matches in the preceding 12 months weighted two-thirds, and matches in the 12 months preceding that weighted one-third. To qualify for the rankings, teams must have played at least eight Twenty20 Internationals in the ranking period.[48][49]

Until 2018, the ICC did not maintain a separate Twenty20 ranking for the women's game, instead aggregating performance over all three forms of the game into one overall women's teams ranking.[50] However, in October, the ICC announced that the women's ranking would be split between ODIs and T20Is, and released both tables shortly thereafter.[51] 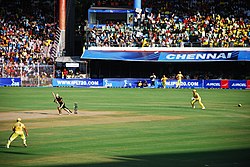 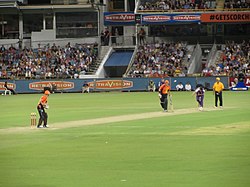 This is a list of the current Twenty20 domestic competitions in several of the leading cricket countries.