Standard Italian is based on Tuscan, specifically on its Florentine dialect, and it became the language of culture throughout Italy[1] due to the prestige of the works by Dante Alighieri, Petrarch, Giovanni Boccaccio, Niccolò Machiavelli, and Francesco Guicciardini. It would later become the official language of all the Italian states and of the Kingdom of Italy when it was formed. 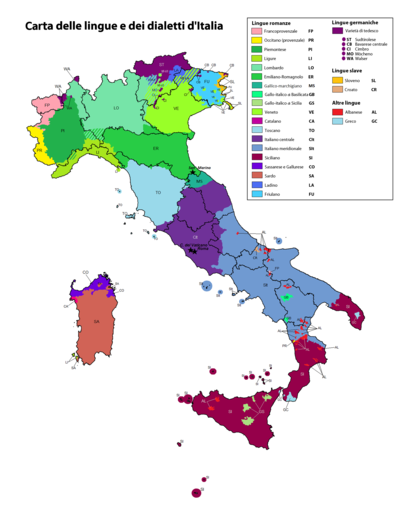 Dialects and Languages of Italy by groups[2][3][4][5] (Tuscan dialect group in light azure).

Tuscan is a dialect complex composed of many local variants, with minor differences among them.

The Northern Tuscan dialects are (from east to west):

The Southern Tuscan dialects are (from east to west):

Corsican on the island of Corsica and the Corso-Sardinian transitional varieties spoken in northern Sardinia (Gallurese and Sassarese) are classified by scholars as a direct offshoot from medieval Tuscan,[6] even though they now constitute a distinct linguistic group.

Excluding the inhabitants of Province of Massa and Carrara, who speak an Emilian variety of a Gallo-Italic language, around 3,500,000 people speak the Tuscan dialect.

The Tuscan dialect as a whole has certain defining features, with subdialects that are distinguished by minor details.

The Tuscan gorgia affects the voiceless stop consonants /k/ /t/ and /p/. They are often pronounced as fricatives in post-vocalic position when not blocked by the competing phenomenon of syntactic gemination:

Weakening of G and C

A phonetic phenomenon is the intervocalic weakening of the Italian soft g, the voiced affricate /dʒ/ (g as in judge) and soft c, the voiceless affricate /tʃ/ (ch as in church), known as attenuation, or, more commonly, as deaffrication.

This phenomenon is very evident in daily speech (common also in Umbria and elsewhere in Central Italy): the phrase la gente, 'the people', in standard Italian is pronounced [la ˈdʒɛnte], but in Tuscan it is [la ˈʒɛnte].

The sequence /la ˈtʃena/ la cena, 'the dinner', in standard Italian is pronounced [la ˈtʃeːna], but in Tuscan it is [la ˈʃeːna]. As a result of this weakening rule, there are a few minimal pairs distinguished only by length of the voiceless fricative (e.g. [laʃeˈrɔ] lacerò 'it/he/she ripped' vs. [laʃʃeˈrɔ] lascerò 'I will leave/let').

For example, il sole (the sun), pronounced in standard Italian as [il ˈsoːle], would be in theory pronounced by a Tuscan speaker [il ˈtsoːle]. However, since assimilation of the final consonant of the article to the following consonant tends to occur in exactly such cases (see "Masculine definite articles" below) the actual pronunciation will be usually [is ˈsoːle]. Affrication of /s/ can more commonly be heard word-internally, as in falso (false) /ˈfalso/ → [ˈfaltso]. This is a common phenomenon in Central Italy, but it is not exclusive to that area; for example it also happens in Switzerland (Canton Ticino).

There are two Tuscan historical outcomes of Latin ŏ in stressed open syllables. Passing first through a stage /ɔ/, the vowel then develops as a diphthong [wɔ]. This phenomenon never gained universal acceptance, however, so that while forms with the diphthong came to be accepted as standard Italian (e.g. fuoco, buono, nuovo), the monophthong remains in popular speech (foco, bono, novo).

A characteristic of Tuscan dialect is the use of the accusative pronoun te in emphatic clauses of the type "You! What are you doing here?".

A morphological phenomenon, cited also by Alessandro Manzoni in his masterpiece "I promessi sposi" (The Betrothed), is the doubling of the dative pronoun.

For the use of a personal pronoun as indirect object (to someone, to something), also called dative case, the standard Italian makes use of a construction preposition + pronoun a me (to me), or it makes use of a synthetic pronoun form, mi (to me). The Tuscan dialect makes use of both in the same sentence as a kind of intensification[citation needed] of the dative/indirect object:

This usage is widespread throughout the central regions of Italy, not only in Tuscany, and is often considered redundant and erroneous by language purists.

In some dialects the double accusative pronoun me mi vedi (lit: You see me me) can be heard, but it is considered an archaic form.

The singular and plural masculine definite articles can both be realized phonetically as [i] in Florentine varieties of Tuscan, but are distinguished by their phonological effect on following consonants. The singular provokes lengthening of the following consonant: [i kkaːne] 'the dog', whereas the plural permits consonant weakening: [i haːni] 'the dogs'. As in Italian, masc. sing. lo occurs before consonants long by nature or not permitting /l/ in clusters is normal (lo zio 'the uncle', lo studente 'the student'), although forms such as i zio can be heard in rustic varieties.

A morpholosyntactic phenomenon found throughout Tuscany is the personal use of the particle identical to impersonal si (not to be confused with passive si or the reflexive si), as the first person plural. It is basically the same as the use of on in French.

It's possible to use the construction si + Third person in singular, which can be preceded by the first plural person pronoun noi.

The phenomenon is found in all verb tenses, including compound tenses. In these tenses, the use of si requires a form of essere (to be) as auxiliary verb. If the verb is one that otherwise selects auxiliary avere in compound constructions, the past participle does not agree with the subject in gender and number:

If the verb normally requires essere, the past participle is marked as plural:

Another morphological phenomenon in the Tuscan dialect is what might appear to be shortening of first singular verb forms in the present tense of fare (to do, to make) and andare (to go).

These forms have two origins. Natural phonological change alone can account for loss of /d/ and reduction of /ao/ to /o/ in the case of /vado/ > */vao/ > /vo/. A case such as Latin: sapio > Italian so (I know), however, admits no such phonological account: the expected outcome of /sapio/ would be */sappjo/, with a normal lengthening of the consonant preceding yod.

What seems to have taken place is a realignment of the paradigm in accordance with the statistically minor but highly frequent paradigms of dare (give) and stare (be, stay). Thus so, sai, sa, sanno (all singulars and 3rd personal plural of 'know') come to fit the template of do, dai, dà, danno ('give'), sto, stai, sta, stanno ('be, stay'), and fo, fai, fa, fanno ('make, do') follows the same pattern. The form vo, while quite possibly a natural phonological development, seems to have been reinforced by analogy in this case.

Loss of infinitival "-re"

A phonological phenomenon that might appear to be a morphological one is the loss of the infinitival ending -re of verbs.

Stress remains on the same vowel that is stressed in the full form, so that the infinitive can come to coincide with various conjugated singulars: pèrde 'to lose', pèrde 's/he loses'; finì 'to finish', finì 's/he finished'. This homophony seldom, if ever, causes confusion, as they usually appear in distinct syntactic contexts.

While the infinitive without -re is universal in some subtypes such as Pisano-Livornese, in the vicinity of Florence alternations are regular, so that the full infinitive (e.g. vedere 'to see') appears when followed by a pause, and the clipped form (vedé) is found when phrase internal. The consonant of enclitics is lengthened if preceded by stressed vowel (vedéllo 'to see it', portàcci 'to bring us'), but not when the preceding vowel of the infinitive is unstressed (lèggelo 'to read it', pèrdeti 'to lose you').

A similar process is found in Catalan and its dialects. Final infinitive -r is not pronounced, so anar is realised as /ə'na/, as well as in Campidanese Sardinian.

The biggest differences among dialects is in the lexicon, which also distinguishes the different subdialects. The Tuscan lexicon is almost entirely shared with standard Italian, but many words may be perceived as obsolete or literary by non-Tuscans. There are a number of strictly regional words and expressions too.