Aberdeenshire Cuminestown Fyvie
This article is about the town in Scotland. For the locality in Australia, see Turriff, Victoria.
Town in Aberdeenshire, Scotland
Human settlement in Scotland

Turriff (from Scottish Gaelic Torraibh, meaning 'place of round hills')[1] is a town and civil parish in Aberdeenshire in Scotland. It lies on the River Deveron, about 166 feet (51 m) above sea level, and has a population of 5,708.[3] In everyday speech it is often referred to by its Scots name, Turra, which is derived from the Scottish Gaelic pronunciation. 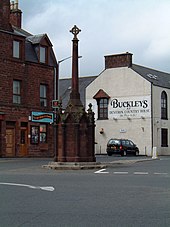 Turriff mercat cross. The local red sandstone used in the cross and the buildings behind it is characteristic of Turriff's older buildings.

Bank of Scotland, Santander UK (formerly Alliance & Leicester), Clydesdale Bank and TSB have branches in the town. The main supermarket chains are Tesco (whose premises have previously been occupied by Presto, Gateway and Somerfield) and Co-op Food and there are numerous specialist shops including two dispensing pharmacies. The town has a library, a sports centre and swimming pool. It is served by Turriff Cottage Hospital. In October 2013, Aberdeenshire Council approved a licence to occupy the Municipal Building (previously used as council offices) to a volunteer group for use as a general community centre, while they completed their Community Asset Transfer of the building. The group renamed the building Turriff Town House. The official handover was expected to be completed in 2016, but in June 2016 the group announced that they had not been successful in their Stage 2 Community Asset Transfer. The group retained the licence to occupy until 28 October 2016, when the building was returned to Aberdeenshire Council. Turriff and District Heritage Society were granted a Community Asset Transfer of the building and renamed it Turriff Heritage Centre.

Turriff has a senior football club called Turriff United F.C. who now play in the Highland League, having been voted into membership on 26 February 2009. Turriff United Ladies play in the SWFL Second Division and there is also an amateur club, Turriff Thistle, which plays in the AAFA Division Two.

The "Turriff Show", which is widely accepted as Scotland's largest two-day agricultural show, is held annually on the first Sunday and Monday of August; the Monday is a local holiday in the town. The show marked its 150th anniversary in 2014 with a visit from Queen Elizabeth II.

The town has its own weekly newspaper, the Turriff Advertiser, established in 1933 and commonly nicknamed The Squeak.

The Knights Templar appear to have had a base in the area, and a nearby site is still known as "Temple Brae".[4]

Turriff was notable as the scene of the very first engagements of the Wars of the Three Kingdoms (1639–51). Early in 1639, the Marquis of Huntly assembled his forces here, and thereafter went to Kintore in lower Aberdeenshire, eventually marching from there to Aberdeen itself. The Marquis — being informed shortly after his arrival in Aberdeen that a meeting of Covenanters was to be held in Turriff on the fourteenth of February — resolved to disperse them, by occupying the town with 2000 men. The incident was known as the "Raid of Turriff" and was followed a few days later by a minor engagement known as the "Trot of Turriff".[5]

More recently, the 1913 Turra Coo incident in the parish was the result of a local refusal to pay National Insurance when this was introduced by Lloyd George's government. Sheriff's officers seized a cow from a local farmer who refused to pay National Insurance contributions for his workers. The officers had difficulty selling the cow, as locals were sympathetic toward the farmer.[6] Eventually they brought in an outside auctioneer, but the auction was disrupted by protesters and the cow escaped. A statue of the "coo" was erected in 2010 in the town centre at the junction of High Street and Main Street and has become a popular emblem for the town.

Historically, Turriff was an important centre for agricultural trade, with its mart being mentioned in the mid-19th century Second Statistical Account of Scotland as one of the largest in the country. The mart finally ceased operation in December 1989, having been eclipsed by the newer Thainstone Mart at Inverurie. At one time the town was served by Turriff station on Banff, Macduff and Turriff Junction Railway.