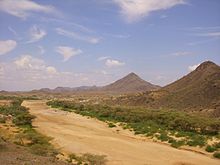 The Turkwel River[1] (sometimes spelled Turkwell River[2]) is a river flowing from Mount Elgon in the border of Kenya and Uganda to Lake Turkana. The river is called the Suam River from its source to the border with the West Pokot County of Kenya. The name Turkwel is derived from the Turkana name for the river, Tir-kol, which means translates to a river that "withstands the wilderness". The Turkwel begins from the lush green slopes of Mount Elgon and the Cherangani Hills, traverses the Southern Turkana Plains, crosses Loturerei Desert near Lodwar and empties to the world's largest desert lake, Lake Turkana.[3] The river's flow is seasonally varied, and it is subject to flash floods in the rainy season.[3]

The controversial Turkwel Dam was built by the Kenyan government from 1986 to 1991 with the help of France. The plan was to harness the waters of the Turkwel. The project was initially supposed to cost 4 billion Kenyan shillings, but ended up costing more than 20 billion. The dam partially filled the Turkwel Gorge[4] and created the Turkwel Gorge Reservoir.[5]