The Tsimshianic languages were included by Edward Sapir in his Penutian hypothesis, which is currently not widely accepted, at least in its full form. The Penutian connections of Tsimshianic have been reevaluated by Marie-Lucie Tarpent, who finds the idea probable,[6] though others hold that the Tsimshianic family is not closely related to any North American language.[7][8] 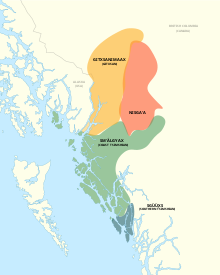 Nisga’a and Gitksan are very closely related and are usually considered dialects of the same language by linguists. However, speakers from both groups consider themselves ethnically separate from each other and from the Tsimshian and thus consider Nisga’a and Gitksan to be separate languages. Coast and Southern Tsimshian are also often regarded as dialects of the same language.

As of 2013, Tsimshian courses are available at the University of Alaska Southeast.[9]