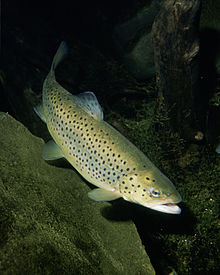 Trout is the common name for a number of species of freshwater fish belonging to the genera Oncorhynchus, Salmo and Salvelinus, all of the subfamily Salmoninae of the family Salmonidae. The word trout is also used as part of the name of some non-salmonid fish such as Cynoscion nebulosus, the spotted seatrout or speckled trout.

Lake trout and most other trout live in freshwater lakes and rivers exclusively, while there are others, such as the steelhead, a form of the coastal rainbow trout, that can spend two or three years at sea before returning to fresh water to spawn (a habit more typical of salmon). Arctic char and brook trout are part of the char family. Trout are an important food source for humans and wildlife, including brown bears, birds of prey such as eagles, and other animals. They are classified as oily fish.[1]

The name "trout" is commonly used for some species in three of the seven genera in the subfamily Salmoninae: Salmo, Atlantic species; Oncorhynchus, Pacific species; and Salvelinus, which includes fish also sometimes called char or charr. Fish referred to as trout include: 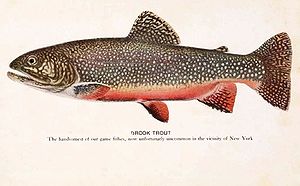 Fish from other families

Trout that live in different environments can have dramatically different colorations and patterns. Mostly, these colors and patterns form as camouflage, based on the surroundings, and will change as the fish moves to different habitats. Trout in, or newly returned from the sea, can look very silvery, while the same fish living in a small stream or in an alpine lake could have pronounced markings and more vivid coloration; it is also possible that in some species, this signifies that they are ready to mate. In general, trout that are about to breed have extremely intense coloration and can look like an entirely different fish outside of spawning season. It is virtually impossible to define a particular color pattern as belonging to a specific breed; however, in general, wild fish are claimed to have more vivid colors and patterns.

Trout have fins entirely without spines, and all of them have a small adipose fin along the back, near the tail. The pelvic fins sit well back on the body, on each side of the anus. The swim bladder is connected to the esophagus, allowing for gulping or rapid expulsion of air, a condition known as physostome. Unlike many other physostome fish, trout do not use their bladder as an auxiliary device for oxygen uptake, relying solely on their gills.

There are many species, and even more populations, that are isolated from each other and morphologically different. However, since many of these distinct populations show no significant genetic differences, what may appear to be a large number of species is considered a much smaller number of distinct species by most ichthyologists. The trout found in the eastern United States are a good example of this. The brook trout, the aurora trout, and the (extinct) silver trout all have physical characteristics and colorations that distinguish them, yet genetic analysis shows that they are one species, Salvelinus fontinalis.

Lake trout (Salvelinus namaycush), like brook trout, belong to the char genus. Lake trout inhabit many of the larger lakes in North America, and live much longer than rainbow trout, which have an average maximum lifespan of 7 years. Lake trout can live many decades, and can grow to more than 30 kilograms (66 lb). 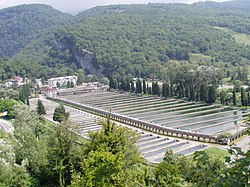 A trout farm in Sochi, Russia

Trout are usually found in cool (50–60 °F or 10–16 °C), clear streams and lakes, although many of the species have anadromous strains as well. Young trout are referred to as troutlet, troutling or fry. They are distributed naturally throughout North America, northern Asia and Europe. Several species of trout were introduced to Australia and New Zealand by amateur fishing enthusiasts in the 19th century, effectively displacing and endangering several upland native fish species. The introduced species included brown trout from England and rainbow trout from California. The rainbow trout were a steelhead strain, generally accepted as coming from Sonoma Creek. The rainbow trout of New Zealand still show the steelhead tendency to run up rivers in winter to spawn.[2]

In Australia the rainbow trout was introduced in 1894 from New Zealand and is an extremely popular gamefish in recreational angling.[3] Despite severely impacting the distribution and abundance of native Australian fish, such as the climbing galaxias, millions of rainbow and other trout species are released annually from government and private hatcheries.[3]

The closest resemblance of seema trout and other trout family can be found in the Himalayan Region of India, Nepal, Bhutan, Pakistan and in Tian Shan mountains of Kyrgyzstan.[clarification needed] 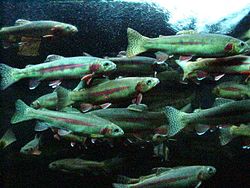 Trout generally feed on other fish, and soft bodied aquatic invertebrates, such as flies, mayflies, caddisflies, stoneflies, mollusks and dragonflies. In lakes, various species of zooplankton often form a large part of the diet. In general, trout longer than about 300 millimetres (12 in) prey almost exclusively on fish, where they are available. Adult trout will devour smaller fish up to 1/3 their length. Trout may feed on shrimp, mealworms, bloodworms, insects, small animal parts, and eel.

Trout who swim the streams love to feed on land animals, aquatic life, and flies.[4] Most of their diet comes from macroinvertebrates, or animals that do not have a backbone like snails, worms’ insects, etc. they also eat flies, most people who try to use lures to fish trout mimic flies because they are one of trout’s most fed on meals.[5] Trout also love some land animals who make their way into the water. Insects like grasshoppers are a meal trout love; they also eat small animals like mice that fall in. Only very big trout have mouths capable of eating mice. They have their diet of aquatic life like minnows or crawfish. Trout have a diverse diet they follow; they have plenty of different oppositions.[6] 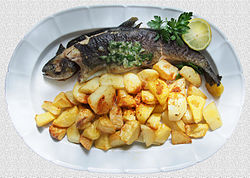 As a group, trout are somewhat bony, but the flesh is generally considered to be tasty. The flavor of the flesh is heavily influenced by the diet of the fish. For example, trout that have been feeding on crustaceans tend to be more flavorful than those feeding primarily on insect life. Additionally, they provide a good fight when caught with a hook and line, and are sought after recreationally. Because of their popularity, trout are often raised on fish farms and planted into heavily fished waters, in an effort to mask the effects of overfishing. Farmed trout and char are also sold commercially as food fish. Trout is sometimes prepared by smoking.[7]

According to the British Nutrition Foundation, trout contain one of the lowest amounts of dioxins (a type of environmental contaminant) of all oily fishes.

While trout can be caught with a normal rod and reel, fly fishing is a distinctive method developed primarily for trout, and now extended to other species. Understanding how moving water shapes the stream channel makes it easier to find trout. In most streams, the current creates a riffle-run-pool pattern that repeats itself over and over. A deep pool may hold a big brown trout, but rainbows and smaller browns are likely found in runs. Riffles are where fishers will find small trout, called troutlet, during the day and larger trout crowding in during morning and evening feeding periods.[9]

Fishing for trout under the ice generally occurs in depths of 4 to 8 feet. Because trout are cold water fish, during the winter they move from up-deep to the shallows, replacing the small fish that inhabit the area during the summer. Trout in winter constantly cruise in shallow depths looking for food, usually traveling in groups, although bigger fish may travel alone and in water that's somewhat deeper, around 12 feet. Rainbow, Brown, and Brook trout are the most common trout species caught through the ice.[11]

By information from International Game Fish Association (IGFA), the most outstanding records are:[12]

Salmonid populations in general have been declining due to numerous factors. Non-native, invasive species, hybridization, wildfires, and climate change are just a few examples. Native salmonid fish in the western and southwestern United States are threatened by non-native species that were introduced decades ago. Non-native salmonids were introduced to enrich recreational fishing[13], however, they quickly started outcompeting and displacing native salmonids upon their arrival. Non-native, invasive species are quick to adapt to their new environment and learn to outcompete any native species, making them a force the native salmon and trout have to reckon with. Not only do the non-native fish drive the native fish to occupy new niches, but they also try to hybridize with them, contaminating the native gene construction. As more hybrids between native and non-native fish are formed, the lineage of the pure fish is continuously being contaminated by other species and soon may no longer represent the sole native species. The Rio Grande Cutthroat trout (Oncorhynchus clarki virginalis) are susceptible to hybridization with other salmonids such as rainbow trout (Oncorhynchus mykiss) and yield a new “cut-bow” trout, which is a contamination of both lineages’ genes. One solution to this issue is implemented by New Mexico Game and Fish hatcheries: stock only sterile fish in river streams. Hatcheries serve as a reservoir of fish for recreational activities but growing and stocking non-sterile fish would worsen the hybridization issue on a quicker, more magnified time scale. By stocking sterile fish, the native salmonids can’t share genes with the non-native hatchery fish, thus, preventing further gene contamination of the native trout in New Mexico. Fire is also a factor in deteriorating Gila trout (Oncorhynchus gilae) populations because of the ash and soot that can enter streams following fires.[14] The ash lowers water quality, making it more difficult for the Gila trout to survive. In some New Mexico streams, the native Gila trout will be evacuated from streams that are threatened by nearby fires and be reintroduced after the threat is resolved. Again, climate change is also dwindling native salmonid populations. Trout prefer cold water (50-60° F) streams to spawn and live, but warming water temperatures are altering this ecosystem and further deteriorative native populations.