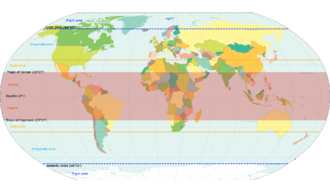 World map with the intertropical zone highlighted in crimson 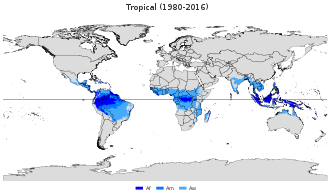 Areas of the world with tropical climates

The tropics are the region of Earth surrounding the Equator. They are delimited in latitude by the Tropic of Cancer in the Northern Hemisphere at 23°26′11.8″ (or 23.4366°) N and the Tropic of Capricorn in the Southern Hemisphere at 23°26′11.8″ (or 23.4366°) S; these latitudes correspond to the axial tilt of the Earth. The tropics are also referred to as the tropical zone and the torrid zone (see geographical zone). The tropics include all the areas on Earth where the Sun contacts a point directly overhead at least once during the solar year (which is a subsolar point) - thus the latitude of the tropics is roughly equal to the angle of the Earth's axial tilt.

In terms of climate, the tropics receive sunlight that is more direct than the rest of Earth and are generally hotter and wetter. The word "tropical" sometimes refers to this sort of climate rather than to the geographical zone. The tropical zone includes deserts and snow-capped mountains, which are not tropical in the climatic sense. The tropics are distinguished from the other climatic and biomatic regions of Earth, which are the middle latitudes and the polar regions on either side of the equatorial zone. 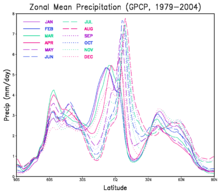 A graph showing the zonally averaged monthly precipitation. The tropics receive more precipitation than higher latitudes. The precipitation maximum, which follows the solar equator through the year, is under the rising branch of the Hadley circulation; the sub-tropical minima are under the descending branch and cause the desert areas.

Tropical sunset over the sea in Kota Kinabalu, Malaysia

"Tropical" is sometimes used in a general sense for a tropical climate to mean warm to hot and moist year-round, often with the sense of lush vegetation.

Many tropical areas have a dry and wet season. The wet season, rainy season or green season is the time of year, ranging from one or more months, when most of the average annual rainfall in a region falls.[4] Areas with wet seasons are disseminated across portions of the tropics and subtropics.[5] Under the Köppen climate classification, for tropical climates, a wet-season month is defined as a month where average precipitation is 60 millimetres (2.4 in) or more.[6] Tropical rainforests technically do not have dry or wet seasons, since their rainfall is equally distributed through the year.[7] Some areas with pronounced rainy seasons see a break in rainfall during mid-season when the intertropical convergence zone or monsoon trough moves poleward of their location during the middle of the warm season;[8] typical vegetation in these areas ranges from moist seasonal tropical forests to savannahs.

When the wet season occurs during the warm season, or summer, precipitation falls mainly during the late afternoon and early evening hours. The wet season is a time when air quality improves, freshwater quality improves and vegetation grows significantly, leading to crop yields late in the season. Floods cause rivers to overflow their banks, and some animals to retreat to higher ground. Soil nutrients diminish and erosion increases. The incidence of malaria increases in areas where the rainy season coincides with high temperatures. Animals have adaptation and survival strategies for the wetter regime. The previous dry season leads to food shortages into the wet season, as the crops have yet to mature.

However, regions within the tropics may well not have a tropical climate. Under the Köppen climate classification, much of the area within the geographical tropics is classed not as "tropical" but as "dry" (arid or semi-arid), including the Sahara Desert, the Atacama Desert and Australian Outback. Also, there are alpine tundra and snow-capped peaks, including Mauna Kea, Mount Kilimanjaro, and the Andes as far south as the northernmost parts of Chile and Perú. 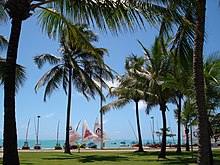 Coconut palms in the warm, tropical climate of northern Brazil 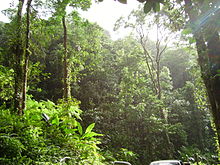 In biogeography, the tropics are divided into Paleotropics (Africa, Asia and Australia) and Neotropics (Caribbean, Central America, and South America). Together, they are sometimes referred to as the Pantropic. The system of biogeographic realms differs somewhat; the Neotropical realm includes both the Neotropics and temperate South America, and the Paleotropics correspond to the Afrotropical, Indomalayan, Oceanian, and tropical Australasian realms.

Tropicality refers to the image that people outside the tropics have of the region, ranging from critical to verging on fetishism. The idea of tropicality gained renewed interest in geographical discourse when French geographer Pierre Gourou published Les Pays Tropicaux (The Tropical World in English), in the late 1940s.[9]

Tropicality encompassed two images. One, is that the tropics represent a 'Garden of Eden', a heaven on Earth, a land of rich biodiversity - aka a tropical paradise.[10] The alternative is that the tropics consist of wild, unconquerable nature. The latter view was often discussed in old Western literature more so than the first.[10] Evidence suggests over time that the view of the tropics as such in popular literature has been supplanted by more well-rounded and sophisticated interpretations.[11]

Western scholars tried to theorize reasons about why tropical areas were relatively more inhospitable to human civilisations then those existing in colder regions of the Northern Hemisphere. A popular explanation focused on the differences in climate. Tropical jungles and rainforests have much more humid and hotter weather than colder and drier temperaments of the Northern Hemisphere. This theme led to some scholars to suggest that humid hot climates correlate to human populations lacking control over nature e.g. ' the wild Amazonian rainforests'.[12]