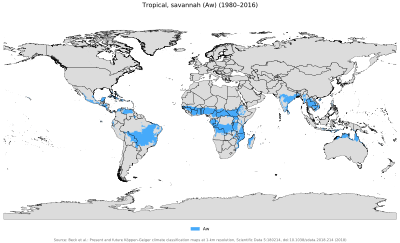 Tropical savanna climate or tropical wet and dry climate is a type of climate that corresponds to the Köppen climate classification categories Aw (for a dry winter) and As (driest month having less than 60 mm (2.36 inches) of precipitation and also less than

This latter fact is in direct contrast to a tropical monsoon climate, whose driest month sees less than 60 mm of precipitation but has more than

of precipitation. In essence, a tropical savanna climate tends to either see less rainfall than a tropical monsoon climate or have more pronounced dry season(s).

In tropical savanna climates, the dry season can become severe, and often drought conditions prevail during the course of the year. Tropical savanna climates often feature tree-studded grasslands, rather than thick jungle. It is this widespread occurrence of tall, coarse grass (called savanna) which has led to Aw and As climates often being referred to as tropical savanna. However, there is some doubt whether tropical grasslands are climatically induced. Additionally, pure savannas, without trees, are the exception rather than the rule.

There are generally four types of tropical savanna climates:

Tropical savanna climates are most commonly found in Africa, Asia and South America. The climate is also prevalent in sections of Central America, northern Australia, the Pacific Islands, in sections of North America and some islands in the Caribbean. Most places that have this climate are found at the outer margins of the tropical zone, but occasionally an inner-tropical location (e.g., San Marcos, Antioquia, Colombia) also qualifies. Similarly, the Caribbean coast, eastward from the Gulf of Urabá on the Colombia – Panamá border to the Orinoco river delta, on the Atlantic Ocean (ca. 4,000 km), have long dry periods (the extreme is the BSh climate (see below), characterized by very low, unreliable precipitation, present, for instance, in extensive areas in the Guajira, and Coro, western Venezuela, the northernmost peninsulas in South America, which receive <300 mm total annual precipitation, practically all in two or three months). This condition extends to the Lesser Antilles and Greater Antilles forming the Circumcaribbean dry belt. The length and severity of the dry season diminishes inland (southward); at the latitude of the Amazon river—which flows eastward, just south of the equatorial line—the climate is Af. East from the Andes, between the arid Caribbean and the ever-wet Amazon, are the Orinoco river llanos or savannas, from where this climate takes its name.

Sometimes As is used in place of Aw if the dry season occurs during the time of higher sun and longer days, such as in Honolulu, Hawaii.[2] This may also be due to a rain shadow effect that cuts off summer precipitation in a tropical area. This is the case in East Africa (Mombasa, Kenya, Somalia), Sri Lanka (Trincomalee) and coastal regions of Northeastern Brazil (from Fortaleza through Natal to Maceió), for instance. The difference between 'summer' and 'winter' in such locations is usually so slight that a distinction between an As and Aw climate is a quibble. In most places that have tropical wet and dry climates, however, the dry season occurs during the time of lower sun and shorter days because of reduction of or lack of convection, which in turn is due to the meridional shifts of the Intertropical Convergence Zone during the entire course of the year.

Cities with a tropical savanna climate

Some examples of tropical savanna climates