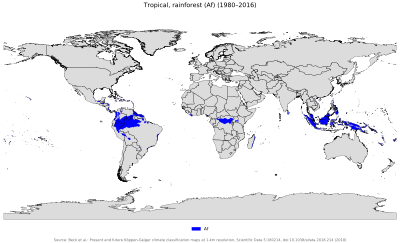 Tropical rain forests have a type of tropical climate in which there is no dry season—all months have an average precipitation value of at least 60 mm (2.4 in). In rain forest climates the dry season is very short, and rainfall is normally heavy throughout the year. One day in a tropical rain forest climate can be very similar to the next, while the change in temperature between day and night may be larger than the average change in temperature during the year.[1]

When tropical rain forest climates are more dominated by the Intertropical Convergence Zone (ITCZ) than the trade winds (and with no or rare cyclones), so usually located near the equator, they are also called equatorial climates. Otherwise, when they are more dominated by the trade winds than the ITCZ, they are called tropical trade-wind climates. In pure equatorial climates, the atmospheric pressure is low, almost constant so the (horizontal) pressure gradient is low. Consequently the winds are rare and usually weak (except sea and land breezes in coastal areas) while in tropical trade-wind climates, often located at higher latitudes than the equatorial climates, wind is almost permanent which incidentally explains why rainforest formations are impoverished compared to those of equatorial climates due to their necessary resistance to strong winds accompanying tropical disturbances.[2]

A tropical rain forest climate is usually found at latitudes within 15 degrees North and South of the equator, which are dominated by the Intertropical Convergence Zone (ITCZ). The climate is most commonly found in South America, Central Africa, Southeast Asia and Oceania. These rain forests are uniformly and monotonously wet throughout the year. Locations in Oceania, areas along the coast of South and Central America, from Ecuador to Belize, parts of Central Africa, and much of Indonesia have this type of hot and humid climate.