Advertisement - You can get this game from STEAM
For other uses, see Trois-Rivières (disambiguation).
City in Quebec, Canada

listen); "Three Rivers") is a city in the Mauricie administrative region of Quebec, Canada, at the confluence of the Saint-Maurice and Saint Lawrence rivers, on the north shore of the Saint Lawrence River across from the city of Bécancour. It is part of the densely populated Quebec City–Windsor Corridor and is approximately halfway between Montreal and Quebec City. Trois-Rivières is the economic and cultural hub of the Mauricie region.[5] The settlement was founded by French colonists on July 4, 1634, as the second permanent settlement in New France,[6] after Quebec City in 1608. In 2016, the city's population was 134,413.

The city's name, which is French for 'three rivers', is named for the fact the Saint-Maurice River has three mouths at the Saint Lawrence River; it is divided by two islands in the river. Historically, in English this city was known as Three Rivers. Since the late 20th century, when there has been more recognition of Quebec and French speakers, the city has generally been referred to as Trois-Rivières in both English and French. The anglicized name still appears in many areas of the town (e.g., the city's Three Rivers Academy), bearing witness to the influence of English settlers in the town. The city's inhabitants are known as Trifluviens (Trifluvians).

The name of Trois-Rivières, which dates from the end of the 16th century, was used by French explorers in reference to the three channels in the Saint-Maurice River formed at its mouth with the Saint Lawrence, as it is divided by two islands, Potherie and Saint-Quentin island. The city occupies a location known to the French since 1535, when Jacques Cartier, in a trip along the St. Lawrence, stopped to plant a cross on Saint-Quentin island. But the Three Rivers name is used for the first time in 1599 by Sieur François Gravé Du Pont, a geographer under Champlain, whose records confirmed the name in 1603. As Sieur Gravé Du Pont sailed upriver toward Montreal, he saw what appeared to be three separate tributaries. He did not know two large islands divide the course of the Saint-Maurice River in three parts where the latter flows into the St. Lawrence River.

For thousands of years, the area that would later become known as Trois-Rivières was frequented by Indigenous peoples. The historic Algonquin and Abenaki peoples used it as a summer stopping place. They would fish and hunt here, as well as gather roots and nuts. The area was rich in resources. The French explorer Jacques Cartier described the site while on his second journey to the New World in 1535. The name "Trois-Rivières", however, was not given until 1599, by Captain Dupont-Gravé, and first appeared on maps of the area dated 1601.[8]

The city was the second to be founded in New France (after Quebec City, before Montreal). Given its strategic location, it played an important role in the colony and in the fur trade with First Nations peoples. The settlement became the seat of a regional government in 1665. Ursuline nuns first arrived at the settlement in 1697, where they founded the first school and helped local missionaries to Christianize the local Aboriginals and developing class of Métis.

French sovereignty in Trois-Rivières continued until 1760, when the city was captured as part of the British conquest of Canada during the Seven Years' War. Sixteen years later, on June 8, 1776, it was the theatre of the Battle of Trois-Rivières (part of the ill-fated invasion of the province of Quebec by les Bostonnais, Americans from the Boston area) during the American Revolutionary War.

Trois-Rivières continued to grow in importance throughout this period and beyond. In 1792 it was designated as the seat of a judicial district. In 1852, the Roman Catholic church made this the see of the Diocese of Trois-Rivières.

In 1816, Captain A.G. Douglas, a former adjutant at the British military college at Great Marlow, recommended a military college for Catholic and Protestant boys be established at Trois-Rivières. He proposed it operate in a disused government house and he would be superintendent. Douglas' college was intended as a boarding school to educate the young sons of officers, amongst others, in Latin, English language, French Language, History, Geography, Drawing and Mathematics. This preceded the founding of the Royal Military College of Canada in 1876.[11]

In 1908, the greater part of the city of Trois-Rivières was destroyed by a fire; most of the city's original buildings, many dating to the French colonial years, were destroyed. Among the surviving buildings were the Ursuline Monastery and the De Tonnancour Manor. As a result of the destruction, a major redesign and renovation of the city was undertaken, including the widening and renewal of many of the city's roads. Many new businesses and industries became established in the town, attracting additional residents.

During the mid-century, the city became heavily industrialized and lost jobs during the later restructuring. In the 1960s, Trois-Rivières undertook a large-scale project of economic diversification, including founding several cultural institutions and attractions. The Old City of Trois-Rivières was declared an "historic sector" in 1964. The Laviolette Bridge, linking Trois-Rivières to Bécancour and the south shore of the Saint-Lawrence River, was opened officially on December 20, 1967. In 1969, the city founded the Université du Québec à Trois-Rivières, known for its chiropractic school, its podiatric medical education, and its programs for primary and secondary school education.

Although historically an important centre of commerce, trade and population, Trois-Rivières has been superseded by the two major cities of Quebec: the metropolis of Montreal and the capital of Quebec City. It remains as one of the principal medium-sized cities of Quebec, along with Saguenay, Sherbrooke, and Gatineau.

See also: Our Lady of the Cape

The city's main thoroughfare is Boulevard des Forges, an area several blocks long in the heart of the Old Town composed of century-old buildings housing a great variety of cafés, restaurants, clubs, bars, and shops. In the warmer months, the area is regularly closed to vehicular traffic to accommodate various festivals and events, turning the downtown core into a pedestrian mall.

Notable landmarks include the Forges du Saint-Maurice, a foundry dating back to the 1730s, the Ursulines Monastery, and Notre-Dame-du-Cap Basilica. 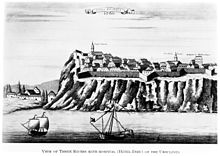 Trois-Rivières is Canada's oldest industrial city, with its first foundry established in 1738.[12] The forge produced iron and cast for 150 years, much of it being shipped to France to be used in French navy ships.[13] The first port facility was built in 1818 near rue Saint-Antoine, and today handles 2.5 million tonnes of cargo annually.[14] The first railway was built in 1879 to support the growing lumber industry.[15]

From the late 1920s until the early 1960s, the city was known as the pulp and paper industry capital of the world.[16] The city once had five mills in operation (Trois-Rivières Ouest, Wayagamack, C.I.P., and St-Maurice Paper). Today, there are three mills left operating (Kruger Trois-Rivières Ouest, Kruger Wayagamack and Cascades Lupel ex-St-Maurice Paper); the closures resulted largely to a decline in newsprint demand and globalization. The closures were not limited to just the pulp and paper industry. Trois-Rivières had an industrial decline in the 1980s and 1990s, when several textile mills were closed after owners moved jobs offshore. Unemployment rose to 14 percent in the 1990s.[17]

Trois-Rivières is attempting an industrial revitalization by establishing technology parks and taking advantage of its central location to both Montreal and Quebec City, its university and port. An example of the new economy is Marmen Incorporated, which manufactures wind turbine towers and employs 1,000 people between its operations in Trois-Rivières and Matane.

The city's other prominent industries include metal transformation, electronics, thermoplastics, and cabinet making. An industrial park adjoining Trois-Rivières Airport serves also as a major centre for the aeronautical industry. Also, the production of food crops is still important to the economy. 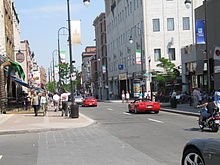 Trois-Rivières is officially the "Poetry Capital of Quebec".[29][30] Numerous plaques displaying poetic verses are installed throughout the centre of the city. An International Festival of Poetry is held annually in the first week of October.

Prior to amalgamation in 2001, the new city of Trois-Rivières was divided among six municipalities.

Since its incorporation in 1845, the city has had thirty-six mayors. The mayor presides over the Trois-Rivières City Council.

In baseball, Trois-Rivières is represented by the Frontier League's Trois-Rivières Aigles which play their home games at Stade Stereo+. In ice hockey, Trois-Rivières has had several teams in the Ligue Nord-Américaine de Hockey, typically with home games at the Colisée de Trois-Rivières. The city is also the site of the only remaining pari-mutuel (wagering) harness racing track in Quebec, Hippodrome de Trois-Rivières, which operates live standardbred racing from May through October. In 2014, the hippodrome has resurrected the Prix d'Été, a once major Canadian race for four-year-old pacers that had been contested in Montreal until 1992.

Local bus service is provided by the Société de transport de Trois-Rivières. The Laviolette Bridge links Trois-Rivières to Bécancour of the Centre-du-Québec administrative region on the south shore of the Saint Lawrence River. The Laviolette Bridge is the only bridge across the Saint Lawrence River between Montreal and Quebec City; therefore it provides an important connection between the north and south shores of the river. Known for its impressive structure, its elegant aesthetics, the bridge has become a major landmark of Trois-Rivières and the Mauricie region. Approximately 40,000 vehicles cross the bridge each day. An airport also serves the city.

On April 8, 2014 during morning commute an SUV fell into a giant pothole in Trois-Rivières caused by heavy rain accumulation. Nobody was injured during the incident.[38]

The city hosts a major ice-free port on the Saint Lawrence River, handling about 300 ships per annum.[39] 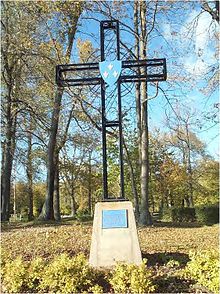 Saint-Quentin Island lies at the confluence of the Saint-Maurice River and St. Lawrence River, where the city of Trois-Rivières developed. With the islands Saint-Christophe and De La Poterie, it creates three channels at the mouth of the Saint-Maurice River, where it flows into St. Lawrence River. The island was named in honor of judge Quentin Moral, also said to be a fur trader and one of the first dealers on this island.[40] It is now a centre of popular outdoor activities and relaxation at the hearth of city. The patron saint of the island is Quentin de Rome.

It was first inhabited by an Algonquin tribe who cultivate corn in the bottomlands of the river. On October 7, 1535, Jacques Cartier planted a cross on the island and proclaimed sovereignty of French on this territory. A commemorative wrought iron cross was erected at the site associated with Cartier's claim. The natural environment of Saint-Quentin has remained virtually unchanged. For nearly a century, it was not developed or cultivated.

Since 1930, the island has become more important as a destination for recreation. The island belonged at the time to Quebec Savings and Trust Company Limited and the Canada Power and Paper Corporation. The city bid for the land in 1933, but did not take ownership until November 3, 1947. During World War II, it was the site of a training camp for the Royal Canadian Navy. Services were gradually introduced in 1950.

The park and the beach on the island Saint-Quentin were officially inaugurated on June 24, 1962, in the presence of 5,000 people. There were more than 100 000 visitors that year.[41] Since then, many facilities have been developed on the island, including a marina, a bike path, an interpretative trail, an ice rink, and camping ground. Several happenings and festivals are held annually on the island.