Established in 1962 after Trinidad and Tobago's independence from Britain, the TTDF is one of the largest Military forces in the English speaking Caribbean. Its mission statement is to "defend the sovereign good of The Republic of Trinidad and Tobago, contribute to the development of the national community and support the State in the fulfillment of its national and international objectives". The Trinidad and Tobago Defence Force is made up of four distinct arms; The Regiment/"Army", the Coast Guard, the Air Guard and the Defence Force Reserves, which all fall under the authority of the Ministry of National Security. The TTDF has the world's only Military steelband.

The Commander in Chief of the Defence Force is the country's President, Paula-Mae Weekes. The current Chief of Defence Staff is Air Commodore Darryl Daniel, who replaced Rear Admiral Hayden Pritchard upon his retirement on March 25th, 2019.

Trinidad and Tobago soldier in training.

Also, as one of the larger military forces in the region, the Trinidad and Tobago Regiment is also one of the main units used in peacekeeping and humanitarian situations from the Caribbean region.

Although it is called the Trinidad & Tobago Regiment, the TTR is in fact structured more like a light infantry brigade, with a pair of infantry battalions, plus engineering and logistic support units:

2nd Battalion (Infantry), Trinidad and Tobago Regiment: This is also a light infantry battalion. Formerly located at Camp Mausica, since then it has been relocated to the Chaguaramas Heliport and La Romain.

4th Battalion (Support and Service Battalion): This provides logistic and administrative support for the regiment. It is located at the Teteron Barracks, Teteron Bay, Chaguaramas.

The Regiment also maintains a Camp Omega, also at Chaguaramas, which is used primarily for infantry training.

Trinidad and Tobago has a unique and highly trained group of special forces that is tasked to fulfill counter narcotics and counter terrorism operations. Soldiers are sent to the United States or the United Kingdom for their training. Their motto is "To Find a Way."

The Trinidadian Scarborough at Portsmouth in 2010. 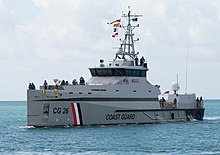 The Trinidad and Tobago Coast Guard is responsible for the maritime capabilities of the TTDF. The Coast Guard consists of a number of vessels designated CG<number>. The current Commanding Officer is Captain Don Polo.

Its mission statements is to "To Defend the Sovereign Good of the Republic of Trinidad and Tobago and to provide on a continuous basis, quality service for security and safety within the Maritime Boundaries, and in any other area of responsibility agreed to by the State to fulfill its International Obligations".

The Coast Guard is primarily involved with the Drug Trade interdiction as well as Search and Rescue within the waters of Trinidad and Tobago and neighbouring Islands.[1] However the Coast Guard has been involved in major incidents. During the 1970 Army Mutiny in Trinidad and Tobago, the Coast Guard prevented the mutineers from convoying to Port of Spain by firing on an access road from the Regiment base at Teteron Barracks in Chaguaramas. The Coast Guard also played a role during the 1990 Jamaat al Muslimeen coup attempt, providing logistical and naval support to the ground forces of the Regiment, posted outside of the besieged city limits.

National Roles of the Trinidad and Tobago Coast Guard include:

In August 2018, the government of Trinidad and Tobago signed contract with Austal to build two Cape-class patrol boats and scheduled to receive boats in mid-2020.[6]

As of February 2020, the Trinidad and Tobago Coast Guard fleet consists of thirteen ships:

The Air Wing of the Trinidad and Tobago Defence force was formed in February 1966, and was initially part of the Coast Guard and was called the Air Wing of the Coast Guard or the Air Wing. In 1977, it was separated as its own entity. In 2005 it was renamed the Trinidad & Tobago Air Guard (TTAG). Its bases are at Piarco International Airport, Crown Point International Airport, and the Heliport at Chaguaramas. Its purposes are to protect and patrol Trinidad and Tobago's airspace, and is also used for transport, search and rescue, and liaison. The current commander of the Air Guard is Group Captain Kester Weekes. He has taken command of the unit in 2019, succeeding Air Commodore Daryl Daniel upon his promotion to Chief of Defence Staff in March 2019.[12]

Aircraft ordered: Four Agusta Westland AW139 Helicopters. Two of the helicopters were delivered in May 2011, and the other two in July 2012. The helicopters will be used by the Trinidad & Tobago Air Guard for surveillance and reconnaissance missions related to search and rescue, border patrol and drug interdiction.

The Minister of National Security announced that the establishment of a military airfield, construction of an operations/administrative building at the Piarco Air Station and new helicopters would be purchased to equip the Air Guard. The minister also promised training from various international bodies. Cabinet agreed to the change of rank designations from naval to the corresponding aviation designations and the creation of 66 ranks on the establishment of the Air Guard. However even though it is separate TT Air guard still reports to Coast Guard officials.

The Defence Force Reserves, previously called the Volunteer Defence Force, is the non active duty arm of the Trinidad and Tobago Defence Force. Its mission statement is "To be a highly professional, well trained combat ready force that will respond effectively in support of our regular forces and the national community". The Defence Force Reserves is capable of providing reinforcement and be a force multiplier in the event that the Defence Force is called upon to carry out its roles of aid to the civil power. Established in September 1963, its primary purpose at that time was to provide essential reinforcements to the regular force. Today, those roles have grown to include assisting in the promotion of hemispheric and international security and development, with a well equipped force, trained in a broad range of disciplines and actively involved in community development. In recent years, the Reserves have been called out to assist with law enforcement and most recently to assist with the security in Trinidad's hosting the 5th Summit of the Americas in 2009.