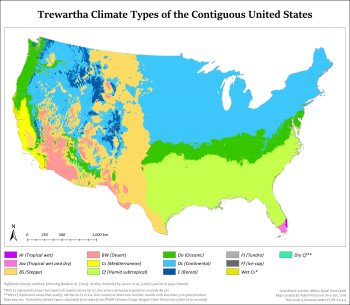 The Trewartha climate classification is a climate classification system first published by American geographer Glenn Thomas Trewartha in 1966. It is a modified version of the Köppen–Geiger system, created to answer some of its deficiencies.[1] The Trewartha system attempts to redefine the middle latitudes to be closer to vegetation zoning and genetic climate systems. It was considered a more true or "real world" reflection of the global climate.[2]

The changes were seen as most effective on the large landmasses in Asia and North America, where many areas fall into a single group (C) in the Köppen–Geiger system.[3] For example, under the standard Köppen system, Washington and Oregon are classed into the same climate zone (Csb) as parts of Southern California, even though the two regions have strikingly different weather and vegetation. Another example was classifying cities like London in the same climate group (C) as Brisbane or New Orleans, despite great differences in seasonal temperatures and native plant life.[4]

This the tropical climate realm, defined the same as in Köppen's scheme (i.e., all 12 months average 18 °C, 64.4 °F, or above). The "A" climates are the realm of the winterless frost-free zone.

BW and BS mean the same as in the Köppen scheme. However, a different formula is used to quantify the aridity threshold: 10(T − 10) + 3P, with T equaling the mean annual temperature in degrees Celsius and P denoting the percentage of total precipitation received in the six high-sun months (April through September in the Northern Hemisphere and October through March in the Southern).[5]

If the precipitation for a given location is less than the above formula, its climate is said to be that of a desert (BW); if it is equal to or greater than the above formula but less than twice that amount, the climate is classified as steppe (BS); and if the precipitation is more than double the value of the formula the climate is not in Group B. Unlike in Köppen's scheme, no thermal subsets exist within this group in Trewartha's, unless the Universal Thermal Scale (see below) is used.

In the Trewartha scheme the "C" climate group encompasses Subtropical climates that have 8 or more months with a mean temperature of 10 °C (50 °F) or higher.

In the Trewartha scheme the "D" climate group encompasses Temperate climates that have 4 to 7 months with a mean temperature of 10 °C (50 °F) or higher.

Most of Europe north of 44th parallel north exhibits Do or Dc climate types.

This represents subarctic and subpolar oceanic climate realms, defined the same as in Köppen's scheme, where 1 to 3 months have an average temperature of 10 °C (50 °F) or above. In this climate zone there is only a short period (normally 50 to 90 days) that is frost free. In the original scheme, this group was not further divided; later, the designations Eo and Ec were created, with Eo (maritime subarctic) signifying that the coldest month averages above −10 °C (14 °F), while Ec (continental subarctic or "boreal") means that at least one month has an average temperature of −10 °C or below. As in Group D, a third letter can be added to indicate seasonality of precipitation. There is no separate counterpart to the Köppen Dfd, Dwd, and Dsd climate types in Trewartha's scheme, but a letter can optionally be added to the end of the symbol to indicate the temperature of the coldest month (see below).

This is the polar climate group, where all months must have a monthly mean air temperature of below 50 °F (10 °C). Polar climates have two subtypes Ft (tundra) and Fi (ice cap):

In the "Ft" climate type, at least one month has an average temperature above 0 °C or 32 °F (but not above 10 °C (50 °F)), so that there is a brief time when the surface might be free of snow or ice and a scrub or Tundra vegetation cover is possible.

In the "Fi" climate type, all months have an average temperature below 0 °C (32 °F), this is the region of the vast deserts of perpetually frozen Ocean in the North Pole, and the permanent ice plateaus of Antarctica and Greenland.

Highland climates are those in which altitude plays a role in determining climate classification.[6] Specifically, this would apply if correcting the average temperature of each month to a sea-level value using the formula of adding 5.6 °C (10.1 °F) for each 1,000 meters (3,300 ft) of elevation would result in the climate fitting into a different thermal group than that into which the actual monthly temperatures place it.

Sometimes G is used instead of H if the above is true and the altitude is between 500 and 2,500 meters (1,600 and 8,200 ft), but the G or H is placed in front of the applicable thermal letter rather than replacing it. The second letter used reflects the corrected monthly temperatures, not the actual monthly temperatures. G stands for glacier for instances.

An option exists to include information on both the warmest and coldest months for every climate by adding a third and fourth letter, respectively. The letters used conform to the following scale: