Province of Treviso Veneto Canada
This article is about the Italian city. For the Brazilian city, see Treviso, Santa Catarina.
Comune in Veneto, Italy

listen); Venetian: Trevixo) is a city and comune in the Veneto region of northern Italy. It is the capital of the province of Treviso and the municipality has 84,669 inhabitants (as of September 2017):.[4] Some 3,000 live within the Venetian walls (le Mura) or in the historical and monumental center; some 80,000 live in the urban center while the city hinterland has a population of approximately 170,000.[citation needed].

Treviso is also known for being the original production area of Prosecco wine and radicchio,[5][6] and is thought to have been the origin of the popular Italian dessert Tiramisù.[7]

Some believe that Treviso derived its name from the Celtic word "tarvos" mixed with the Latin ending "isium" forming "Tarvisium". Others believe it comes from a word from the language of a tribe who first came to Treviso.[8]

Tarvisium, then a city of the Veneti, became a municipium in 89 BC after the Romans added Cisalpine Gaul to their dominions. Citizens were ascribed to the Roman tribe of Claudia. The city lay in proximity of the Via Postumia, which connected Opitergium to Aquileia, two major cities of Roman Venetia during Ancient and early medieval times. Treviso is rarely mentioned by ancient writers, although Pliny writes of the Silis, that is the Sile River, as flowing ex montibus Tarvisanis.[citation needed]

During the Roman period, Christianity spread to Treviso. Tradition records that St. Prosdocimus, a Greek who had been ordained bishop by St. Peter, brought the Catholic faith to Treviso and surrounding areas. By the 4th century, the Christian population grew sufficient to merit a resident bishop. The first documented bishop was John the Pious[9] who began his episcopacy in 396 AD.[citation needed]

Treviso went through a demographic and economic decline similar to the rest of Italy after the fall of the Western Empire; however, it was spared by Attila the Hun, and thus, remained an important center during the 6th century. According to tradition, Treviso was the birthplace of Totila, the leader of Ostrogoths during the Gothic Wars. Immediately after the Gothic Wars, Treviso fell under the Byzantine Exarchate of Ravenna until 568 AD when it was taken by the Lombards, who made it one of 36 ducal seats and established an important mint. The latter was especially important during the reign of the last Lombard king, Desiderius, and continued to churn out coins when northern Italy was annexed to the Frankish Empire. People from the city also played a role in the founding of Venice.[citation needed]

Charlemagne made it the capital of a border march, i.e. the Marca Trevigiana, which lasted for several centuries.[citation needed]

Treviso joined the Lombard League, and gained independence after the Peace of Constance (1183).[10] This lasted until the rise of seignories in northern Italy. In 1214, Treviso was the scene of the Castle of Love that turned into a war between Padua and Venice. Among the various families who ruled over Treviso, the Da Romano reigned from 1237 to 1260. Struggles between Guelph and Ghibelline factions followed, with the first triumphant in 1283 with Gherardo III da Camino, after which Treviso experienced significant economic and cultural growth which continued until 1312. Treviso and its satellite cities, including Castelfranco Veneto (founded by the Trevigiani in contraposition to Padua), had become attractive to neighbouring powers, including the da Carrara and Scaligeri. After the fall of the last Caminesi lord, Rizzardo IV, the Marca was the site of continuous struggles and ravages (1329–1388).

Treviso notary and physician Oliviero Forzetta was an avid collector of antiquities and drawings; the collection was published in a catalog in 1369, the earliest such catalog to survive to this day.[11]

After a Scaliger domination in 1329–1339,[citation needed] the city gave itself to the Republic of Venice,[10] becoming the first notable mainland possession of the Serenissima.[citation needed] From 1318 it was also, for a short time, the seat of a university. Venetian rule brought innumerable benefits; however, Treviso necessarily became involved in the wars of Venice.[citation needed] From 1381–1384, the city was captured and ruled by the duke of Austria, and then by the Carraresi until 1388. Having returned to Venice, the city was fortified and given a massive line of walls and ramparts, still existing; these were renewed in the following century under the direction of Fra Giocondo, two of the gates being built by the Lombardi. The many waterways were exploited with several waterwheels which mainly powered mills for milling grain produced locally.[citation needed] The waterways were all navigable and "barconi" would arrive from Venice at the Port of Treviso (Porto de Fiera) pay duty and offload their merchandise and passengers along Riviera Santa Margherita. Fishermen were able to bring fresh catch every day to the Treviso fish market, which is held still today on an island connected to the rest of the city by two small bridges at either end.[citation needed] 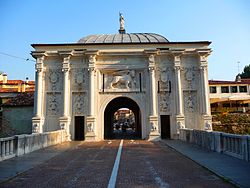 Gate San Tomaso, with the Lion of Saint Mark, emblem of the Venetian Republic

Treviso was taken in 1797 by the French under Mortier, who was made duke of Treviso. French domination lasted until the defeat of Napoleon, after which it passed to the Austro-Hungarian Empire. The citizens, still at heart loyal to the fallen Venetian Republic, were displeased with imperial rule and in March 1848, drove out the Austrian garrison. However, after the town was bombarded, the people were compelled to capitulate in the following 14 June. Austrian rule continued until Treviso was annexed with the rest of Veneto to the Kingdom of Italy in 1866.[12]

During World War I, Treviso held a strategic position close to the Austrian front. Just north, the Battle of Vittorio Veneto helped turn the tide of the War.[citation needed]

During World War II, one of several Italian concentration camps was established for Slovene and Croatian civilians from the Province of Ljubljana in Monigo, near Treviso. The Monigo camp was disbanded with the Italian capitulation in 1943.[citation needed]

The city suffered several bombing raids during World War II.[13] A large part of the medieval structures of the city center were destroyed—including part of the Palazzo dei Trecento, later rebuilt—causing the death of about 1,600 people.[14]

In January 2005, a bomb enclosed in a candy egg and attributed to the so-called Italian Unabomber detonated on a Treviso street.[15] 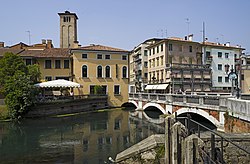 A bridge on the Sile river in Treviso

Climate in Treviso has mild differences between highs and lows, and has adequate rainfall year-round. The Köppen Climate Classification subtype for this climate is "Cfa" (temperate Humid subtropical climate).[16]

Treviso is home to several notable Italian sport teams, thanks to the presence of the Benetton family, who owns and sponsors:

The local football team, A.S.D. Treviso 2009, played for the first time in the Italian Serie A in 2005. Its home stadium is the Omobono Tenni.

Treviso is a popular stop on the professional cyclo-cross racing circuit and served as the site of the 2008 UCI Cyclo-cross World Championships.

Treviso is a popular area for cycling enthusiasts. From the city center there is an cycling path along the Sile river with connecting paths all the way to Jesolo, a seaside resort on the Adriatic sea. For road cyclists, Treviso is also a starting/finishing point for tours to the Montello hill and further into the hills of the area around Conegliano and Valdobbiadene.

MOM is the major transport company in the city and provides for urban and suburban services in the Province of Treviso.

Treviso is twinned with: