Trentino, officially the Autonomous Province of Trento, is an autonomous province of Italy, in the country's far north. The Trentino and South Tyrol constitute the region of Trentino-Alto Adige/Südtirol, an autonomous region under the constitution.[4] The province is composed of 177 comuni (municipalities).[5] Its capital is the city of Trento. The province covers an area of more than 6,000 km2 (2,300 sq mi), with a total population of 541,098 in 2019. Trentino is renowned for its mountains, such as the Dolomites, which are part of the Alps.

The province is generally known as Trentino.[6][7][8][9][10][11][12][13] The name derives from Trento, the capital city of the province. Originally, the term was used by the local population only to refer to the city and its immediate surroundings. Under former Austrian government, which began in the 19th century (previously Trentino was governed by the local bishop), the common German name for the region was Welschtirol (lit. 'Italian Tyrol') or Welschsüdtirol (‘Italian South Tyrol’), or just Südtirol,[14] meaning South Tyrol with reference to its geographic position as the southern part of Tyrol.

The corresponding Italian terms were Tirolo Meridionale, that was historically used to describe the wider southern part of the County of Tyrol, specifically Trentino and sometimes also today's South Tyrol,[15][16][17] or Tirolo Italiano. In its wider sense, Trentino was first used around 1848 in an article by a member of the Frankfurt National Assembly; it became a popular term among leftist intellectual circles in Austria.[18] 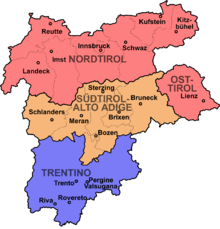 Trentino is part of the Euroregion Tyrol-South Tyrol-Trentino, which corresponds to the historic Tyrol region[20]
Main article: History of Trentino

The history of Trentino begins in the mid-Stone Age. The valleys of what is now Trentino were already inhabited by man, the main settlements being in the valley of the Adige River, thanks to its milder climate.

In the early Middle Ages, this area was included within the Kingdom of Italy and the March of Verona. In 1027, the Bishopric of Trent was established as a State of the Holy Roman Empire by Emperor Conrad II. It was an ecclesiastical territory, roughly corresponding to the present-day Trentino, governed by the Prince-Bishops of Trento.

The Council of Trent, held in three major sessions from 1545 to 1563, with the first at Trento, was one of the important councils in the history of the Roman Catholic Church. It was an articulation of Roman Catholic doctrine in response to the Protestant Reformation, and specified doctrine on salvation, the sacraments, and the Biblical canon.

After the Napoleonic Wars of the early 19th century, the bishopric was secularized and absorbed into the Austrian County of Tyrol. It was governed by the House of Habsburg-Lorraine. The region was the location of heavy fighting during World War I, as it was directly on the front lines between Austria-Hungary and Italy.[21] Trentino was occupied by Italy in November 1918 and was annexed in 1919 by the Kingdom of Italy in the Treaty of Saint-Germain-en-Laye.

After World War II, the Italian and Austrian Foreign Ministers signed the Gruber-De Gasperi Agreement, creating the autonomous region of Trentino-South Tyrol, consisting of the autonomous provinces of Trentino and South Tyrol. Since the treaty, Trentino has enjoyed considerable autonomy from the Italian central government in Rome. It has its own elected government and legislative assembly.

In 1996, the Euroregion Tyrol-South Tyrol-Trentino was formed between the Austrian state of Tyrol and the Italian provinces of South Tyrol and Trentino. The boundaries of the association correspond to the old County of Tyrol. The aim is to promote regional peace, understanding and cooperation in many areas. The region's assemblies meet together as one on various occasions and have set up a common liaison office to the European Union in Brussels. 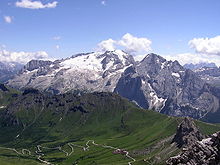 Trentino is a mountainous region. The Adige river flows through the central Trentino in a valley named after the river. The principal towns of Trentino lie in the Adige Valley, which has been a historical passage connecting Italy with Northern Europe. Among other important valleys are Non Valley, known for its apple production, Sole Valley, Giudicarie, which has been historically connected by Trento and Brescia, Fiemme and Fassa, Lagarina, Mocheni, Sugana Valley and many others.

The Marmolada, at 3,343 m (10,968 ft) above sea level, is the highest mountain in the Dolomites. The glacier on the Marmolada is also a landmark. Other high mountains include the Monte Baldo, Carè Alto, Cermis, Crozzon di Brenta, Hintere Eggenspitze, Latemar, Paganella, Piz Boè, Presanella, Punta San Matteo and Vezzana.

The 1972 second Statute of Autonomy for Trentino-Alto Adige/Südtirol devolved most legislative and executive competences from the regional level to the provincial level, creating de facto two separate regions. Administratively, the province enjoys a large degree of autonomy in the following sectors: health, education, welfare and transport infrastructure. The provincial council comprises 35 members, one of whom must by law be drawn from the Ladin minority.

The Ladin community has one reserved seat in the provincial assembly and is thereby guaranteed political representation.

Due to the division of the province into the 217 municipalities (Comuni/Gemeinden), often of small or even tiny size, in the late 1970s, eleven larger units known as districts (comprensori) were introduced. The municipalities forming a district elect the council for that district. However, this tier of government has provoked criticism, and, in 2006, a reform created fifteen more homogenous "Valley Communities" (comunità di valle, Talgemeinden) and one territory including the municipalities of Trento, Cimone, Aldeno and Garniga Terme (see Municipalities of Trentino). 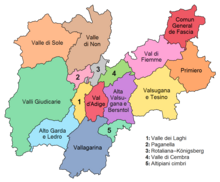 Map of Trentino with its 16 new districts, established in 2006 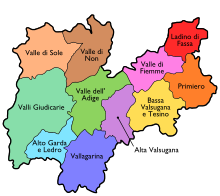 Map of Trentino with its 11 districts, abolished in 2006

As of 2009, the only municipalities with a population over 20,000 were Trento, Rovereto, and Pergine Valsugana. 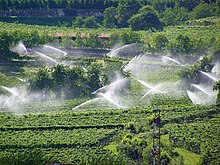 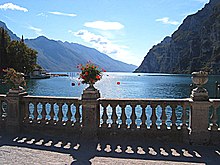 A view of Lake Garda from Riva del Garda in the south. Tourism is one of the primary revenue areas of the Trentine economy.

Despite the overwhelmingly mountainous nature of the territory, agriculture remains important. Farms often join together to form larger cooperatives. The most important produce comprises: apples (50% of national production, together with South Tyrol) and other fruit, vegetables (primarily in the Val di Gresta) and grape; important especially for its quality, the latter is used for the production of dry and sparkling wines.

In January 2008, the Edmund Mach Foundation was established to promote research, training and services in the agricultural, agri-food and environmental fields.

The primary industries, often small and medium-sized, are concentrated in Valsugana, Vallagarina and the Adige Valleys. Sectors include textiles, mechanics, wood and paper productions. Also important is the production of hydro-electric energy. 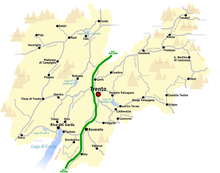 The Trentino province is crossed by the main road and rail connections between Italy and Germany. These include the Brenner A22 motorway and road which passes through the Etsch/Adige Valley. A regional project of switching much of the road traffic to railways is currently under consideration.

The province has two more railways: the Valsugana Line, connecting Trento to Venice and the Trento-Malè-Marilleva railway between Trento and Malè.

In 2019 the population of Trentino was 541,098. The highest concentration of the population is located around the capital city of Trento, and the southern parts. The whole region is divided up into 175 municipalities. The majority of the Trentino population is Italian-speaking with its local dialects.

The region is also home to four other indigenous linguistic minorities, which are Ladin, Lombard, Mócheno and Cimbrian [24]. All languages except Lombard are protected by regional and provincial laws, statutes, and regulations.

After World War II and the devolution of power to regional authorities, a change in policy slowly began, which gained momentum in the 1990s. Since then a number of far-reaching laws and regulations have been passed and implemented, that protect and promote the use of these three languages and the unique cultural heritage and identity. This has for example been extended to school curricula in the regional languages and street signs becoming bilingual. All three minorities have their own cultural institute which were decreed by national law and receive state funds. The purpose of these cultural institutes is to safeguard and promote the respective culture and languages.

The Ladin minority is found in the Fassa Valley, in the municipalities of Canazei (Cianacei), Campitello di Fassa (Ciampedèl), Mazzin (Mazin), Moena, Soraga and Sèn Jan di Fassa. In the census of 2001, 16,462 inhabitants of Trentino declared Ladin as their native language.[25]

Mócheno is still spoken in the municipalities of Frassilongo (Garait), Palù del Fersina (Palai en Bersntol) and Fierozzo (Vlarötz), while the Cimbrian language is spoken in Luserna (Lusérn).[4] The 2001 census found there were 2,276 native Mócheno and 882 Cimbrian speakers.[25] The linguistic breakdown according to the census of 2001 is:[26]

The Nones language hails from the Non Valley and is considered by some[who?] linguists a variant of Ladin.[citation needed] Estimates range up to 30,000 speakers. The Solandro language is also under debate as to whether it is a dialect of Ladin or a separate language. Native speakers are mainly found in the Sole Valley and are estimated to be up to 15,000. Both idioms are alternatively considered as dialects within the range of Gallo-Romance languages. There is no official census to date that has Nones and Solandro as officially distinct languages. The total number of Ladin speakers in the census of 2001 exceeds the population of around 7,500 in the Fassa Valley. A number of Nones and Solandro speakers identified as Ladin speakers, while others chose not to exercise that option due to the disagreement whether or not their languages are Ladin or a separate idiom.

The Trentino is a region of cultural encounters. Already in the past Germans, Italians and Ladins joined in this area. The alpine province is a piece of land, in which mountain passes and elevated plains join hilly valleys and plains and in which different people and cultures join. Its history, but also the relatively insular geographic position of some valleys led to an extraordinary richness in culture and many customs and traditions that have been kept alive up to the present. Also some minority groups and gastronomic peculiarities have been preserved till now.[27]

In the territory of the Province there are numerous museums, which have had significant development over the last twenty years by the financial resources of the Province. Among the main ones:

Also worthy of note are the cultural institutes and museums dedicated to the three minorities of the Province, the Istitut cultural Ladin "majon di fascegn" in Val di Fassa and the "Kulturinstitut Bersntol - Lusérn" for the promotion of German-speaking minorities mòchene and Cimbre.

In the region there are numerous castles. With the financial aid of Province, some of them could be restored and are now open to the public. Here the most important:

2008 Maratona dles Dolomites ascent to Campolongo Pass, with Corvara in the background

The region offers many opportunities for mountain climbing and trekking and winter sports. Important winter events are the world championships organised by the International Ski Federation (FSI) such as the Nordic ski 1991, 2003 and 2013, snowboarding 2001 and freestyle ski championship 2007, as well as the Adamello Ski Raid and Marcialonga. The Tour de Ski has since 2007 had its conclusion in Val di Fiemme with the Final Climb stage up the alpine skiing course on Alpe Cermis.

During the spring and summer, cycling is a big event in the region, such as the Giro del Trentino and Maratona dles Dolomites over the mountain passes. Cross country racing such as the Cross della Vallagarina and the 10-kilometre road running competition Giro al Sas also take place.

Trentino Volley is a professional Italian volleyball team. It plays in the Italian Volleyball League without interruption since 2000, while Aquila Trento is a basketball team in the Italian top league.