Treaty of Trianon Treaty of Versailles Paris Peace Conference (1919–1920)
For other treaties with this name, see Treaty of Saint-Germain-en-Laye.

As a preamble, on 21 October 1918, 208 German-speaking delegates of the Austrian Imperial Council had convened in a "provisional national assembly of German-Austria" at the Lower Austrian Landtag. While the collapse of the Austro-Hungarian Army culminated at the Battle of Vittorio Veneto, the Social Democrat Karl Renner was elected German-Austrian State Chancellor on 30 October. In the course of the Aster Revolution on 31 October, the newly established Hungarian People's Republic under Minister President Mihály Károlyi declared the real union with Austria terminated.

With the Armistice of Villa Giusti on 3 November 1918, the fate of the Austro-Hungarian Monarchy was sealed. On 11 November 1918 Emperor Charles I of Austria officially declared to "relinquish every participation in the administration", one day later the provisional assembly declared German-Austria a democratic republic and part of the German Republic. However, on the territory of the Cisleithanian ("Austrian") half of the former empire, the newly established states of Czechoslovakia, Poland, and the Yugoslav Kingdom of Serbs, Croats and Slovenes (the "successor states") had been proclaimed. Moreover, South Tyrol and Trentino were occupied by Italian forces and Yugoslav troops entered the former Duchy of Carinthia, leading to violent fights.

An Austrian Constitutional Assembly election was held on 16 February 1919. The Assembly re-elected Karl Renner state chancellor and enacted the Habsburg Law concerning the banishment of the House of Lorraine. When Chancellor Renner arrived at Saint-Germain in May 1919, he and the Austrian delegation found themselves excluded from the negotiations led by French Prime Minister Georges Clemenceau. Upon an Allied ultimatum, Renner signed the treaty on 10 September. The Treaty of Trianon in June 1920 between Hungary and the Allies completed the disposition of the former Dual Monarchy.

The treaty declared that the Austro-Hungarian Empire was to be dissolved. According to article 177 Austria, along with the other Central Powers, accepted responsibility for starting the war. The new Republic of Austria, consisting of most of the German-speaking Danubian and Alpine provinces in former Cisleithania, recognized the independence of Hungary, Czechoslovakia, Poland, and the Kingdom of Slovenes, Croats and Serbs. The treaty included 'war reparations' of large sums of money, directed towards the Allies (however the exact amount have never been defined and collected from Austria).

Cisleithanian Austria had to face significant territorial losses, amounting to over 60 percent of the prewar Austrian Empire's territory: 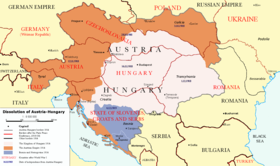 The Allies had explicitly committed themselves to the cause of the minority peoples of Austria-Hungary late in the war. Reflecting this, the Allies not only allowed the minority peoples to help create new states (Czechoslovakia, Yugoslavia), recreate former states (Poland), or join their ethnic brethren in existing nation-states (Romania, Italy), but allowed the successor states to absorb significant blocks of German-inhabited territory. In addition the negotiators on the Allied side, particularly Wilson, did not understand when speaking of self-determination that no convenient line could be drawn to separate intermingled nationalities, and that in further cases, irredentists would claim that some German or Hungarian-inhabited territories had actually been theirs. This was as well rendered by the fact just only a few cases were plebiscites allowed regarding the disputed territories.

Unlike its former Hungarian partner, Austria had never been a nation in the true sense of the word. While the Austrian state had existed in one form or another for over 700 years, it had no unifying force other than loyalty to the Habsburgs. As the Austrian national identity did not exist and develop prior to 1945, people had German national consciousness. Article 88 of the treaty required Austria to refrain from directly or indirectly compromising its independence, which meant that Austria could not enter into political or economic union with the German Reich without the agreement of the council of the League of Nations. Accordingly, the new republic's initial self-chosen name of German-Austria (German: Deutschösterreich) had to be changed to Austria. Many Austrians would come to find this term harsh (especially among the Austrian Germans being a vast majority who would support a single German nation state), due to Austria's later economic weakness, which was caused by loss of land. Because of all these reasons, Austria would later lead to support for the idea of Anschluss (political union) with Nazi Germany.

Conscription was abolished and the Austrian Army was limited to a force of 30,000 volunteers. There were numerous provisions dealing with Danubian navigation, the transfer of railways, and other details involved in the breakup of a great empire into several small independent states.

The vast reduction of population, territory and resources of the new Austria relative to the old empire wreaked havoc on the economy of the old nation, most notably in Vienna, an imperial capital now without an empire to support it. For a time, the country's very unity was called into question.