William I of the Netherlands Belgian Revolution Belgium
Treaty signed on 19 April 1839 over Belgium and Luxembourg
"Scrap of paper" redirects here. For the literal meaning, see Paper recycling. For the silent film, see A Scrap of Paper.

Under the treaty, the European powers recognised and guaranteed the independence and neutrality of Belgium and established the full independence of the German-speaking part of Luxembourg. Article VII required Belgium to remain perpetually neutral, and by implication committed the signatory powers to guard that neutrality in the event of invasion.[2]

Since 1815, Belgium had been a reluctant part of the United Kingdom of the Netherlands.[3] In 1830, Belgians broke away and established an independent Kingdom of Belgium. The overwhelmingly Catholic population could not accept the Dutch king's favouritism toward Protestantism, while French-speakers were irritated by his disdain for the French language, and the middle classes objected to the Dutch monopolisation of public offices.[4] Liberals regarded King William I's rule as despotic, while there were high levels of unemployment and industrial unrest among the working classes.

Small-scale fighting – the death of some 600 volunteers is commemorated in the Place des Martyrs, Brussels[5] - was followed by an international settlement in 1831.[6] However the settlement was not accepted by the Dutch, who invaded the country in the autumn of 1831;[7] and it took a French army recapturing Antwerp in 1832 before Belgium and Holland could even agree an armistice.[8] Several years later, the Netherlands recognised that they stood to gain more territory by accepting the 1831 settlement than from a mere continuance of the armistice.[9] The Belgian government protested, with French support, against the late implementation of the settlement terms, but Britain accepted the Dutch claim; and in 1839, the Dutch accepted Belgian independence (and regained the disputed territories) by the Treaty of London. At the same time, the major powers all guaranteed Belgium's independence.[10][11]

With the treaty, the southern provinces of the Netherlands, independent de facto since 1830, became internationally recognised as the Kingdom of Belgium, while the Province of Limburg was split into Belgian and Dutch parts.

The Grand Duchy of Luxemburg was in a personal union with the Netherlands and simultaneously a member of the German Confederation. The treaty partitioned the grand duchy. It lost two-thirds of its territory to Belgium's new Province of Luxembourg. The partitioning left a rump grand duchy, covering one-third of the original territory and inhabited by one-half of the original population,[12] in personal union with the Netherlands, under King-Grand Duke William I (and subsequently William II and William III). This arrangement was confirmed by the 1867 Treaty of London,[13] known as the 'Second Treaty of London' in reference to the 1839 treaty, and lasted until the death of King-Grand Duke William III 23 November 1890.[14]

The "scrap of paper" 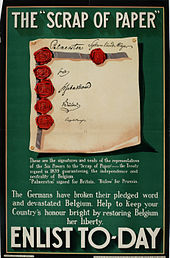 Belgium's de facto independence had been established through nine years of intermittent fighting. The co-signatories of the Treaty of London—Great Britain, Austria, France, the German Confederation (led by Prussia), Russia, and the Netherlands—now officially recognised the independent Kingdom of Belgium, and at Britain's insistence agreed to its neutrality.

The treaty was a fundamental "lawmaking" treaty that became a cornerstone of European international law; it was especially important in the events leading up to World War I.[15] On 31 July 1914 the mobilisation of the Belgian Army was ordered, and the Belgian king at the same time publicly called Europe's attention to the fact that Germany, Great Britain and France were solemnly bound to respect and to defend the neutrality of his country.[16] When the German Empire invaded Belgium in August 1914 in violation of the treaty, the British declared war on 4 August.[17][18] Informed by the British ambassador that Britain would go to war with Germany over the latter's violation of Belgian neutrality, German Chancellor Theobald von Bethmann-Hollweg exclaimed that he could not believe that Britain and Germany would be going to war over a mere "scrap of paper".[19]

The Treaty of London also guaranteed Belgium the right of transit by rail or canal over Dutch territory as an outlet to the German Ruhr. This right was reaffirmed in a 24 May 2005 ruling of the Permanent Court of Arbitration in a dispute between Belgium and the Netherlands on the railway track.[20]

In 2004 Belgium requested a reopening of the Iron Rhine railway. This was the result of the increasing transport of goods between the port of Antwerp and the German Ruhr Area. As part of the European policy of modal shift on the increasing traffic of goods, transport over railway lines and waterways was now preferred over road transport. The Belgian request was based on the treaty of 1839, and the Iron Rhine Treaty of 1873.[21] After a series of failed negotiations, the Belgian and Dutch governments agreed to take the issue to the Permanent Court of Arbitration and respect its ruling in the case.

In a ruling of 24 May 2005, the court acknowledged both the Belgian rights under the cessation treaty of 1839 and the Dutch concerns for part of the Meinweg National Park nature reserve. The 1839 treaty still applied, the court found, giving Belgium the right to use and modernise the Iron Rhine. However, Belgium would be obliged to finance the modernisation of the line, while the Netherlands had to fund the repairs and maintenance of the route. Both countries were to share the costs of a tunnel beneath the nature reserve.[22]