The Treaty of Lausanne (French: Traité de Lausanne) was a peace treaty negotiated during the Lausanne Conference of 1922–23 and signed in the Palais de Rumine,[1][2] Lausanne, Switzerland, on 24 July 1923. It officially settled the conflict that had originally existed between the Ottoman Empire and the Allied French Republic, British Empire, Kingdom of Italy, Empire of Japan, Kingdom of Greece, and the Kingdom of Romania since the onset of World War I.[3] The original text of the treaty is in French.[3] It was the result of a second attempt at peace after the failed Treaty of Sèvres. The earlier treaty had been signed in 1920, but later rejected by the Turkish national movement who fought against its terms. The Treaty of Lausanne ended the conflict and defined the borders of the modern Turkish Republic. In the treaty, Turkey gave up all claims to the remainder of the Ottoman Empire and in return the Allies recognized Turkish sovereignty within its new borders.[3] It provided for the Greek-Turkish population exchange and allowed unrestricted civilian passage through the Turkish Straits (but not military; this would happen with the Montreux Convention). 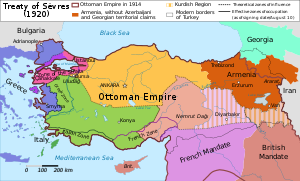 After the withdrawal of the Greek forces in Asia Minor and the expulsion of the Ottoman Sultan by the Turkish army under the command of Mustafa Kemal Atatürk, the Ankara-based Kemalist government of the Turkish National Movement rejected the territorial losses imposed by the 1920 Treaty of Sèvres previously signed by the Ottoman Empire. Britain had sought to undermine Turkish influence in Mesopotamia and Kirkuk by seeking the creation of a Kurdish state in Eastern Anatolia. Secular Kemalist rhetoric relieved some of the international concerns about the future of Armenians who had survived the 1915 Armenian genocide, and support for Kurdish self determination similarly declined. Under the Treaty of Lausanne, signed in 1923, Eastern Anatolia became part of modern-day Turkey, in exchange for Turkey's relinquishing Ottoman-era claims to the oil-rich Arab lands.[7]

Negotiations were undertaken during the Conference of Lausanne. İsmet İnönü was the chief negotiator for Turkey. Lord Curzon, the British Foreign Secretary of that time, was the chief negotiator for the Allies, while Eleftherios Venizelos negotiated on behalf of Greece. The negotiations took many months. On 20 November 1922, the peace conference was opened; the treaty was signed on 24 July after eight months of arduous negotiation, punctuated by several Turkish withdrawals. The Allied delegation included U.S. Admiral Mark L. Bristol, who served as the United States High Commissioner and supported Turkish efforts.[8]

The treaty was composed of 143 articles with major sections including:[9]

The treaty provided for the independence of the Republic of Turkey but also for the protection of the Greek Orthodox Christian minority in Turkey and the Muslim minority in Greece. However, most of the Christian population of Turkey and the Muslim population of Greece had already been deported under the earlier Convention Concerning the Exchange of Greek and Turkish Populations signed by Greece and Turkey. Only the Greek Orthodox of Constantinople, Imbros and Tenedos (about 270,000 at that time),[11] and the Muslim population of Western Thrace (about 129,120 in 1923) were excluded.[12] Article 14 of the treaty granted the islands of Imbros (Gökçeada) and Tenedos (Bozcaada) "special administrative organisation", a right that was revoked by the Turkish government on 17 February 1926. Turkey also formally accepted the loss of Cyprus (which had been leased to the British Empire following the Congress of Berlin in 1878, but de jure remained an Ottoman territory until World War I). Egypt and Anglo-Egyptian Sudan (both of which had been occupied by British forces with the pretext of "putting down the Urabi Revolt and restoring order" in 1882, but de jure remained Ottoman territories until World War I) were given to the British Empire, which had unilaterally annexed them on 5 November 1914.[3] The fate of the province of Mosul was left to be determined through the League of Nations. Turkey also explicitly renounced all claims to the Dodecanese Islands, which Italy had been obliged to return to Turkey according to Article 2 of the Treaty of Ouchy in 1912 following the Italo-Turkish War (1911–1912).[13][14]

Summary of Contents of Treaty 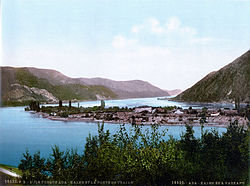 Adakale Island in River Danube was forgotten during the peace talks at the Congress of Berlin in 1878, which allowed it to remain a de jure Turkish territory and the Ottoman Sultan Abdülhamid II's private possession until the Treaty of Lausanne in 1923 (de facto until Romania unilaterally declared its sovereignty on the island in 1919 and further strengthened this claim with the Treaty of Trianon in 1920.)[16] The island was submerged during the construction of the Iron Gates hydroelectric plant in 1970, which also removed the possibility of a potential legal claim by the descendants of Abdul Hamid II.

The treaty delimited the boundaries of Greece, Bulgaria, and Turkey. The major issue of the war reparations, demanded from Greece by Turkey, was abandoned after Greece agreed to cede Karaağaç to Turkey.

Turkey also formally ceded all claims on the Dodecanese Islands (Article 15); Cyprus (Article 20);[17] Egypt and Sudan (Article 17); Syria and Iraq (Article 3); and (along with the Treaty of Ankara) settled the boundaries of the latter two nations.[3]

The territories to the south of Syria and Iraq on the Arabian Peninsula, which still remained under Turkish control when the Armistice of Mudros was signed on 30 October 1918, were not explicitly identified in the text of the treaty. However, the definition of Turkey's southern border in Article 3 also meant that Turkey officially ceded them. These territories included the Mutawakkilite Kingdom of Yemen, Asir and parts of Hejaz like the city of Medina. They were held by Turkish forces until 23 January 1919.[18][19]

By Articles 25 and 26 of the Treaty of Lausanne, Turkey officially ceded Adakale Island in the Danube River to Romania by formally recognizing the related provisions in the Treaty of Trianon of 1920.[3][16] Due to a diplomatic irregularity at the 1878 Congress of Berlin, the island had technically remained part of the Ottoman Empire.

Turkish delegation after having signed the Treaty of Lausanne. The delegation was led by İsmet İnönü (in the middle).

The Treaty of Lausanne led to the international recognition of the sovereignty of the new Republic of Turkey as the successor state of the defunct Ottoman Empire.[3] As result of the Treaty, the Ottoman public debt was divided between Turkey and the countries which emerged from the former Ottoman Empire.[21] The convention on the Straits lasted only thirteen years and was replaced with the Montreux Convention Regarding the Regime of the Straits in 1936. The customs limitations in the treaty were shortly after reworked.

Hatay Province remained a part of the French Mandate of Syria according to the Treaty of Lausanne, but in 1938 gained its independence as the Hatay State, which later joined Turkey after a referendum in 1939. Political amnesty was given to opponents of the new Turkish regime but the government reserved the right to make 150 exceptions.[22] The 150 personae non gratae of Turkey (mostly descendants of the Ottoman dynasty) slowly acquired citizenship – the last one in 1974.[citation needed]