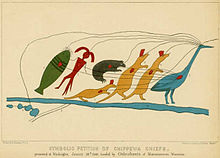 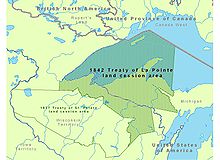 Map showing the 1842 Treaty of La Pointe land cession area of what now is Minnesota's portion of Lake Superior, Wisconsin and Michigan.

The first treaty of La Pointe was signed by Robert Stuart for the United States and representatives of the Ojibwe Bands of Lake Superior and the Mississippi River on October 4, 1842 and proclaimed on March 23, 1843, encoded into the laws of the United States as 7 Stat. 591. By this treaty, the Ojibwa ceded extensive tracts of land that are now parts of the states of Wisconsin and Michigan, specifically the latter's Upper Peninsula.

The Webster-Ashburton Treaty was signed on August 9, 1842, between Great Britain and the United States, officially ending their boundary dispute on what now is the Arrowhead Region of Minnesota, as well as settling other claims. This news did not reach the United States parties to the La Pointe Treaty negotiation. Consequently, the Grand Portage Band, then considered to be in Canadian British territory, was not invited to join the signing of this treaty. It is now considered to occupy territory in the United States.

In 1844, the United States and Grand Portage Band signed the Isle Royale Agreement as an adhesion to this treaty.

As determined subsequently by the United States Supreme Court, the signatory tribes retain hunting, fishing and gathering rights on their former lands in this region. In addition, the Supreme Court held that the treaty obligated the United States to provide reservations for peoples of the signatory bands. For instance, it acquired land in the 1930s for the Bay Mills Indian Community, whose people had historically long been located on Lake Superior in Michigan.

The Ojibwe treaty signatories were:

In Michigan, no boundary adjustments have been made.

In Wisconsin, for regulatory purposes, the southeastern boundaries of the 1842 treaty-area have been adjusted to follow distinct landmarks such as roads and streams. Furthermore, in Wisconsin, with consent of the property-owner and with tribally issued license, all treaty rights of hunting, fishing and gathering may be exercised by the members of the signatory bands.

In Minnesota, no boundary adjustments have been made. The Minnesota Department of Natural Resources have been mainly concerned over hunting regulations as related to this treaty. Minnesota does not acknowledge the 1842 land cession area as giving the tribes privilege over Minnesota's own claim over Lake Superior. Minnesota Department of Natural Resources approved an extension of the 1854 Treaty of La Pointe tribal fishing rights for the Grand Portage Band over a portion of the state's Lake Superior claims.

Map showing the 1844 Webster-Ashburton Treaty area of what now is Minnesota, the 1842 Treaty of La Pointe area, and their overlap over Isle Royale, which precipitated the need for the Isle Royale Agreement.

The Isle Royale Agreement is an adhesion to the 1842 Treaty of La Pointe, conducted at La Pointe, Wisconsin Territory on August 20, 1844. Commissioner Robert Stuart again represented the United States. The Grand Portage Band was using the resources on Isle Royale and believed it and they were in British territory. After boundary clarification was settled via the Webster Ashburton Treaty of 1842, the Grand Portage Band signed the Isle Royale Agreement with the United States as a treaty adhesion. The 1842 treaty signatories re-affirmed their treaty.

‡ Name given in Dakota

The second treaty of La Pointe was signed by Henry C. Gilbert and David B. Herriman for the United States and representatives of the Ojibwe of Lake Superior and the Mississippi on September 30, 1854, proclaimed on January 29, 1855, and codified as 10 Stat. 1109. The treaty ceded all of the Lake Superior Ojibwe lands to the United States in the Arrowhead Region of Northeastern Minnesota, in exchange for reservations for the Lake Superior Ojibwe in Wisconsin, Michigan, and Minnesota. The signatory tribes retain hunting, fishing and gathering right within this region. The portions left unceded were given claims to the Mississippi Ojibwe. The Indian reservations established under this treaty are:

along with general land grants to the Metis.

The Ojibwe treaty signatories were: