The Treaty of Kars (Turkish: Kars Antlaşması, Russian: Карсский договор, tr. Karskii dogovor, Georgian: ყარსის ხელშეკრულება, Armenian: Կարսի պայմանագիր, Azerbaijani: Qars müqaviləsi) was a peace treaty that established the borders between Turkey and the three Transcaucasian republics of the Soviet Union, which are now the independent republics of Armenia, Georgia and Azerbaijan.[3][4] The treaty was signed in the city of Kars on 13 October 1921.[1][2]

Signatories of the Treaty of Kars included representatives from the Grand National Assembly of Turkey, which would declare the Republic of Turkey in 1923, and from the Armenian, Azerbaijani and Georgian Socialist Soviet Republics with the participation of the Russian Soviet Federative Socialist Republic. The last four parties would become constituent parts of the Soviet Union after the victory of the Bolsheviks in the Russian Civil War and the December 1922 Union Treaty.[1][2]

The treaty was the successor treaty to the March 1921 Treaty of Moscow. Most of the territories ceded to Turkey in the treaty were acquired by Imperial Russia from the Ottoman Empire during the Russo-Turkish War of 1877–1878.[5] The only exception was the Surmali region, which had been part of the Erivan Khanate of Iran before it was annexed by Russia in the Treaty of Turkmenchay after the Russo-Persian War of 1826–28.[6]

The Treaty of Kars reaffirmed the terms of the earlier Treaty of Moscow concluded in 1921 between the Grand National Assembly of Turkey and Soviet Russia. It defined the boundaries between the new Turkish Republic and all three Transcaucasian republics.

The treaty provided for the territory of the former Imperial Russian Batum Oblast to be divided. The southern half of the former oblast, largely corresponding to the Artvin Okrug with the city of Artvin, would be annexed to Turkey.[3] The northern half, largely corresponding to the Batum Okrug with the strategic port city of Batum, would become part of Soviet Georgia as the Adjar ASSR (now Adjara).[3] The treaty required the region to be granted political autonomy because of the largely-Muslim local population and for it to implement "an agrarian system in conformity with its own wishes".[2] Caucasus scholar Charles King referred to that part of the treaty as a "rare instance in international law in which the internal administrative structure of one country has been secured by a treaty with another".[4] Additionally, the treaty guaranteed "free transit through the port of Batum for commodities and all materials destined for, or originating in, Turkey, without customs duties and charges, and with the right for Turkey to utilize the port of Batum without special charges".[2]

The treaty created a new boundary between Turkey and Soviet Armenia, defined by the Akhurian (Arpachay) and Aras Rivers. Turkey obtained the territory of the former Kars Oblast of the Russian Empire, including the cities of Kars, Ardahan, and Olti, Lake Childir and the ruins of Ani.[1] From the former Erivan Governorate, it also obtained the Surmalinsky Uyezd (Surmali), with Mount Ararat, the salt mines of Kulp (Tuzluca), and the city of Igdyr, as well as the Aras corridor, a narrow strip of land between the Aras and Lower Karasu Rivers that had been part of the Erivansky Uyezd.[7]

According to the memoirs of Simon Vratsian, the last prime minister of the First Armenian Republic, the Bolsheviks attempted to renegotiate the status of Ani and Kulp and to retain them as part of Soviet Armenia. Ganetsky emphasised the "great historical and scientific value" of Ani for the Armenians and declared Kulp to be an "inseparable part of Transcaucasia".[8] However, Turkey refused to renegotiate the terms agreed upon in the Treaty of Moscow, much to the disappointment of the Soviets.[8] Most of the Armenian territories ceded to Turkey had already been under Turkish military control since the Turkish–Armenian War.[9] The treaty required Turkish troops to withdraw from an area roughly corresponding to the western half of Armenia's present-day Shirak Province, including the city of Aleksandropol (Gyumri).[1]

Article V of the treaty established the region of Nakhichevan as an autonomous exclave under the political jurisdiction (protectorate) of Soviet Azerbaijan. The new autonomous Nakhichevan territory comprised the former Nakhichevansky Uyezd, the Sharur part of the Sharur-Daralagezsky Uyezd and the southernmost parts of the Erivansky Uyezd of the former Erivan Governorate.[9] In 1924, the area was officially declared as the Nakhichevan ASSR subordinate to the Azerbaijan SSR.[10] The creation of the new autonomous republic allowed Azerbaijan to share a 15 km boundary with the Aras corridor, which was now controlled by Turkey.[11] In 1991, the newly-independent Azerbaijan declared itself the successor of the Democratic Republic of Azerbaijan (1918-1920), not the Azerbaijan SSR (under the protectorate of which Nakhichevan was transferred by the Treaty of Kars). 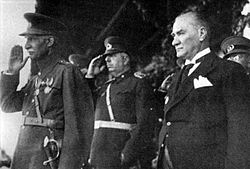 The Kars treaty also impacted Turkish-Iranian relations. The annexation of Surmali and the Aras corridor now gave Turkey a slightly more extensive border with Iran. In the late 1920s, the Ararat rebellion erupted in the vicinity of Mount Ararat. As Turkey attempted to quash the rebellion, the Kurdish rebels fled across the Iranian border to the eastern flank of Lesser Ararat, which they used "as a haven against the state in their uprising".[12] In response, Turkey crossed the border with Iran and occupied the region.[13] The Lesser Ararat area became the subject of discussion between Turkish and Iranian diplomats in border delineation talks. In Tehran in 1932, Iran agreed to cede the area to Turkey in exchange for some territories further south.[14]

However, the agreement was delayed by objections from some Iranian diplomats, who viewed the Lesser Ararat area as strategically important and questioned the validity of the Treaty of Kars.[15] The diplomats felt that Turkey did not have a legitimate claim to the territory of Surmali, which had been part of Iran before it was ceded to Imperial Russia by the Treaty of Turkmenchay.[15] In addition, because the wording of the Turkmenchay Treaty was vague, they advocated annexing parts of the area.[15] After a constructive meeting with Mustafa Kemal Atatürk in Ankara in 1934, Reza Shah, who initially wanted to annex the Aras corridor, finally ordered his diplomats to drop any objections and to accept the new border agreements.[16]

After World War II, the Soviet Union attempted to annul the treaty and to regain its lost territory. According to Nikita Khrushchev, Deputy Premier Lavrentiy Beria goaded his fellow Georgian Joseph Stalin into taking action on the issue, insisting on the return of historical Georgian territories.[17][18] Stalin eventually agreed, and on 7 June 1945, Soviet Foreign Minister Vyacheslav Molotov informed the Turkish ambassador in Moscow that the provinces of Kars, Ardahan and Artvin should be returned to Soviet Union in the name of both the Georgian and the Armenian Socialist Soviet Republics.[18][19] Ankara found itself in a difficult position since it wanted good relations with Moscow but refused to give up the territories. Turkey was in no condition to fight a war with the Soviet Union, which had emerged as a superpower after the Second World War.[18] Soviet territorial claims to Turkey were supported by the Armenian Catholicos George VI and by all shades of the Armenian diaspora, including the anti-Soviet Armenian Revolutionary Federation.[18] The Soviet government also encouraged Armenians abroad to repatriate to Soviet Armenia to support its claims.[19][20]

The British and the Americans opposed the Soviet territorial claims against Turkey. As the Cold War began, the American government saw the claims as part of an "expansionist drive by a Communist empire" and viewed them as reminiscent of Nazi irredentist designs over the Sudetenland in Czechoslovakia.[18] The US State Department was concerned about the strategic military significance of the Kars Plateau to the Soviets.[21] They concluded that their earlier support for Armenia since President Woodrow Wilson (1913-1921) had expired since the loss of Armenian independence.[21] The Soviet Union also requested a revision of the Montreux Convention and a military base on the Turkish Straits.[19] The State Department advised US President Harry Truman to support Turkey and to oppose the Soviet demands, which he did. Turkey joined the anti-Soviet NATO military alliance in 1952.[21]

Following the death of Stalin in 1953, the Soviet government renounced its territorial claims on Turkey as part of an effort to promote friendly relations with the Middle Eastern country and its alliance partner, the United States.[20] The Soviet Union continued to honor the terms of the treaty until its dissolution in 1991. However, according to Christopher J. Walker, Moscow revisited the treaty in 1968, when it attempted to negotiate a border adjustment with Turkey in which the ruins of Ani would be transferred to Soviet Armenia in exchange for two Azerbaijani villages in the area of Mount Akbaba. However, according to Walker, nothing resulted from these talks.[22]

After the dissolution of the Soviet Union, the post-Soviet governments of Russia, Georgia and Azerbaijan accepted the Treaty of Kars. Armenia's position is different because of the absence of diplomatic relations between Turkey and Armenia. In December 2006, Armenian Foreign Minister Vartan Oskanian said that Armenia accepts the treaty as the legal successor to the Armenian SSR but noted that Turkey did not adhere to the terms of the treaty.[23] Specifically, Article XVII of the treaty called for the "free transit of persons and commodities without any hindrance" among the signatories and that the parties would take "all the measures necessary to maintain and develop as quickly as possible railway, telegraphic, and other communications".[2] However, tension between Armenia and Azerbaijan over Nagorno-Karabakh made Turkey close its land border with Armenia and sever diplomatic ties with it, thus violating that article. Oskanian stated that by the action, Turkey was putting the validity of the treaty into doubt.[23]

The Treaty of Kars is overtly rejected by the Armenian Revolutionary Federation, which specifically condemns the treaty as a "gross violation of international law" and argues that because the three Transcaucasian Republics were under the control of Moscow in 1921, their independent consent was questionable.[24] The ARF also questions the validity of the treaty based on the authorities of the sides that concluded it. They contend that the Grand National Assembly of Turkey had no legal authority to sign international treaties.[24] In addition, they argue that because the Soviet Union was not founded until 1922, it was not a recognized state and so also was "not a subject of international law and, naturally, its government had no authority to enter into international treaties."[24]

Following the shootdown of the Russian Sukhoi Su-24 over the Syria–Turkey border in November 2015 and the rise of Russo-Turkish tensions, members of the Communist Party of Russia proposed annulling the Treaty of Moscow and, by extension, the Treaty of Kars.[25][26] Initially, the Russian Foreign Ministry considered that action to send a political message to the government of Turkish President Recep Tayyip Erdoğan.[25] However, Moscow ultimately decided against it in its effort to de-escalate tensions with Ankara.[27]