The Treaty of Fes (Arabic: معاهدة فاس‎, French: Traité de Fès, officially the Treaty Concluded Between France and Morocco on March 30, 1912, for the Organization of the French Protectorate in the Sherifien Empire Traité conclu entre la France et le Maroc le 30 mars 1912, pour l'organisation du protectorat français dans l'Empire chérifien),[2] was a treaty signed by Sultan Abd al-Hafid of Morocco under duress and French diplomat Eugène Regnault [fr] on 30 March 1912. It established the French protectorate in Morocco, and remained in effect until the Franco-Moroccan Joint Declaration of March 2, 1956.[2][3]

The treaty gave France the right to occupy certain parts of the country with the pretext of protecting the Sultan from internal opposition, and to hold actual reins of power while preserving the mask of indirect rule consisted of the Sultan and the Sharifian government. Under the terms, the French Resident-General held absolute powers in external as well as internal affairs, and was the only one capable of representing Morocco in foreign countries. The Sultan however, retained the right to sign the decrees (dahirs), which were submitted by the Resident-Generals.[4]

When news of the treaty finally leaked to the Moroccan populace, it was met with immediate and violent backlash in the Intifada of Fes.[5]

Weakened by defeat in the Franco-Moroccan War, Morocco signed the Anglo-Moroccan Treaty of 1856, which broke the Moroccan state's monopoly on customs revenue—a vital source of income for the Makhzen.[6] The Treaty of Wad Ras following the Hispano-Moroccan War (1859–60) forced Morocco to take a massive British loan—larger than its national reserves—in order to pay off a massive war indemnity to Spain, putting the Makhzen further in debt.[6]

European presence in Morocco—in the form of advisors, doctors, businessmen, adventurers, and even missionaries—dramatically increased after the Madrid Conference of 1880, which was held at the behest of Sultan Hassan I in response to France and Spain's abuse of the protégé system.[6] More than half of the Makhzen's expenditures went abroad to pay war indemnities and buy weapons, military equipment, and manufactured goods.[6] 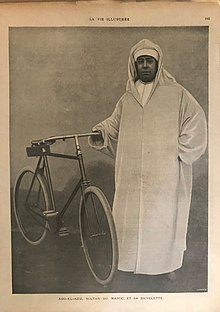 Sultan Abd-el-Aziz with his bicycle in 1901. The young sultan was noted for his capricious spending habits, which exacerbated a major trade deficit.[7]

From 1902 to 1909, Morocco's trade deficit increased 14 million francs annually, and the Moroccan rial depreciated 25% from 1896 to 1906.[6] Morocco became bridled under loans and debts to balance its budget.[6] The first of these came in December 1901—7.5 million francs borrowed from French banks 6% interest.[6] This was followed by British and Belgian loans.[6] Abdelaziz tried to impose a tartib (ترتيب) a flat tax universally hated that failed by 1903.[6] In June 1904, France bailed out the Makhzen with 62.5 million franks, guaranteed by a portion of customs revenue.[6]

The Moroccan historian Abdallah Laroui noted: "The more those at the top borrowed, the more those at the bottom were impoverished."[8] Morocco experienced a famine from 1903 to 1907, as well as insurrections led by El-Rogui (Bou Hmara) and Mulai Ahmed er Raisuni.[6] Abd al-Hafid wrested the throne from his brother Abd al-Aziz in the Hafidiya (1907-1908) coup d'état.[9]

Private agreements among the United Kingdom, Italy, and France in 1904, collectively known as the Entente Cordiale, made without consulting the sultan, had divided the Maghreb into spheres of influence, with France given Morocco. The 1906 Treaty of Algeciras formalized French preëminence over other European powers in Morocco,[7] and affirmed its right to collect customs revenue from Moroccan ports.[10]

In the aftermath of the Agadir Crisis of 1911, Germany recognized the French position in Morocco,[7] receiving in return territories in the French Equatorial African colony of Middle Congo (now the Republic of the Congo). This land, known as Neukamerun, became part of the German colony of Kamerun, part of German West Africa, although it lasted only briefly until it was captured by the Allies in World War I. As part of the treaty, Germany ceded France a small area of territory to the south-east of Fort Lamy, now part of Chad.

In Morocco, the young Sultan Abdelaziz acceded in 1894 at the age of sixteen, and Europeans became the main advisers at the court, while local rulers became more and more independent from the sultan. Sultan Abdelaziz was deposed in 1908. Moroccan law and order continued to deteriorate under his successor, Abdelhafid, who abdicated in favor of his brother Yusef after signing the Treaty of Fez.

Makhzen officials believed the protectorate system in Morocco would resemble British Egypt, with substantial autonomy in domains such as internal administration and justice.[11] However, the Treaty of Fes was modeled after the Treaty of Bardo of May 12, 1881, which made Tunisia a French protectorate, and which severely limited the Bey's authority.[11]

An interim government led by Abdelhafid's brother, Ziin al-'Aabidiin [ar], who was promoted sultan in Meknes on April 17, 1911, also put pressure on Abdelhafid.[12][13]

Eugène Regnault, "the fortunate negotiator," on the front page of Le Matin the day after the signature of the Treaty of Fes.

Eugène Regnault, ministre plénipotentiaire of France in Tangier, arrived in Fes on March 24 after long meetings in Paris with the Treaty of Fes in his possession.[14]

In March 1912, negotiations at the Royal Palace in Fes between Sultan Abd al-Hafid of Morocco and Eugène Regnault [2] were interpreted by Abdelqader Benghabrit, who was then working as the translator at the French Legation in Tangier.[15] The negotiations on March 29, held with the French military surrounding the city,[2] lasted for 6 hours from 6:00 pm until midnight,[2] and they culminated in the signing of the Treaty of Fes, which established the French Protectorate in Morocco on March 30.[2] 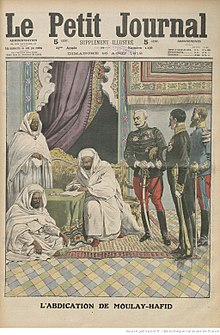 An illustration of Abd al-Hafid signing the Treaty of Fes on the front page of Le Petit Journal's weekly Supplément illustré, printed August 25, 1912.

France gained authority over non-Moroccan citizens in legislative, military, foreign policy and jurisdictional transactions, though nominally leaving the Moroccan government in control of its own citizens. Moroccan nationalists dispute this, noting that France still influenced Moroccan affairs as a result of the treaty.[16]

The Treaty Between France and Spain Regarding Morocco, concluded November 27, 1912, established the Spanish protectorate in Morocco.[6] By this agreement, Spain gained a zone of influence in the Rif and the Cape Juby areas, where the Sultan remained nominally the sovereign and was represented by a vice regent under the control of the Spanish high commission.[17] The treaty also granted the concession for exploitation of the iron mines of Mount Uixan to the Spanish Rif Mines Company, which was also given permission to build a railroad to connect the mines with Melilla.

The treaty was perceived as a betrayal by Moroccan nationalists and led to the 1912 Fez riots and the War of the Rif (1919–26) between the Spanish and the Moroccan Riffians and the Jebala tribes. Their leader was Abd el-Krim, who, after driving back the Spanish, founded a short-lived state, the Republic of the Rif.