A transverse engine is an engine mounted in a vehicle so that the engine's crankshaft axis is perpendicular to the direction of travel. Many modern front wheel drive vehicles use this engine mounting configuration. Most rear wheel drive vehicles use a longitudinal engine configuration, where the engine's crankshaft axis is parallel with the direction of travel, except for some rear-mid engine vehicles, which use a transverse engine and transaxle mounted in the rear instead of the front. Despite typically being used in light vehicles, it is not restricted to light vehicles and has also been used on armored vehicles to save interior space. 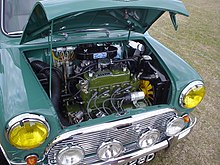 The first successful transverse-engine cars were the two-cylinder DKW "Front" series of cars, which first appeared in 1931.[citation needed] During WWII transverse engines were developed for armored vehicles, with the Soviet T-44 and T-54/T-55 being equipped with transverse engines to save space in the hull. The T-54/55 eventually became the most produced tank in history.

After the Second World War, SAAB used the configuration in their first model, the Saab 92, in 1947.[3] The arrangement was also used for Borgward's Goliath and Hansa brand cars and in a few other German cars. However, it was with Alec Issigonis's Mini, introduced by the British Motor Corporation in 1959, that the design gained acclaim. Issigonis incorporated the car's gearbox into the engine's sump, producing a drivetrain unit narrow enough to install transversely in a car only four feet (1.2 metres) wide. While previous DKW and Saab cars used small two-stroke air-cooled engines with poor refinement and performance the gearbox-in-sump arrangement meant that an 848cc four-cylinder water-cooled engine could be fitted to the Mini, providing strong performance for a car of its size. Coupled to the much greater interior space afforded by the layout (the entire drivetrain only took up 20 per cent of the car's length) this made the Mini a genuine alternative to the conventional small family car.

This design reached its ultimate extent starting with Dante Giacosa's elaboration of it for Fiat. He connected the engine to its gearbox by a shaft and set the differential off-center so that it could be connected to the gearbox more easily. The axleshafts from the differential to the wheels therefore differed in length, which would have made the car's steering asymmetrical were it not for their torsional stiffness being made the same. Giacosa's lay-out was first used in the Autobianchi Primula in 1964 and later in the wide-selling Fiat 128. With the gearbox mounted separately to the engine these cars were by necessity larger than the Mini but this proved to be no disadvantage. The Giacosa lay-out also provided superior refinement, easier repair and was better-suited to adopting five-speed transmissions than the original Issigonis in-sump design. Now most small and small/medium-sized cars built throughout the world use this arrangement.[citation needed]

The Land Rover LR2 Freelander, along with all Volvo models from 1998 on (including V8 models), employ a transversely-mounted engine in order to increase passenger space inside the vehicle. This has also allowed for improved safety in a frontal impact, due to more front to back engine compartment space being created. The result is a larger front crumple zone.[4][5]

Transverse engines have also been widely used in buses. In the United States they were offered in the early 1930s by Twin Coach and used with limited success in Dwight Austin's Pickwick Nite-Coach. Transverse bus engines first appeared widely in the Yellow Coach 719, using Dwight Austin's V-drive; they continued in common use until the 1990s, though shorter V-configuration engines in a straight in "T-drive" configuration became common in the 1960s. They were also used in the British Leyland Atlantean and in many transit buses and nearly all modern double decker buses. They have also been widely used by Scania,[6] MAN, Volvo and Renault's bus divisions.

Engines may be placed in two main positions within the motor car:

Space allowed for engines within the front wheel wells is commonly limited to the following: 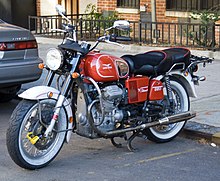 The engine in this Moto Guzzi motorcycle is described as "transverse" even though the crankshaft is in line with the frame.

The description of the orientation of V-twin and flat-twin motorcycle engines sometimes differs from the convention as stated above. Motorcycles with a V-twin engine mounted with its crankshaft mounted in line with the frame, e.g. the AJS S3 V-twin, Indian 841, Victoria Bergmeister, Honda CX series and several Moto Guzzis since the 1960s, are said to have "transverse" engines,[7][8] while motorcycles with a V-twin mounted with its crankshaft mounted perpendicular to the frame, e.g. most Ducatis since the 1970s and most Harley-Davidsons, are said to have "longitudinal" engines.[7][9] This convention uses the longest horizontal dimension (length or width) of the engine as its axis instead of the line of the crankshaft.