The transportation system in Vatican City, a country 1.05 km (0.65 mi) long and 0.85 km (0.53 mi) wide,[1] is a small transportation system with no airports or highways. There is no public transport in the country. A heliport and a short railway is used for special occasions only. Most visitors will walk from a nearby Italian bus or train stop, or car parking. Given an average walking speed of 3.6 km/h (2.2 mph),[2] Vatican City can be crossed in 20 minutes or less. Thus, much of the infrastructure in the Vatican consists of St. Peter's Square itself, hallways and aisles in the basilica and surrounding buildings, and walkways behind and between the buildings.[1] The Vatican City Heliport is in the western corner of the city-state, and is used only for officials of the Holy See and official visitors.[3] 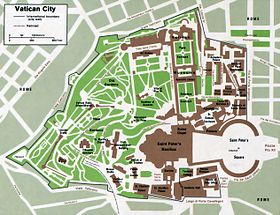 Vatican City is served by Vatican City Heliport, sometimes used by official visitors. There is no public airport and visitors may use the two airports of Rome: Ciampino and Fiumicino.

There is a short, 852-metre (2,795 ft), 1,435 mm (4 ft 8 1⁄2 in) standard gauge railway that connects to surrounding Italy's network at the Saint Peter's station in the capital of Rome. Vatican City railway station was designed by architect Giuseppe Momo and was constructed during the reign of Pope Pius XI after the conclusion of the Lateran Treaties, opening in 1933. The railway was originally planned to transport pilgrims, but in the event has rarely transported passengers. Pope John XXIII was the first to travel on it, and Pope John Paul II was known to have used it, but rarely. The railway is mainly used to transport freight.

Rome Metro line A passes the Vatican at Ottaviano and Cipro-Musei Vaticani metro stations. Both stops are a ten-minute walk away from the city-state.[4]

Pope Francis, who called for a more frugal lifestyle for the Catholic clergy in general,[6] downgraded the Papal vehicles (reminiscent of his preference for public transport as Archbishop).[7] He drives himself inside the Vatican in a small 1984 Renault 4[8] in lieu of the bulletproof popemobile.[9][10]