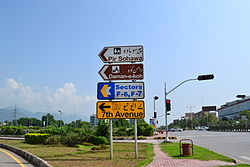 Islamabad is connected to major destinations around the world through Benazir Bhutto International Airport, previously known as Islamabad International Airport.[1] The airport is the third largest in Pakistan and is located outside Islamabad, in Chaklala, Rawalpindi.[2] In fiscal year 2004–2005, over 2.88 million passengers used Benazir Bhutto International Airport and 23,436 aircraft movements were registered.[3] Gandhara International Airport is under construction at Fateh Jang to cope with the increasing number of passengers. When completed in August 2017, the airport will be the largest in Pakistan. The airport will be built at a cost of $400 million and will be completed by mid-2017. This will be the first green field airport in Pakistan with an area of 3,600-acre (15 km2).[4] All major cities and towns are accessible through regular trains and bus services running mostly from the neighbouring city of Rawalpindi. Lahore and Peshawar are linked to Islamabad through a network of motorways which has resulted in a significant reduction in travelling times between these cities. M-2 Motorway is 367 km long and connect Islamabad and Lahore.[5] M-1 Motorway connects Islamabad with Peshawar and is 155 km long.[5] Islamabad is linked to its 'Father' city Rawalpindi through the Faizabad Interchange, the first cloverleaf interchange in Pakistan with a daily traffic volume of about 48,000 vehicles.[6]

Rawalpindi-Islamabad Metrobus near The Centaurus.

People use private transport like Taxi, Careem and Uber for their local journey. In March, 2016 Careem become functional Islamabad and Rawalpindi with an exciting services of Taxi.