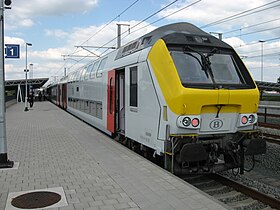 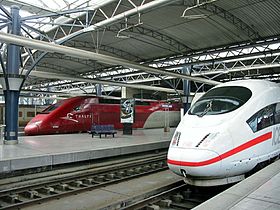 Rail transport in Belgium was historically managed by the National Railway Company of Belgium, known as SNCB in French and NMBS in Dutch. In 2005, the public company was split into 2 companies: Infrabel, which manages the rail network and SNCB/NMBS itself, which manages the freight and passenger services. There is a total of 3,536 kilometres (2,197 mi), (2,563 km (1,593 mi) double track (as of 1998)), of which 2,950 km (1,833 mi) are electrified, mainly at 3,000 volts DC but with 351 km (218 mi) at 25 kV 50 Hz AC (2004) and all on standard gauge of 1,435 mm (4 ft 8 1⁄2 in). In 2004 the National Railway Company of Belgium, carried 178.4 million passengers a total of 8,676 million passenger-kilometres. Due to the high population density, operations are relatively profitable, so tickets are cheap and the frequency of services is high. The SNCB/NMBS is continually updating its rolling stock.[citation needed]

The network currently includes four high speed lines, three operating up to 300 km/h (186 mph), and one up to 260 km/h (162 mph). HSL 1 runs from just south of Brussels to the French border, where it continues to Lille, and from there to Paris or London. HSL 2 runs from Leuven to Liège. HSL 3 continues this route from Liège to the German border near Aachen. HSL 4 runs from Antwerp to Rotterdam by meeting HSL-Zuid at the border with Netherlands.

Electrification is at 3 kV DC, with the exception of the new high-speed lines, and of two recently electrified lines in the south of the country which are at 25 kV AC. Trains, contrary to tram and road traffic, run on the left.

In Belgium an extensive system of tram-like local railways called vicinal or buurtspoor lines crossed the country in the first half of the 20th century, and had a greater route length than the main-line railway system. The only survivors of the vicinal/buurtspoor system are the Kusttram (covering almost the entire coast from France to the Netherlands, being the longest tram line in the world) and some sections of the Charleroi Pre-metro. Urban tram networks exist in Antwerp (the Antwerp Pre-metro), Ghent and Brussels (the Brussels trams), and are gradually being extended. The only rapid transit system in Belgium is the Brussels Metro. Some heavy metro infrastructures were built in Brussels, Antwerp and the Charleroi area, but these are currently used by light rail vehicles, and their conversion to full metro is not envisaged at present due to lack of funds. 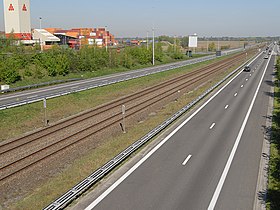 The A12 with a railway in the centre.

The road network in Belgium is managed by regional authorities, meaning that a road section in Flanders is managed by the Flemish Government, a road section in Brussels by the Brussels government and a road section in Wallonia by the Walloon Government. This explains that road signs in Flanders are written in Dutch, even when referring to a Walloon region, and conversely, which can be confusing for foreigners who do not know the different translations of Flemish or Walloon cities in the other language. The road network in Belgium is made of highways, national (or regional) roads (the secondary network) and communal roads (or streets). Communal roads are managed at the municipal level. There are also a number of orbital roads in Belgium around major cities.

Belgian road numbering evolved during the middle decades of the twentieth century, in a relatively inconsistent way. Road number allocations became less systematic during the surge in road building that took place in the 1960s and 70s. Frequently downgraded and deteriorating older national roads retained two digit numbers while newer major roads were identified with less instantly memorable three digit numbers, if only because the shorter numbers were already taken. 1985 saw a comprehensive renumbering of the "N" (National) roads which now followed the scheme described below.[3]

The highways in Belgium are marked with a letter A and a number. Most often however the European numbering system for the international E-road network is used. There is however not always a one-on-one relationship between the two numbering systems along the whole length of the highways.

The ringways (or orbital roads) around bigger cities have their own series of numbers. The names start with a R then a first digit indicating the (old) province, and sometimes a second digit to further differentiate in between different ringways.

Some major examples are:

The national roads were renumbered in 1985 according to a national scheme and are identified with the letter N followed by a number.

The principal national roads fan out from Brussels, numbered in clockwise order:

National roads have an N plus 1, 2 or 3 digits. National roads numbered with 3 digits are provincial roads, their first number indicating the province in which the road begins:

Between 1993 and 2012 the average age of the passengers cars registered as running in Belgium increased from just over 6 years and 4 months to 8 years and 17 days.[4] 2012 data for other European countries are not yet available, but in 2010 the average age of car Belgium was 7.9 years against a European Union average of 8.3 years. Government policy provides an important clue as to one reason for the relative newness of the national car parc. Despite recent high-profile plant closures by Ford and Renault, Belgium remains an important centre for automobile component and passenger car production, with important plants operated by Volvo and Audi, and this is reflected in a relatively benign taxation environment whereby company cars are a still a popular and relatively tax efficient element in many remuneration packages.[5] 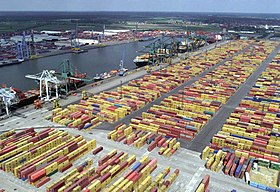 The Belgian waterway network has 2,043 km, 1,532 km of which in regular commercial use.[6] The main waterways are the Albert Canal connecting Antwerp to Liège, the Ghent–Terneuzen Canal through the port of Ghent connecting Ghent with the Westerschelde, the Boudewijn Canal through the port of Bruges-Zeebrugge connecting Bruges with the North Sea, the Brussels-Charleroi Canal, Brussels–Scheldt Maritime Canal and Scheldt connecting Charleroi to Antwerp, the Nimy-Blaton-Péronnes Canal and Scheldt connecting the Borinage to Antwerp, the connection between the North Sea and Antwerp and the connection between Dunkerque and Liège via the Nimy-Blaton-Péronnes Canal, the Canal du Centre, the lower Sambre and the Meuse. Waterways are managed on a regional level in Belgium. The region of Brussels only managed 14 km of waterways from the Anderlecht lock to the Vilvoorde bridge. In Flanders, the management of waterways is outsourced to 4 companies: NV De Scheepvaart, Département Mobiliteit en Openbare Werken, Agentschap voor Maritieme Dienstverlening en Kust and Waterwegen en Zeekanaal NV.

Brussels Airport is the main airport in Belgium.

According to the 2009 CIA World Factbook, there are a total of 43 airports in Belgium, 27 of which have paved runways. Airplane passengers in Belgium can use 5 airports, the largest of which being the Brussels Airport. The other airports are the Ostend-Bruges International Airport, the Brussels-South Charleroi Airport, the Liège Airport and the Antwerp International Airport.[7] Other airports are military airports or small civil airports with no scheduled flights. Well-known military airports include the Melsbroek Air Base and the Beauvechain Air Base.