Transmetro is a bus rapid transit system in Guatemala City, Guatemala. The first line opened on February 3, 2007. The fleet consists of modern Volvo buses made by Ciferal in Brasil. The buses have fixed stops and partly run on dedicated lanes, avoiding other traffic. Both stops and vehicles are guarded by municipal police. Service began in 2007 with a route between the City Hall (Municipalidad) and a market place at Centra Sur (Southern Transfer Station). The second route, Eje Central, started operations on August 14, 2010. This route serves the central corridor between 6th and 7th Avenue of Zones 1, 4, and 9.

Buses run down the middle of the street, separated from other traffic, and stop at stations approximately every kilometre. The stations are in the middle of the street, located near areas of heavy pedestrian activity. Platforms are elevated so as to be level with the floor of the bus. Passengers may access the station via stairways, street crossings, or in some places, tunnels. Elevator access for the disabled is not presently available. However, individuals requiring accessible entry can cross the street to access transportation through gates painted with a wheelchair logo. Roofs in the stations are covered with a transparent plastic covering.

The buses are articulated Brazilian-made vehicles manufactured by Volvo and can carry approximately 100 passengers, including standing passengers.

Security is provided by Guatemala City's transit police. Officers in fluorescent yellow vests are situated at most stations on the route. Sometimes security personnel ride on the Transmetro.

The southern line was first completed with funding from the Municipal government of Guatemala city, however, the central line was funded by a private initiative. On February 3, 2007, when the buses started to operate on the southern line, regional buses or "Chicken Buses" were banned from entering the city from the south roads. This change effectively made travelling the CA1 much faster compared before the line began to work.

When the Transmetro first opened, it only accepted coins as the fare was set at Q1.00 (CAD$0.17). After the national government began service of the Transurbano, a local bus service similar to the ones in North American cities, it also began to accept the cashless prepaid card which had to be tapped to a reader. Passengers must pay the fare each time they enter the Transmetro, which means a two way trip costs Q2.00 regardless of where how far you go. On November 2015, payments by the prepaid card were no longer accepted due to a multitude of problems and disagreements. As of today, the payment can only be done by coins.

The second line to be opened, Corridor Central or Eje Central, runs through zones 4, 9, and 13 of Guatemala City. The buses are similar to the ones on Line 12, except for the Bi-articulated buses. The change in bus types was done to allow the line to travel through the historic centre as the streets are narrower compared to those of the CA1.

Another interesting difference between Line 12 and Line 13 is that, when Line 13 was still a proposal, the developer promised to revitalize the areas where the Line would eventually operate. This revitalization included new monuments, better sidewalks, improvement of street vendor spaces, and others.

Line 13 connects with Line 12 at "Plaza Barrios" and "El Calvario", creating seamless connections to the downtown and the southern areas of the city. Stations on this line are equipped with accessibility features such as braille that tells users the name of the stations and the connecting lines.

This line, as mentioned earlier, runs through the historic downtown, this means that during its journey it will pass by popular landmarks of the city such as the Torre del Reformador, the Acueducto de Pinula, the Bank of Guatemala, Civic Centre, and 6th Avenue, a popular pedestrian-only section of the city.

Line 13 was expanded to service further into zones 9 and 10, which due to road limitations forced it to be broken up into 2 segments. The ones listed above are part of the first segment and the ones below are part of the second segment.

Line 2 was another line that had some private sector support, the goal was to increase ease of travel between the Hipodromo district and the historic district. The colour for this route is similar to the one for Line 1, as they serve very similar areas. Line 2 also has an express service to provide direct connections between Zone 1, and the UMG university campus. The express service does not serve any other stations.

L6 or Eje Norte, runs from 18th Street in Zone 1 to Cementos Progreso Stadium in Guatemala's Zone 6, on its journey, it passes by the popular Colon Park (Parque Colon). Its stations began construction in October 2014 and the route was fully functional by April 25th of 2015[6]. A trip from one end to the other takes an average of 50 minutes[3]. 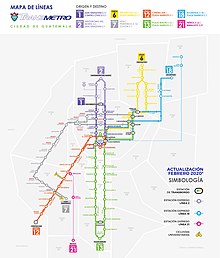 The most recent system map, as of March 2020. The map is also publicly available on the agency's twitter account and on stations.

As its name in Spanish describes, this line travels to the North West corner of the city. Departing from Plaza Barrios-FEGUA Station at 18th Street in Zone 1, ti travels through very important, high traffic areas and sites of interest like Colon Park. This line began operating on April 25th 2014 and continues to be under construction specially in the northern segment of the route to improve road conditions and exclusive traffic lane. This line also has an express service which bypasses most stations and travels directly to Paraiso Station, stopping at San Rafael Station on the way. Geographically, Paraiso is further than Atlantida, making it the northernmost station in the system. In early 2020, Transmetro completed the newest terminal station at Atlantida, renaming the terminal to "Centra Atlantida[7]". This new terminal also provides direct transfers to local Transurbano Routes in the 300 Series.

Line 21 started as a pilot project to measure sustainability, and conduct a user needs assessment for service to the USAC university campus[8], in the southern end of the city. The project began as an Express service between the temporary Trebolito Station, which was close to the Trebol Station, and a temporary Station at the municipal office in Zone 21. Th service has since become a permanent line which provides easier access to the university campus from Line 12. In 2019, the service was complimented by the opening of the Line 7 service which provides students with options for westbound service. The line is named after its southern terminus, located in Zone 21.

Line 7 is the newest Transmetro line, it began service in late 2019 and has now been fully enabled as a functioning line.[9] Line seven is intended to cover more suburban service, as well as provide more direct access to the USAC university campus. The line travel between Colon Station in Zone 1, through Zone 7, Zone 11, and terminates at the new USAC Periferico Station. Along the way, it makes direct transfers to Line 6 and 18, while also providing walking connections to Line 1 and 12.