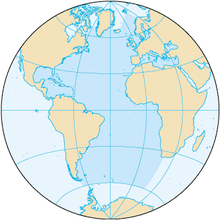 Transatlantic relations refer to the historic, cultural, political, economic and social relations between countries on both side of the Atlantic Ocean. Sometimes it specifically means relationships between the Anglophone North American countries (the United States and Canada), and particular European countries or organizations, although other meanings are possible.

There are a number of issues over which the United States and Europe generally disagree. Some of these are cultural, such as the U.S. use of the death penalty, some are international issues such as the Middle East peace process where the United States is often seen as pro-Israel and where Europe is often seen as pro-Arab, and many others are trade related. The current U.S. policies are often described as being unilateral in nature, whereas the European Union and Canada are often said to take a more multilateral approach, relying more on the United Nations and other international institutions to help solve issues. There are many other issues upon which they agree.

One potential definition of transatlantic relations. The United States (in red), Canada (in green), the European Union (in blue). Excluded from this definition are non-EU states in Europe, and all of Latin America and Africa.

It is proposed to create a Transatlantic Free Trade Area between the United States and European Union. Map shows potential other members: NAFTA, EFTA and future EU members.

Between a group and a state:

By language and culture

The boundaries of which states are part of Transatlantic relations depends on the context. The term may be used as a euphemism to a specific bilateral relationship, for example, Anglo-American relations. The boundary could be drawn so as only to refer member states of the EU plus the US, when discussing Euro-American relations. In other circumstances it may include Canada, or non-EU countries in Europe. The term may also be used in the context of the wider Atlantic world including Africa and Latin America.

Further information: European colonization of the Americas, Atlantic slave trade, and Battle of the Atlantic 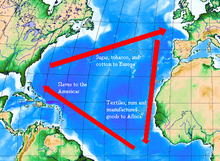 The triangular trade in the North Atlantic

The early relationship between Europe and America was based on colonialism and merchantilism. The majority of modern states in the Americas can be traced back to colonial states that were founded by European nations, states that were very different from the pre-Columbian civilizations and cultures that had existed before.

Even after the United States (and later Canada) became independent, the main relationship between the two continents was one-way migration.

Politically the United States tried to keep a distance from European affairs, and Canada was subordinate to British foreign policy.

During the First World War however both North American states found themselves fighting in Europe and engrossed in European politics. President Woodrow Wilson's Fourteen Points helped to redraw the map of Europe.

Although the Roosevelt administration wanted to enter the war against Germany, the vast majority of Americans were too isolationist and disillusioned at their experience in World War I to seek involvement in the World War II, at least until the U.S. was attacked by Japan at Pearl Harbor on December 7, 1941, and Adolf Hitler declared war on the United States on December 11, 1941. Once involved, the US became pivotal to the war effort and therefore European politics.

After the second war the United States and Canada both desired a permanent role in the defence of Europe, and European states wanted protection from the Soviet Union. The result was the North Atlantic Treaty Organization, which became the lynchpin of Transatlantic relations during the Cold War.

Atlanticism is a philosophy which advocates for close cooperation between North America and Europe.