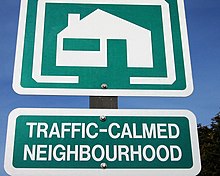 Signing indicating that a motorist is approaching traffic calming devices.

Traffic calming uses physical design and other measures to improve safety for motorists, pedestrians and cyclists. It has become a tool to combat speeding and other unsafe behaviours of drivers in the neighbourhoods.[1] It aims to encourage safer, more responsible driving and potentially reduce traffic flow. Urban planners and traffic engineers have many strategies for traffic calming, including narrowed roads and speed humps. Such measures are common in Australia and Europe (especially Northern Europe), but less so in North America. Traffic calming is a calque (literal translation) of the German word Verkehrsberuhigung – the term's first published use in English was in 1985 by Carmen Hass-Klau.[2]

In its early development in the UK in the 1930s, traffic calming was based on the idea that residential areas should be protected from through-traffic. Subsequently, it became valued for its ability to improve pedestrian safety and reduce noise and air pollution from traffic.[citation needed]

For much of the 20th century, streets were designed by engineers who were charged only with ensuring smooth motor vehicular traffic flow and not with fostering the other functions of streets. Traffic calming initiatives have grown to consider other design functions as well. For example, it has been shown that car traffic severely impairs the social and recreational functions of public streets. The Livable Streets study by Donald Appleyard (1981)[3] found that residents of streets with light traffic had, on average, three more friends and twice as many acquaintances as the people on streets with heavy traffic which were otherwise similar in dimensions, income, etc.

Engineering measures involve physically altering the road layout or appearance to actively or passively retard traffic by one of several means:

Measures include speed humps, chicanes, kerb extensions, and living street and shared space type schemes. The town of Hilden in Germany has achieved a rate of 24% of trips being on two wheels, mainly via traffic calming and the use of 30 km/h or 20 mph zones.[5] In 1999, the Netherlands had over 6000 woonerven where cyclists and pedestrians have legal priority over cars and where a motorised "walking speed" limit applies.[6] However, some UK and Irish "traffic calming" schemes, particularly involving road narrowings, are viewed as extremely hostile and have been implicated directly in death and injury to cyclists and pedestrians.[7][8]

A number of visual changes to roads are being made to encourage more attentive driving, reduced speed, reduced crashes, and a greater tendency to yield to pedestrians. Visual traffic calming includes lane narrowings (9-10'), road diets (reduction in lanes), use of trees next to streets, on-street parking, and buildings placed in urban fashion close to streets.

Physical devices include speed humps, speed cushions and speed tables, sized for the desired speed. Such measures normally slow cars to between 10 and 25 miles per hour (16 and 40 km/h). Most devices are made of asphalt or concrete but rubber traffic calming products are emerging as an effective alternative with several advantages.

Traffic calming can include the following engineering measures, grouped by similarity of method:[9] 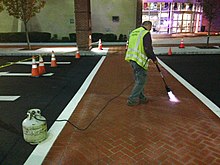 Construction of polymer cement overlay to change asphalt to brick texture and colour to indicate a high-traffic pedestrian crossing.

Changes in texture may also include changes in color to highlight to drivers that they are in a pedestrian-centric zone.

Quite often residents have used a variety of homemade devices ranging from faux enforcement camera signs and even faux speed cameras and including dummy police. Some Canadian communities erect flexible bollards in the middle of the street in school zones. The bollards have a sign affixed indicating a 40 km/hr speed limit.

Enforcement and education measures for traffic calming include:

Speed reduction has traditionally been attempted by the introduction of statutory speed limits. Traffic speeds of 30 km/h (20 mph) and lower are said to be more desirable on urban roads with mixed traffic.[12] The Austrian city of Graz, which has achieved steady growth in cycling, has applied 30 km/h limits to 75% its streets since 1994.[13] Zones where speeds are set at 30 km/h (or 20 mph) are gaining popularity [14] as they are found to be effective at reducing crashes and increasing community cohesion.[15] Speed limits which are set below the speed that most motorists perceive to be reasonable for the given road require additional measures to improve compliance. Attempts to improve speed limit observance are usually by either education, enforcement or road engineering. "Education" can mean publicity campaigns or targeted road user training.

Speed limit enforcement techniques include: direct police action, automated systems such as speed cameras or vehicle activated signs or traffic lights triggered by traffic exceeding a preset speed threshold. One cycling expert argues for placing direct restrictions on motor-vehicle speed and acceleration performance.[16] An EU report on promoting walking and cycling specifies as one of its top measures comprehensive camera-based speed control using mainly movable equipment at unexpected spots.[17] The Netherlands has an estimated 1,500 speed/red-light camera installations and has set a target for 30 km/h limits on 70% of urban roads. The UK has more than 6,000 speed cameras, which took more than £100 million in fines in 2006/07.[18]

Examples around the world

Traffic calming has been successfully used for decades in cities across Europe. For example, a living street (sometimes known as home zones or by the Dutch word woonerf, as the concept originated in the Netherlands) towards the end of the 1960s, initially in Delft, is a street in which the needs of car drivers are secondary to the needs of other road users; traffic calming principles are integrated into their design. From the Netherlands, the concept spread rapidly to Germany, starting in North Rhine-Westphalia in 1976, and had become very widespread by the early 1980s. The ideas and techniques also spread to the UK towards the end of the 1980s, and practice there was advocated by academics such as Tim Pharaoh and Carmen Hass-Klau. The guidelines published by Devon County Council (of which Tim Pharaoh was the principal author) in 1991 were particularly well received.[19]

The Harrison and 23rd Street Crash Response Project was proposed by the Oakland Department of Transportation (OakDOT) in June 2017 after the death of 68-year-old Oakland resident Robert Bennett (Ferrara 2017).

In response to the fatality and the subsequent protests by Walk Oakland Bike Oakland, Oakland's Department of Transportation (OakDOT) committed to make Harrison Street more conducive to pedestrians (Tadayon 2017). With a Traffic Engineering Technical Assistance Program grant from the Metropolitan Transportation Commission, the City of Oakland implemented changes that were part of the Vision Zero immediate crash response initiative. Harrison Street was historically a high injury corridor with a concentration of severe traffic-related collisions with “1.8 KSI (kills & serious injuries) per mile” and high speeds with 60% of vehicles over the legal limit (Harrison & 23rd St Crash Response). This problem was exacerbated by the six lanes of traffic on Harrison Street.

In addition to eliminating the left turn from 23rd Street onto Harrison Street, OakDOT's traffic calming scheme notably reduced the number of lanes on Harrison St from six to four. In place of the omitted lanes of traffic, OakDOT elected to add bicycle lanes in each direction and larger median (Harrison & 23rd St Crash Response). The revised median protects pedestrians by giving them more space to stand and added protection from permanent bollards while incorporating curbed ramps to ensure that they can be used by individuals with wheelchairs and strollers. Moreover, bulb-outs were added on each corner of the intersection to slow traffic while protecting pedestrians by reducing the amount of roadway they must cross. The enlarged median and bulb-outs were also painted bright purple making it more visible to drivers with the intention of reducing confusion and effectively making the intersection safer for pedestrians.

Since July 2017, OakDOT added to the original edition of the initiative. The revised edition, supported by the Lakeside Family Streets project and completed in 2019, replaced on street parking on Harrison Street between 20th Street to 27th Street with protected bike lanes. In conjunction with the additional bike lanes, the plan includes protected intersections for cyclists along Harrison Street to omit the need for dangerous mixing zones.

Various forms of traffic calming are used in Japanese cities, particularly in large cities like Tokyo and Yokohama. Tokyo's narrow streets force automobiles and pedestrians to be close to one another; a common traffic calming technique in Tokyo is to change the surface material and/or texture of the shoulder of narrow roads,[22] which helps define the boundary between cars and pedestrians, while allowing cars to use those spaces to pass oncoming traffic.

A Cochrane Review of studies found that there is evidence to demonstrate the efficacy of traffic calming measures in reducing traffic-related injuries and may even reduce deaths. However, the review found that more evidence is needed to demonstrate its efficacy in low income countries.[23]

According to right wing libertarian economic commentator and smart growth critic Randal O'Toole, the main goal of traffic calming is to increase traffic congestion for the sake of social engineering. He claims that some traffic calming measures such as reverting one way roads into two-way roads or creating "bump outs" have increased motor traffic congestion, resulted in more accidents and increased pedestrian fatalities.[24] However, Florida urban planner Dom Nozzi argues that "[c]ongestion is a powerful disincentive for sprawl; sprawl that steamrolls outlying ecosystems. With congestion, the sprawl market wither."[25]