A factory at Bathurst (Gambia) around 1900 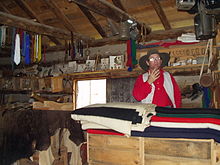 A trading post, trading station, or trading house, also known as a factory, was an establishment or settlement where goods and services could be traded.

Typically the location of the trading post would allow people from one geographic area to trade in goods produced in another area. In some examples, local inhabitants could use a trading post to exchange local products for goods they wished to acquire.[1]

Major towns in the Hanseatic League were known as kontors, a form of trading posts.[2]

Charax Spasinu was a trading post between the Roman and Parthian Empires.[3]

Manhattan and Singapore were both established as trading posts, by Dutch and British colonists respectively, and later developed into major settlements.