Wikipedia:Citation needed Administrative division Village
Designation for types of settlement as administrative territorial entities
For other uses, see Township (disambiguation).
Not to be confused with Dispersed settlement.

Township refers to various kinds of settlements or administrative subdivisions in different countries.

While a township may be associated with an urban area, this tends to be an exception to the rule. In Australia, Canada, Scotland and parts of the United States, the term refers to settlements too small or scattered to be considered urban.

In Australia, the designation of "township" traditionally refers to a small town or a small community in a rural district; such a place in England might qualify as a village or a hamlet.[citation needed] The term refers purely to the settlement; it does not refer to a unit of government; townships are governed as part of a larger (e.g., shire or city) council.[citation needed]

In Canada, two kinds of township occur in common use.

Main article: Townships of the People's Republic of China

In China, townships are found at the fourth level of the administrative hierarchy, below counties, districts and county level cities; above villages and communities, together with ethnic townships, towns and subdistricts.

In India, townships are found at the fourth level of the city.

In Jersey, a township is a redundant term, as the only surviving local government level at present are the 12 parishes of the island.

In Malaysia, townships are found at the third level of the administrative hierarchy, is subdivision of a daerah (district or county) or autonomous sub-district (daerah kecil), while above kampung (village) and taman[disambiguation needed] (residential neighbourhood) as per Section 11(c) of the National Land Code 1965.

In local government in New Zealand, there are no longer towns or townships. All land is part of either a "city" (mostly urban) or a "district" (mostly rural). The term "municipality" has become rare in New Zealand since about 1979 and has no legal status.

The term "township" is, however, still in common usage in New Zealand, in reference to a small town or urban community located in a rural area. The expression would generally equate to that of "village" in England.[citation needed]

In the Philippines, "townships" referred to administrative divisions established during the American Civil Government in the country. Many of these political divisions were originally established as rancherias during the Spanish Regime. The term was later replaced with "municipal district".[1] Most municipal districts would later be converted into regular municipalities by executive orders from the Philippine President.[2]

Currently, Mambukal, a hill station geographically located in Murcia, Negros Occidental, is the only legally constituted township in the Philippines, created under Republic Act No. 1964, approved June 22, 1957.[citation needed]

In the context of Russian Empire, the Soviet Union, and CIS states, the term is sometimes used to denote a small semi-urban, sometimes industrial, settlement and used to translate the terms поселок городского типа (townlet), посад (posad), местечко (mestechko, from Polish "miasteczko", a small town; in the cases of predominant Jewish population the latter is sometimes translated as shtetl).[citation needed]

In South Africa, under apartheid, the term township (or location), in everyday usage, came to mean a residential development that confined non-whites (Blacks, Coloureds, and Indians) living near or working in white-only communities. Soweto ("SOuth-WEstern TOwnships") and Mdantsane are well-known examples. However, the term township also has a precise legal meaning and is used on land titles in all areas, not only traditionally non-white areas.[citation needed] 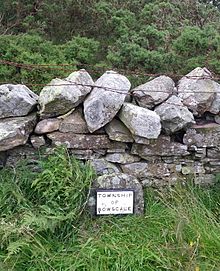 Township boundary marker at Mungrisdale, Cumbria. The marker has been restored for historical purposes.

In England, the term township is no longer in official use, but the term still has some meaning.

In England, "township" referred to a subdivision used to administer a large parish.[3] This use became obsolete at the end of the 19th century, when local government reform converted many townships that had been subdivisions of ancient parishes into the newer civil parishes in their own right. This formally separated the connection between the ecclesiastical functions of ancient parishes and the civil administrative functions that had been started in the 16th century. Recently, some councils, normally in the north of England, have revived the term.

In Scotland, the term is still used for some rural settlements. In parts of the Highlands and Islands, a township is a crofting settlement. In the Highlands generally the term may describe a very small agrarian community.

For townships in Wales, which were created by an Act of Parliament in 1539 see: Townships in Montgomeryshire.

There are two types of townships in the United States; a state may have one or both types. In states that have both, the boundaries often coincide in many counties.

When after the Treaty of Paris, the U.S. did its first census of Puerto Rico the documents called them "barrios" as they had been called when Puerto Rico was under Spanish rule.[4] The townships or barrios as they are called in P.R. and on U.S. Census documents are subdivisions of municipalities of Puerto Rico.[5][6]

In Vietnam, a commune-level town (thị trấn) is very similar to a township; it is a subdivision of a rural district (huyện) and is the lowest administration subdivision in the country.[citation needed]

In Zimbabwe, the term township was used for segregated parts of suburban areas. During colonial years in Rhodesia, the term township referred to a residential area reserved for black citizens within the boundaries of a city or town and is still commonly used colloquially. This reflected the South African usage.

In modern Zimbabwe, the term is also used to refer to a residential area within close proximity of a rural growth point.[7]