Times Square in Midtown Manhattan, New York City, is the hub of the Broadway theater district and a media center. The intersection also has one of the highest annual attendance rates of any tourist attraction in the world, estimated at 50 million.[1]

The Taj Mahal in Agra, India, a popular tourist attraction. More than 7-8 million visit the Taj Mahal each year.

The Colosseum in Rome, Italy, with 7.4 millions of tourist, is one of the most popular tourist attraction in the world. 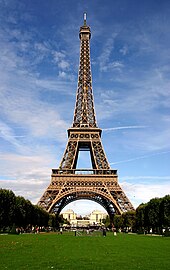 The Christ the King statue in Almada, Portugal, has become a popular tourist attraction.

A tourist attraction is a place of interest where tourists visit, typically for its inherent or an exhibited natural or cultural value, historical significance, natural or built beauty, offering leisure and amusement.

Tropical beaches and Balinese culture are attractions that draw tourists to this popular island resort, such as Melasti rituals performed on the beach.

Ethnic communities may become tourist attractions, such as Chinatowns in the United States and the black British neighbourhood of Brixton in London, England.

In the United States, owners and marketers of attractions advertise tourist attractions on billboards along the sides of highways and roadways, especially in remote areas. Tourist attractions often distribute free promotional brochures to be displayed in rest areas, information centers, fast food restaurants, and motel rooms or lobbies.

While some tourist attractions provide visitors a memorable experience for a reasonable admission charge or even for free, others may be of low quality and overprice their goods and services (such as admission, food, and souvenirs) in order to profit excessively from tourists. Such places are commonly known as tourist traps.

Within cities, rides on boats and sightseeing buses are sometimes popular.

Novelty attractions are oddities such as the "biggest ball of twine" in Cawker City, Kansas, the Corn Palace in Mitchell, South Dakota, or Carhenge in Alliance, Nebraska, where old cars serve in the place of stones in a replica of Stonehenge. Novelty attractions are not limited to the American Midwest, but are part of Midwestern culture.[2]

A tropical island resort is an island or archipelago that depends on tourism as its source of revenue. The Bahamas in the Caribbean, Bali in Indonesia, Phuket in Thailand, Hawaii in the United States, Fiji in the Pacific, and Santorini and Ibiza in the Mediterranean are examples of popular island resorts.

France, the United States, and Spain were the three most popular international destinations in 2017. The total number of international travelers arriving in those countries was about 234 million,[4] contributing 8.9%, 7.7%, and 14.9%, respectively, to the total GDP of those countries.[5]

Although some years back, Africa was lean on tourism, the continent is currently regarded as the second fastest growing tourism region with over 67 million tourists visits to Africa in 2018. Ethiopia with a growth rate of 48.6% in 2018, is at the top of the list of African tourist centers.[6] Other tourist locations in Africa include Cape Town, South Africa, Giza Necropolis, Egypt, The Maasai Mara National Reserve, Kenya, Victoria Falls, Zimbabwe and Zambia.[7]

Tourism generates substantial economic benefits for both host countries and tourists' home countries. Especially in developing countries, one of the primary motivations for a region to promote itself as a tourism destination is the expected economic benefit. According to the World Tourism Organization, 698 million people travelled to a foreign country in 2000, spending more than US$478 billion. International tourism receipts combined with passenger transport currently total more than US$575 billion – making tourism the world's number one export earner.[11]