Maize Mesoamerica Flatbread
type of bread
This article is about the flatbread. For the potato omelette, see Spanish tortilla. For other uses, see Tortilla (disambiguation).

A tortilla (/tɔːrˈtiːə/, Spanish: [toɾˈtiʎa]) is a type of thin flatbread, typically made from wheat flour or nixtamalized corn. The Aztecs and other Nahuatl speakers call tortillas tlaxcalli ([t͡ɬaʃˈkalli]).[1] First made by the indigenous peoples of Mesoamerica before European contact, tortillas are a fundamental part of the cuisines of many countries of the American continent. The origin of the corn tortilla in Mesoamerica dates back to before 500 BC. A nopaltilla is a cactus-corn tortilla. 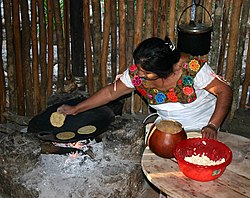 Tortillas made with maize (corn) are the oldest variety of tortilla and remain popular in North, Central, and South America. evidence shows the peoples of the Oaxaca region in Mexico made tortillas at the end of the Villa Stage (1500 to 500 BC).[2][page needed]Toward the end of the 19th century, the first mechanical utensils for making tortillas, called tortilla presses, tortilleras, or tortilladoras, were invented and manufactured in Mexico.

Wheat tortillas usually contain fats such as oil or lard, salt, often leavening agents such as baking powder, and other ingredients. Otherwise, the preparation and cooking of flour tortillas on a comal is identical to that of corn tortillas. Flour tortillas are commonly used in dishes like burritos, tacos, and fajitas. It is part of the daily food repertoire in throughout Mexico, whose gastronomy and culture has influenced those of many Central American countries and some states in the U.S.

A nopaltilla is a cactus-corn tortilla. The word is a portmanteau of nopal, Spanish for the Opuntia ficus-indica cactus, and tortilla.[3][4]