The former Toronto Sun building at 333 King Street East in 2007. 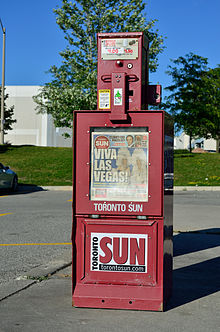 The Sun was first published on November 1, 1971, the Monday after the demise of the Toronto Telegram, a conservative broadsheet.[3] As there was no publishing gap between the two papers and many of the Tely's writers and employees moved to the new paper, it is today generally[who?] considered as a direct continuation of the Telegram. The Sun is the holder of the Telegram archives.

The Sun is owned by Postmedia following the 2015 purchase of Sun Media from Quebecor. Torstar, the parent company of the Toronto Star, once attempted to purchase the Sun. The paper, which boasts the slogan "Toronto's Other Voice" (also once called "The Little Paper that Grew") acquired a television station from Craig Media in 2005, which was renamed SUN TV and later was transformed into the Sun News Network until its demise in 2015. By the mid-2000s, the word "The" was dropped from the paper's name and the newspaper adopted its current logo.

The Toronto Sun's first editor was Peter Worthington. He assumed the title "editor-in-chief" in 1976, resigned in 1982 to protest the newspaper's takeover by Maclean-Hunter but remained a columnist for the paper until his death in 2013. He was succeeded by Barbara Amiel who, in turn, was succeeded by John Downing (as editor). Other senior editors have included Lorrie Goldstein (city editor, editorial page editor), Linda Williamson (senior associate editor), Rob Granatstein (editorial page editor), and as editors-in-chief: Peter O'Sullivan, Mike Strobel, Jim Jennings, Glenn Garnett (2006–2007), Lou Clancy (2007–2009), James Wallace (2008–2013) and Wendy Metcalfe (2013-2015). The current editor-in-chief is Adrienne Batra; the publisher is Mike Power.

The Toronto Sun was originally published out of leased space at the Eclipse White Wear Company Building at 322 King Street West. In 1975, the newspaper moved into the Toronto Sun Building at 333 King Street East which was eventually expanded to six storeys to house all of the newspaper's operations. In 2010, the building was sold to property development company First Gulf, the Sun consolidated its operations onto the second floor and remained in the building until 2016.

Following the acquisition of the Sun newspaper chain by PostMedia in 2015, it was announced that the Toronto Sun staff and operations will move to 365 Bloor Street East, the same building that houses the National Post, but that the two newspapers will maintain separate newsrooms. The move occurred in March 2016.[5]

Sportsperson of the Year award

In 2004, the Sun began its annual George Gross/Toronto Sun Sportsperson of the Year award.[6]

The Toronto Sun has seen—like most Canadian daily newspapers—a decline in circulation. Its total circulation dropped by 36 percent to 121,304 copies daily from 2009 to 2015.[7]

The Toronto Sun's format has given rise to sister Sun newspapers in major markets across Canada, namely the Edmonton Sun, the Calgary Sun and the Ottawa Sun. The Winnipeg Sun was originally launched by independent interests, only later coming under common ownership to the Toronto Sun, which subsequently elicited a redesign in Sun Media style.

The Toronto Sun originally had several editors with various responsibilities, none with the title "editor-in-chief"; however, from 1971 to 1976, Peter Worthington was listed on the newspaper's masthead immediately under the publisher, Doug Creighton.