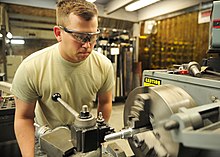 A machinist on a lathe

Tool and die makers are a class of machinists in the manufacturing industries. Variations on the name include tool maker, toolmaker, die maker, diemaker, mold maker, moldmaker or tool jig and die-maker, or Fitter, depend on which area of concentration or industry an individual works in.

Tool and die makers work primarily in toolroom environments—sometimes literally in one room but more often in an environment with flexible, semipermeable boundaries from production work. They are skilled artisans (craftspeople) who typically learn their trade through a combination of academic coursework and hands-on instruction, with a substantial period of on-the-job training that is functionally an apprenticeship (although usually not nominally today). They make jigs, fixtures, dies, molds, machine tools, cutting tools, gauges, and other tools used in manufacturing processes.[1]

Traditionally, working from engineering drawings developed by the toolmaker, engineers or technologists, tool makers lay out the design on the raw material (usually metal), then cut it to size and shape using manually controlled machine tools (such as lathes, milling machines, grinding machines, and jig grinders), power tools (such as die grinders and rotary tools), and hand tools (such as files and honing stones).

Art and science (specifically, applied science) are thoroughly intermixed in their work, as they also are in engineering. Manufacturing engineers and tool and die makers often work in close consultation as part of a manufacturing engineering team. There is often turnover between the careers, as one person may end up working in both at different times of their life, depending on the turns of their particular educational and career path. There was no codified difference between them during the 19th century and earlier parts of the 20th century; it was only after World War II that engineering became a regulated profession exclusively defined by a university or college engineering degree. Both careers require some level of talent in both artistic/artisanal/creative areas and math-and-science areas.

Since the advent of computing in the manufacturing fields (including CNC, CAD, CAM, and other computer-aided technologies), tool and die makers have increasingly added IT skills to their daily work. Today's tool and die makers are generally required to have all of the traditional skills plus substantial digital skills; these formidable requirements make the field challenging to master.

Although the details of training programs vary, many tool and die makers begin an apprenticeship with an employer, possibly including a mix of classroom training and hands-on experience. Some prior qualifications in basic mathematics, science, engineering science or design and technology can be valuable. Many tool and die makers attend a 4- to 5-year apprenticeship program to achieve the status of a journeyman tool and die maker. Today's employment relationships often differ in name and detail from the traditional arrangement of an apprenticeship, and the terms "apprentice" and "journeyman" are not always used, but the idea of a period of years of on-the-job training leading to mastery of the field still applies.

In the United States, tool and die makers who graduate from NTMA (National Tooling and Machining Association) have gone through 4 years of college courses as well as 10,000 working hours in order to complete their apprenticeship. They are also accredited through the U.S. Department of Labor.

A jig and fixture maker is under the faction of a tool and die maker/toolmaker. The standard differentiation of jigs from fixtures is that a jig guides the tool for the operation being carried out while a fixture simply secures the work. The terms are sometimes used interchangeably. A jig and fixture maker needs to know how to use an assortment of machines to build these devices such as having skills in welding and in some cases the knowledge of wood working equipment, of course with the tool room machining skills.

They are often advised by an engineer in building the devices. A wide knowledge of various materials is needed beyond wood and metal such as plastics. They also can create, design and build without engineering plans/bluprints.

Jig/fixture makers gain hands on practical experience while monitoring and making alterations as the manufacturing process is constantly improved and reviewed with/by engineering. They also can be required to make these adjustments without engineering help, depending on the size of the company. Some Jigs and fixtures require electronic and pneumatic actuation, which will involve knowledge/training in these fields as well.

Properly built jigs and fixtures reduce waste by ensuring perfectly fitting parts. Jigs and fixtures can be as big as a car or be held in hand. Production needs dictate form and function. Jigs, fixtures and gages are needed to maintain quality standards for repeated low and high volume production demands.

Ongoing evolution of computerized design and control technologies, such as CAD/CAM, CNC, PLC, and others, has limited the use of jigs in manufacturing, however all the computer run machines need some sort of clamping fixture for production runs. A common example is that a drill jig is not needed to guide the drill bits to the hole centers if it is done on a CNC, since it is Computer Numerically Controlled. However, fixtures are still needed to hold the part[s] in place for the operation needed. Jigs are currently needed in many areas of manufacturing but mainly for low-volume production.

Die making is a subgenre of tool making that focuses on making and maintaining dies. This often includes making punches, dies, steel rule dies, and die sets. Precision is essential in die making; punches and die steels must maintain proper clearance to produce parts accurately, and it is often necessary to have components machined with tolerances of less than one thousandth of an inch.

Tool making typically means making tooling used to produce products. Common tooling includes metal forming rolls, cutting tools (such as tool bits and milling cutters), fixtures, or even whole machine tools used to manufacture, hold, or test products during their fabrication. Due to the unique nature of a tool maker's work, it is often necessary to fabricate custom tools or modify standard tools.

One person may be called upon for all of the above activities, and the skills and concepts involved overlap, which is why tool and die making is often viewed as one field.