Katsudon Japanese curry Cutlet
Not to be confused with the regional Japanese ramen dish Tonkotsu.

Tonkatsu (豚カツ, とんかつ or トンカツ, pronounced [toŋꜜkatsɯ]; "pork cutlet") is a Japanese dish that consists of a breaded, deep-fried/tempura pork cutlet. It involves cutting the pig's back center into 2-3 centimeter thick slices, coating with panko (bread crumbs), frying them in oil, and then serving with Japanese Worcestershire sauce, rice, and vegetable salad (mainly cabbage). The two main types are fillet and loin. Tonkatsu is often served with shredded cabbage, or on a bed of rice (making it a donburi dish, called Katsudon).

The word tonkatsu is a combination of the Sino-Japanese word ton (豚) meaning "pig" and katsu (カツ), which is a shortened form of katsuretsu (カツレツ), the transliteration of the English word cutlet, which again derived from French côtelette, meaning "meat chop".

Tonkatsu originated in Japan in the 19th century. Early katsuretsu was usually beef; the pork version was invented in Japan in 1899 at a restaurant called Rengatei in Tokyo.[1][2][3] It was originally considered a type of yōshoku — Japanese versions of European cuisine invented in the late 19th and early 20th centuries—and was called katsuretsu or simply katsu.[4]

Either a pork fillet (ヒレ, hire) or pork loin (ロース, rōsu) cut may be used; the meat is usually salted, peppered, dredged lightly in flour, dipped into beaten egg and then coated with panko (bread crumbs) before being deep fried.[5]

In addition to being served as a single dish, it is used as a sandwich filling or in combination with curry. 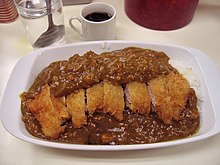 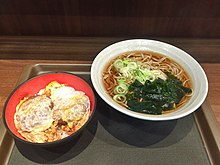 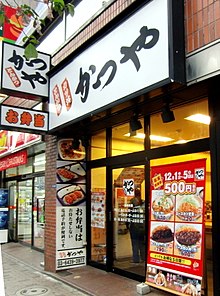 Tonkatsu is also popular as a sandwich filling (katsu sando) or served on Japanese curry (katsu karē). Tonkatsu is sometimes served with egg on a big bowl of rice as katsudon.

In Nagoya and surrounding areas, miso katsu, tonkatsu eaten with a hatchō miso-based sauce, is a speciality.[8]

Variations on tonkatsu may be made by sandwiching an ingredient such as cheese or shiso leaf between the meat, and then breading and frying. For the calorie conscious, konnyaku is sometimes sandwiched in the meat.[citation needed]

Several variations of tonkatsu use alternatives to pork:

A similar dish with ingredients other than pork, beef, or chicken is called furai (fry), not katsu (cutlet), such as aji-furai (fried horse mackerel) and ebi-furai (fried prawn).[9]

In Isekai Shokudo light novel series, Pork loin Tonkatsu is the favourite food of Altorius who loves it so much, he strictly enjoyed it only with tonkatsu sauce and beer, refusing to even try any other variations such as Katsu Curry.