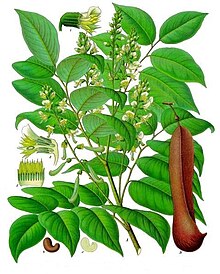 Tolu balsam is a balsam that originates from South America (Colombia, Peru, Venezuela). It is similar to (and frequently confounded with) the balsam of Peru.

It is tapped from the living trunks of Myroxylon balsamum (see Myroxylon). It is a brownish, sticky, semisolid mass.[1] An essential oil is also distilled from the balsam. The balsam contains a fairly large amount of benzyl and cinnamyl esters of benzoic and cinnamic acid (benzyl benzoate, benzyl cinnamate).[2]

The resin is still used in certain cough syrup formulas. However its main use in the modern era is in perfumery, where it is valued for its warm, mellow yet somewhat spicy scent.

It is also used as a natural remedy for skin rashes. It is a well known cause of contact dermatitis, a form of skin allergy.

Tolu has begun to be used in the niche perfume industry, notably by Ormonde Jayne Perfumery, which launched its oriental perfume Tolu in 2002, and also in 2010 by Esteban, which launched Baume Tolu.

In 1841, Henri Étienne Sainte-Claire Deville isolated toluene by the dry distillation of tolu balsam.[3] The resin is used in traditional medicine by the people of Central America and South America.[4] It is named for Tolú, one the pre-Columbian indigenous people of the North Colombia lowlands.[5]